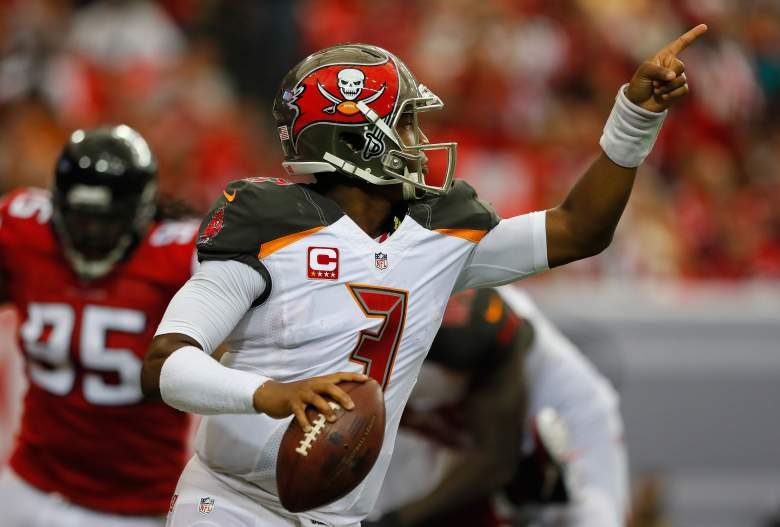 The Arizona Cardinals beat the Tampa Bay Buccaneers 40-7 in a dominant fashion at University of Phoenix Stadium on Sunday. Arizona scored early and often, while Tampa Bay couldn’t get out of their own way.

The Buccaneers committed three turnovers in the first-half and trailed 24-0 by halftime.

Cardinals quarterback Carson Palmer had an excellent game, completing 18 of 31 passes for 308 yards and three touchdowns, with no turnovers.

All three of Palmer’s scoring passes came in the first half to Larry Fitzgerald, Michael Floyd and Jaron Brown.

Larry Fitzgerald caught a 4-yard touchdown pass as he dove across the end zone to give Cardinals a 7-0 lead with 14:59 to go in the second quarter. It marked Fitzgerald’s 101st career touchdown reception.

The Cardinals capped off a 6-play, 14-yard drive with a 22-yard field goal to add to their lead.

Charles Sims knocked the ball loose from Jameis Winston’s hand with his shoulder as Winston was about to pass. Cardinals safety Tony Jefferson recovered it, to mark the Bucs’ third turnover of the day.

Carson Palmer then led an 8-play, 68 yard drive to advance to Cardinals lead to 17-0. Palmer connected with Michael Floyd in the end zone for a 1-yard touchdown with 1:30 left in the second quarter.

Cardinals took a 24-0 lead at the half with a beautiful 51-yard touchdown pass with 20 seconds left.

Palmer has completed 15 of 27 passes for 213 yards and 3 touchdowns. Brown leads in receiving with 2 receptions for 78 yards.

Tampa Bay starts the second half on the right foot and gets on the board with a Mike Evans TD reception! https://t.co/hmlj2TXH43

Winston had 77 yards in the first half, then passed for 75 to open the second half. Winston went 6-for-8 for a touchdown to Mike Evans to cut the Cardinals lead to 24-7 with 10:01 left in the third quarter.

Jameis Winston was picked off again by Marcus Cooper who made a 60-yard interception return. It marked Winston’s third interception of the game and the fourth turnover for Tampa Bay. The Cardinals have a dominating 33-7 lead with 5:03 left in the third quarter.

Just get the ball to @DaJohnson7… And watch him WORK!

Palmer led an 8 play, 65-yard touchdown drive. Chris Johnson scored a touchdown on a 3-yard rush to give the Cardinals a 40-7 lead.

The Tampa Bay Buccaneers will travel west as they face the Arizona Cardinals in Week 2 of the NFL.

Bucs quarterback Jameis Winston is coming off one of his best games in a 31-24 season-opening win at Atlanta.

Winston completed 23 of 33 passes for 281 yards and four touchdowns, a showing that earned NFC offensive player of the week honors.

Arizona fell 23-21 to the Patriots in Week 1. Carson Palmer threw 271 yards, two touchdowns and no interceptions.

Larry Fitzgerald kept the Cardinals in the game late in the fourth quarter with a touchdown catch, for his second score of the night. He finished the night with eight catches for 81 yards.

Last Sunday, Martin rushed for 62 yards on 18 carries and caught five passes for 34 yards. Johnson had 89 yards on 16 attempts and caught four for 43 yards.