Florida State is expected to start Deondre Francois at quarterback when the team kicks off the 2016 season against Ole Miss tonight in Orlando.

The comparisons between the red shirt freshman and Jameis Winston have already been the subject of much debate. Here is a look at the connection between the two, and how Francois is handling the lofty expectations.

Winston had his first opportunity to start for the Seminoles in 2013. In the 41-13 win over Pittsburgh, he clearly made his case as the next rising college quarterback with a four-touchdown performance. Winston went on to win the Heisman and led Florida State to the national title before becoming the No.1 overall pick in the 2015 NFL draft.

“That’s why I came to Florida State, to be in that position,” Francois told the paper. “He (Winston) was real crisp in that game and poised.” 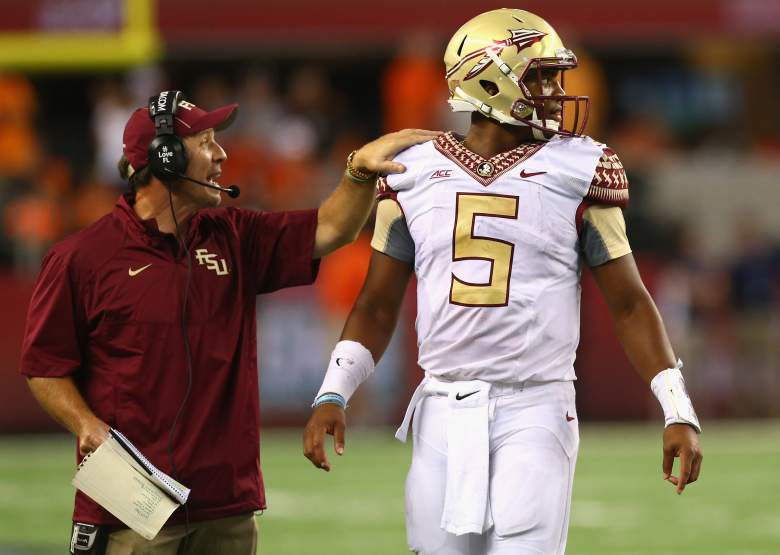 When asked for a comparison in August, Florida State head coach Jimbo Fisher would not offer one and called it “unfair.”

Fisher has a point. While both quarterbacks displayed elite numbers in their respective high school careers, it is hard to draw similarities between a starting NFL quarterback and one who hasn’t taken his first college snap.

While Winston and Francois have their differences, they both carry a commanding confidence.

“Deondre and Jameis have that similar swagger to them,” receiver Travis Rudolph told ESPN.

As a redshirt freshman, Winston was expected to take charge of the Florida State offense, Francois now finds himself in that same position.

Francois is “confident — everything he does, he wants to do it to perfection,” running back Dalvin Cook said to ESPN. “He goes about things a whole other way. The maturity level, he’s confident and has that leadership.”

And according to Cook, that’s the biggest similarity between Winston and Francois.

“Jameis was one of those guys that demanded perfection, if things weren’t done right we’d start over. I was blessed to be able to play with him,” Cook told the paper. “Francois is the same way in that he comes to practice every day with a purpose, he’s confident in what he does. That’s the biggest thing that compares about the two.”

Fisher is known for being a perfectionist, and that can be extremely tough on his players. However, Winston is encouraging Francois to take it in stride.

“The hardest challenge for me was Coach Fisher because he’s a perfectionist,” Winston told the Tallahassee Democrat. “He’s going to push his quarterback to the limit and that’s why I’m excited to see how we (FSU) look this year because I know Deondre has a great coach.”

Winston advised Francois to trust himself, and trust his team.

“Just play with your instincts. A lot of people say college is faster than high school and it is,” Winston said, according to the paper.

“But go play with your instincts, trust your coaching and trust your teammates.”

4. Francois Said He Isn’t Comparing Himself to Anyone

Francois isn’t necessarily shying away from the Winston comparison, but has said in multiple interviews he is only focusing on himself.

“If people want to compare me to Jameis, they can do that. I’m not comparing myself to anyone,” Francois said, according to ESPN. “I’m just trying to go out there and do the best that I can.”

5. Francois Is the First Redshirt Freshman to Start at Quarterback Since Winston

On Sunday, Francois will become the first redshirt freshman to start at quarterback since Winston did in 2013. Both were labeled as upcoming stars even before playing their first college game. Whether Francois is able to live up to Winston’s impressive results in his first season remains to be seen.

Although it’s hard to predict how a rookie quarterback will respond to the pressure of his first college start, Ole Miss coach Hugh Freeze is fully aware of Francois’ talents as a dual-threat quarterback.

“I remember vividly that we thought Deondre was a tremendous athlete with a big arm,” Freeze said, according to The Florida-Times Union. “He’s got the skill set to be very talented. You don’t know how kids are going to perform when they get into live situations. As a freshman, it’s a bit of an unknown. But you can’t rush wildly at him. He can hurt you with his legs or arm.”

Francois is getting the opportunity to start as a result of Sean Maguire’s preseason injury. Maguire, who was 4-2 last season as FSU’s starting quarterback, broke a bone in his right foot on the second day of preseason practice on August 10. He is expected to be out four weeks, according to USA Today.