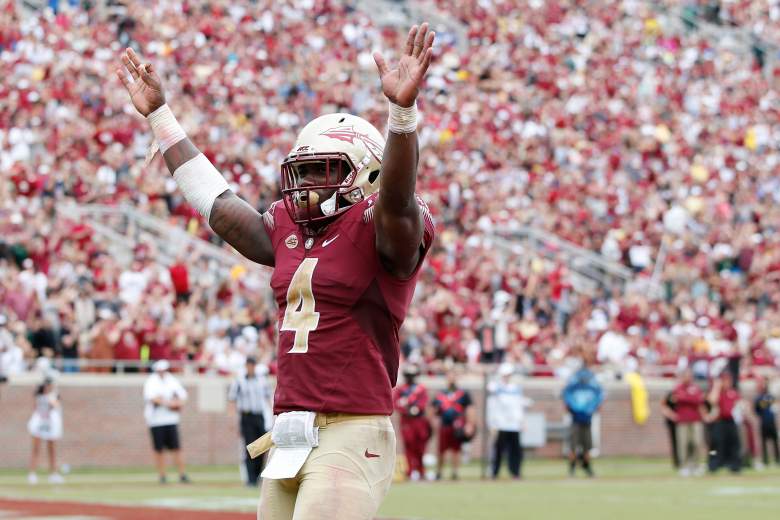 Dalvin Cook is one of the best playmakers in college football. (Getty)

Ole Miss takes on Florida State in the final day of college football’s five straight days of games to open up the season. There is just one game on the schedule for today, and it could be the best game of all. 4 Florida State takes on 11 Ole Miss in a neutral site opener in Orlando, Florida.

The game will kickoff at 8 p.m. Eastern on ESPN with Chris Fowler and Kirk Herbstreit on the call.

It is potentially the most interesting matchup of the weekend. Florida State quarterback Deondre Francois will get his first college football start in the city where he played high school football.

Chad Kelly is back at quarterback for Ole Miss. The Rebels will be happy to get back on the football field after an offseason filled with distractions. Kelly has a nice stable of receivers to throw to including Damore’ea Stringfellow.

Heisman candidate Dalvin Cook will fuel the Seminoles offense as Florida State looks to give Francois all the tools he needs to succeed early this season.

It is the final game in what has been an exciting opening to the season. The opening Saturday featured powerhouse games like LSU-Wisconsin, Oklahoma-Houston, Alabama-USC and Clemson-Auburn. Sunday gave fans an overtime thriller between Texas and Notre Dame.

Week 2 features a drop-off in marquee matchups, but does feature an intriguing game at Bristol Motor Speedway. On September 10, Tennessee will take on Virginia Tech in primetime in front of a capacity crowd at Bristol.

Read More
College Football, Football
Nothing says Labor Day quite like watching college football. Find out what games are on today and how you can check out the action on the field.