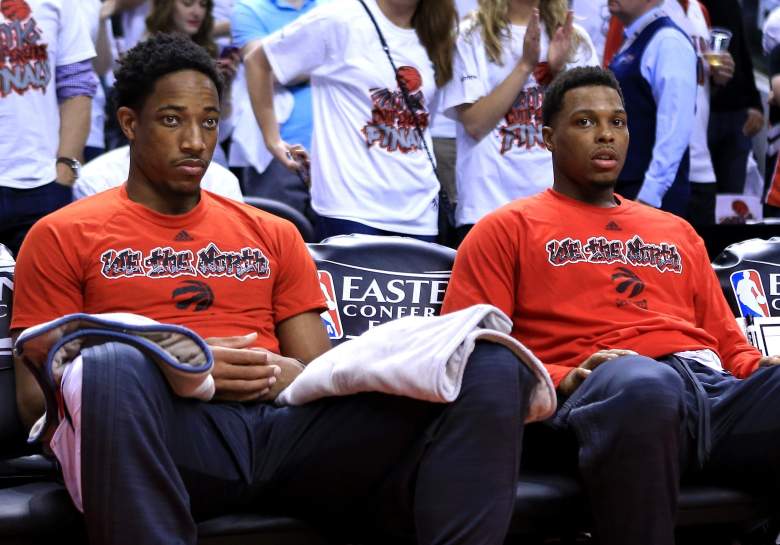 The 2015-16 season was a special one for the Toronto Raptors in many respects. Dwane Casey’s team reached the Eastern Conference finals for the first time in the franchise’s history, and in guards Kyle Lowry and DeMar DeRozan the Raptors had two All-Star Game participants. Add in the fact that Lowry and DeRozan won gold medals with USA Basketball in Rio, and it was a good year for the Raptors. The question now is what they do for an encore, with their eyes set on dethroning Cleveland but challengers such as Boston and Indiana looking to surpass the Raptors.

Toronto Raptors' Top 10 Plays of the 2015-2016 SeasonCheck out the Toronto Raptors' Top 10 plays of the 2015-16 NBA season! About the NBA: The NBA is the premier professional basketball league in the United States and Canada. The league is truly global, with games and programming in 215 countries and territories in 47 languages, as well as NBA rosters at the start…2016-09-02T21:00:01.000Z

G: Kyle Lowry (21.2 ppg, 4.7 rpg, 6.4 apg) After earning his first All-Star Game appearance in 2014-15 Lowry was even better last season, increasing his scoring average by more than three points from 17.8 and increasing his field goal and three-point percentages. Lowry’s offensive rating of 115 was the second-highest of his career, and he also accounted for a team-best 11.6 win shares.

G: DeMar DeRozan (23.5 ppg, 4.5 rpg, 4.0 apg) As was the case with Lowry, DeRozan improved his scoring average by more than three points (20.1 ppg in 2014-15). A career 28.3 percent shooter from beyond the arc, DeRozan shot 33.8 percent from distance in 2015-16. There may be occasional questions about shot selection when it comes to DeRozan, but he’s earned that right at this stage in his career. And it didn’t take long for him to sign a five-year contract extension worth $145 million this summer, either.

F: DeMarre Carroll (11.0 ppg, 4.7 rpg) Brought in as a free agent from Atlanta last summer, Carroll played in just 26 regular season games after suffering a right knee injury in early January. When healthy Carroll gives the Raptors a tough wing who defends his position well and can hit open shots on the other end of the floor. Now healthy, Carroll’s looking to be the high-level “three and D” guy the Raptors expected when they signed him.

F: Patrick Patterson (6.9 ppg, 4.3 rpg) For all the Raptors who made improvements in 2015-16, Patterson struggled in a reserve role last season. After shooting 44.9 percent from the field in 2014-15, Patterson’s percentage dropped to 41.4 percent last season. When on he’s a quality pick and pop option for Toronto, and the hope is that Patterson can regain the consistency he displayed in 2014-15. And with Jared Sullinger sidelined after undergoing foot surgery, Patterson becomes an even more important option in the front court.

C: Jonas Valanciunas (12.8 ppg, 9.1 rpg) While Bismack Biyombo, now a member of the Magic, performed admirably in the middle there’s no denying that Toronto missed the injured Valanciunas. The team’s best front court scorer, Valanciunas missed the remainder of the playoffs after suffering a sprained right ankle in Game 3 of the second round series against Miami. Valanciunas was healthy enough to play in the Olympics with Lithuania, and his return makes the Raptors a more balanced offensive team. 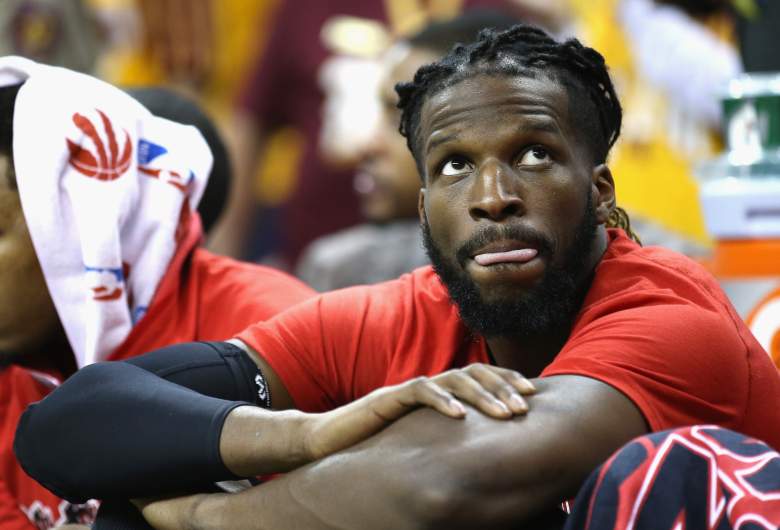 G: Cory Joseph (8.5 ppg, 2.6 rpg, 3.1 apg) In his first season playing with for the franchise he grew up watching Joseph was a productive backup point guard, shooting 43.9 percent from the field and doing a good job of getting the ball to teammates where they’re best positioned to be successful. That will once again be his job in 2016-17.

G: Norman Powell (5.6 ppg, 2.3 rpg) If there was a silver lining to the cloud that was Carroll’s injury, it was that Powell received more minutes. A second round pick out of UCLA, Powell earned his minutes by playing well defensively and taking advantages of whatever offensive opportunities came his way. He should once again be part of the Raptors’ perimeter rotation.

G: Delon Wright (3.8 ppg, 1.4 rpg, 1.1 apg) With Lowry playing 37 minutes a night and Joseph getting 25.6 minutes per game as his backup, there aren’t many minutes left for any other point guard on the roster. With that being the case Wright, a first round pick out of Utah last season, played in just 27 regular season games and spent time with the team’s D-League affiliate. That may be his fate once again in 2016-17.

F/G: Terrence Ross (9.9 ppg, 2.5 rpg) An athletic wing with a good perimeter stroke, Ross shot 43.1 percent from the field and 38.6 percent from three in a reserve role last season. He’s seemingly carved out a role for himself in the Raptors’ rotation, and he’s a key reserve for this team. This summer for Ross was all about putting himself in position to truly master his role in 2016-17.

C/F: Jared Sullinger (10.3 ppg, 8.3 rpg, 2.3 apg) After playing in just 45 games as a rookie with the Celtics in 2012-13, Sullinger was a much improved player over his next three seasons in Boston. This summer Toronto managed to land the former Ohio State big man, with the two sides agreeing to a one-year, $6 million deal. Sullinger’s back issues of the past weren’t a problem last season, as he played in 81 regular season games. Unfortunately for Sullinger and the Raptors he won’t have an impact early on, as foot surgery has sidelined him indefinitely.

C: Lucas Nogueira (2.2 ppg, 1.6 rpg) With the departure of Biyombo there’s room for another big to earn more playing time in 2016-17. Will Nogueira, who’s played a total of 35 regular season games in his first two NBA seasons. Nogueira also spent some time with the D-League affiliate in order to get some time in game action, but he and Bruno Caboclo enter this season in a spot where it would benefit the franchise if they made the strides needed to get on the court more often.

C: Jakob Poeltl (Rookie) The Pac-12 Player of the Year at Utah last season, the 7-foot tall center from Austria was Toronto’s first round selection in June. With a solid offensive skill set, Poeltl should also be in the mix for those minutes that became available when Biyombo signed with the Magic.

Other Players in Raptors Training Camp 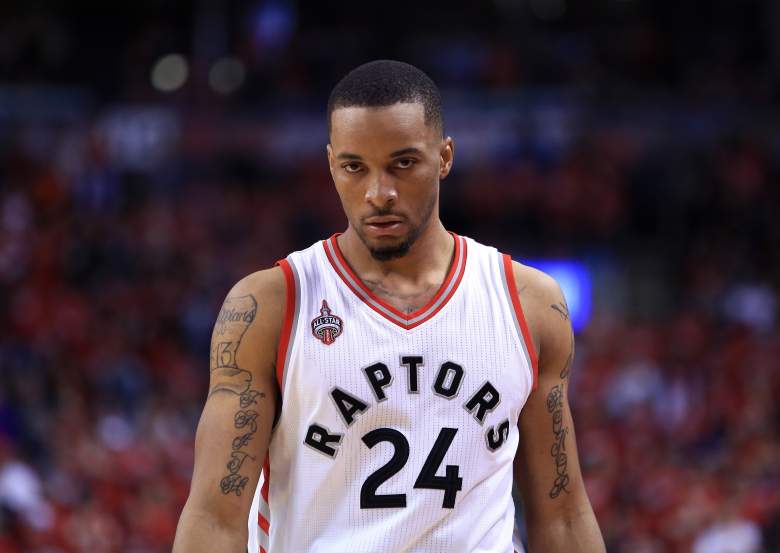 
Toronto has 14 players on guaranteed contracts in training camp, including forwards Caboclo and Siakam. Caboclo has played sparingly with the franchise in his two seasons in Toronto, seeing action in a total of 14 regular season games. As for Siakam, the New Mexico State product was a double-double machine in college who is highly active and a good defender as well. It would not be a surprise if he he was the big man to grab the available minutes on the back end of the rotation.

As for the other players in camp, some will help the Raptors fill out the roster of their D-League affiliate. VanVleet, who was an outstanding point guard at Wichita State, will have a tough fight to get onto the 15-man roster due to the point guards already on the roster. But it would not be wise to rule him out; he’s a tough competitor and a winner. Heslip is a high-level perimeter shooter who’s represented Canada in international competition and finished his college career at Baylor.

Crawford and Singler are both wings who do more than just score, and the same goes for a rookie in Uthoff who was one of the best players in the Big Ten as a senior at Iowa. Moreira, who finished his college career at SMU in 2015, played in both France and Spain last year.

Read More
Basketball NBA, NBA, Toronto Raptors
After reaching the Eastern Conference finals for the first time in franchise history, the Raptors are back for another run.