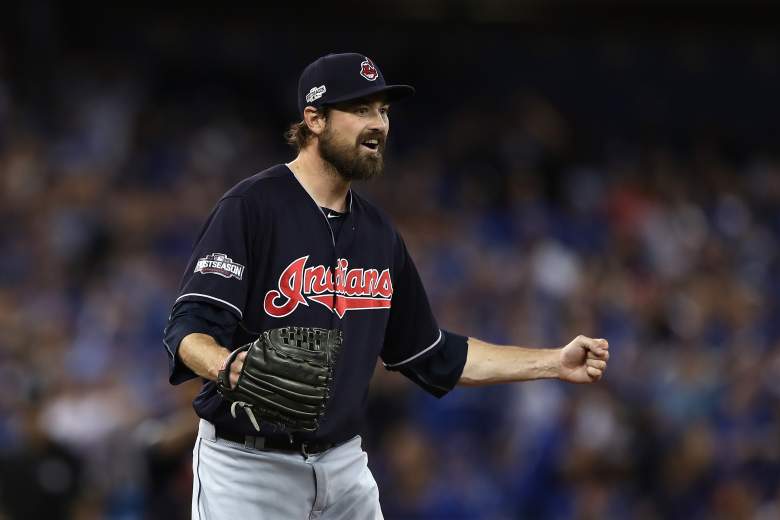 The Cleveland Indians are one win away from contending in the World Series. A victory on Tuesday would mark their first AL pennant since 1997.

The Indians are up 3-0 in the best-of-seven ALCS over the Toronto Blue Jays after last night’s 4-2 win.

Game 3 starter Trevor Bauer left the mound in the first inning because of uncontrollable bleeding from his right pinky. He was slated to start Game 2 of the ALCS, but was pushed back to Game 3 after injuring his pinky while repairing a drone.

The series continues today at Rogers Centre in Toronto. The Indians team will start ace righty Corey Kluber on short rest, while Aaron Sanchez will take the mound for the Jays.

Kluber won Game 1 of the ALCS and hasn’t given up a run in his two starts this postseason. The 2014 AL Cy Young Award winner has thrown 13 1/3 scoreless innings with 13 strikeouts. In the regular season, Kluber went 18-9 with 3.14 ERA.

Sanchez, who has an AL-leading 3.00 ERA, has not pitched since October 9.

Here’s how you can watch Game 4 on Tuesday:

Live Stream: Read on for a complete rundown of how to watch online or on other streaming devices:

If you have access to a cable or satellite log-in, you can watch a live stream on your desktop via TBS.com. You’ll need the log-in and password for a cable subscription — either yours or someone else’s — to access the stream.

The above stream is available on mobile and other streaming devices via the Watch TBS app, which is free to download in the following locations:

Users without cable can watch TBS via Sling TV, an online streaming service that provides access to select channels for a monthly fee. Here’s how to sign up for a free 7-day trial:

4) Select the channel package or packages you want. Both Sling Orange and Sling Blue include TBS

5) Enter your payment information. Sling Orange costs $20 per month, while Sling Blue costs $25 per month, but if you cancel your subscription within seven days of signing up, you will not be charged

If you have a Sling TV subscription (read above to learn how to start a free trial), you can watch the game on the Sling TV app, which is free to download in the following places:

If You’re in Canada & Have a Cable Log-In

Users in Canada can watch Sportsnet’s coverage of the game via Sportsnet Now.

If you already have a TV package that includes Sportsnet, you can watch the game right here for free by signing in with a username and password.

The above stream can be watched on mobile or other streaming devices via the Sportsnet app, which can downloaded for free in the following locations:

There are two different ways to watch without a cable subscription

1. You can watch Sportsnet’s coverage without cable via Sportsnet Now for a monthly fee of $24.99. If you just want to watch this game, you can sign up for a free seven-day trial.

2. Users in Canada can watch every playoff game live (there are no blackout restrictions outside of the United States) via MLB.TV. The service costs $24.99 for the entire postseason.

The Sportsnet broadcast can be watched on mobile or other streaming devices via the Sportsnet app, which can downloaded for free in the following locations:

MLB.TV subscribers can watch a live stream of the game on mobile or other streaming devices via the MLB At Bat app, which can be downloaded for free in the following locations: