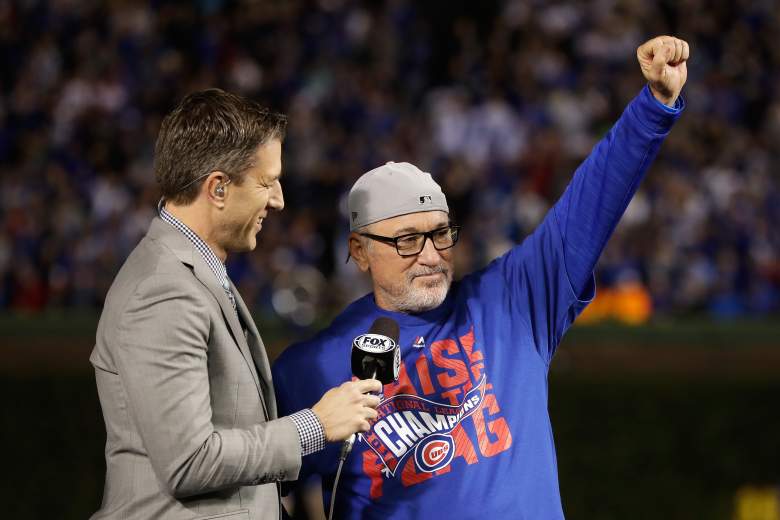 Joe Maddon will lead the Chicago Cubs, who haven’t won a title since 1908, into the World Series against the Cleveland Indians on Tuesday night. It will mark the Cubs first World Series appearance in 71 years.

Since becoming the manager for the Cubs in 2014, Maddon has exceeded expectations.

“There’s no way to measure it — Joe’s incredible,” Cubs owner Tom Ricketts said after they clinched the NL pennant. “He keeps the players loose but focused. He understands these guys. He’s their best friend and also their coach. He has a certain charisma that you just can’t replicate. To guide these guys through these very, very tense moments … the guy’s incredible.”

The 62-year-old manager is known for both on-field savvy and people skills, which include road trip themed outfits.

Maddon is among the highest-paid managers in baseball and has a net worth estimated at $12 million, according to Celebrity Net Worth.

Here’s a look at Maddon’s recent contract, past deals and other investments: 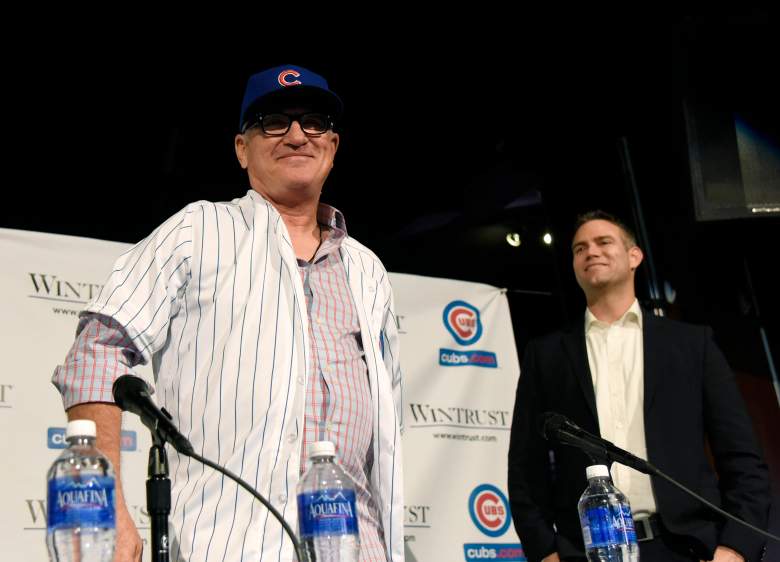 The Cubs dismissed Rick Renteria and introduced Maddon as their 54th manager in franchise history on November 3, 2014.

President of baseball operations Theo Epstein said in a statement that Maddon was “as well suited as anyone in the industry to manage the challenges that lie ahead of us.”

“We saw it as a unique opportunity and faced a clear dilemma: be loyal to Rick or be loyal to the organization,” Epstein said. “In this business of trying to win a world championship for the first time in 107 years, the organization has priority over any one individual. We decided to pursue Joe.”

Maddon’s Cubs deal was announced to be a 5-year deal, however salary figures were not disclosed.

2. Maddon’s Contract Is Expected to be Worth $25 Million 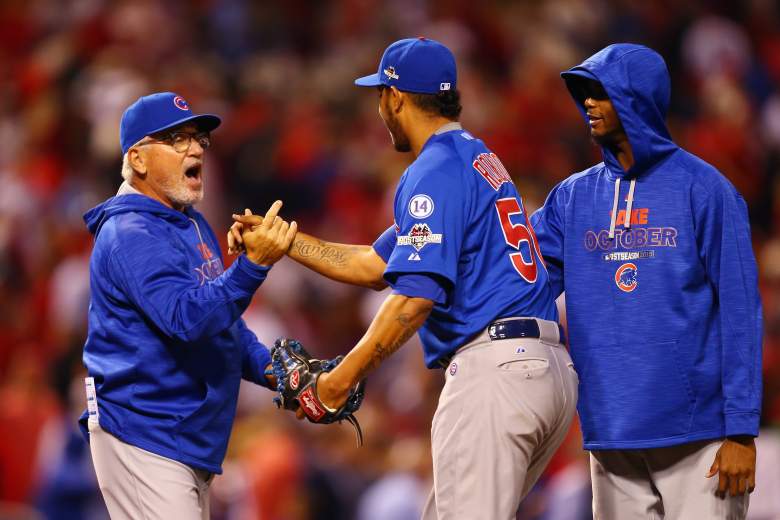 Maddon is believed to rank near the top of Major League Baseball’s managerial salary structure. A few comparable managers include Mike Scioscia who signed with the Angels through 2018 on a contract that tops out at $6 million annually, and Joe Girardi who the Yankees are paying $4 million per season through 2017.

According to ESPN, Maddon’s five-year deal is worth $25 million plus incentives tied to the postseason and does not include an opt-out clause.

3. Maddon Signed a $6 Million Contract Extension With the Rays in 2012 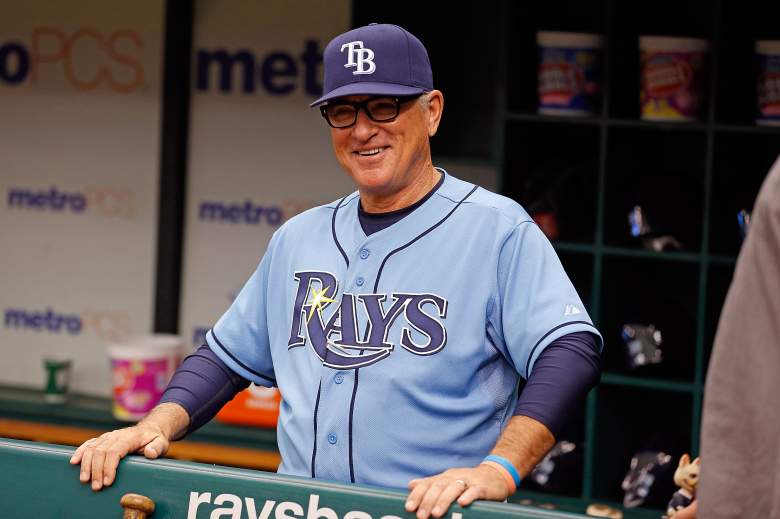 Maddon signed a three-year $6 million contract extension with the Rays in 2012. Maddon took over the Rays in 2006 — his first full-time managing gig — and won two American League manager of the year awards

The Rays went 781-729 under Maddon and qualified for the playoffs four times from 2008-2014 despite operating on low payrolls.

Maddon’s departure from Tampa Bay came after Rays owner Stu Sternberg said he “diligently and aggressively” pursued Maddon. According to CBS Sports, the Rays offered a significant raise from his approximate $1.8-million salary. However, the offer was still was well below market value for an elite manager. 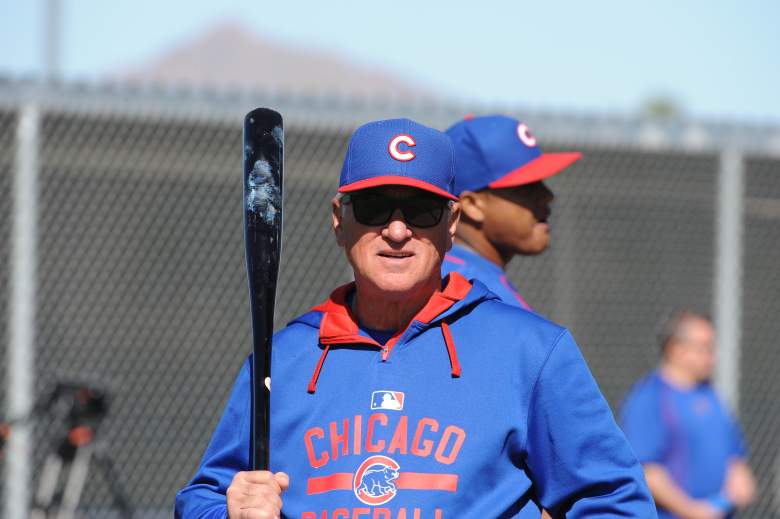 In 2012, Maddon purchased a home on Bayshore Boulevard in Tampa for $1.76 million, according to Zillow.

Maddon lives there with his wife, Jaye in the offseason. Jaye owns and operates a boxing fitness studio in South Tampa called Epic.

The studio features “spoxing,” a full-body workout that consists of spinning and boxing along with some floor work in between. The idea behind it all came when Jaye experienced a group boxing class in California.

“It was the most fun I had ever had in a group setting, and that was really the trigger,” Jaye said.

#THIS: Meet Joe MaddonMeet new Cubs manager Joe Maddon and see how he interacts with his ballclub – #THIS Check out m.mlb.com/video for our full archive of videos, and subscribe on YouTube for the best, exclusive MLB content: youtube.com/MLB About MLB.com: Commissioner Allan H. (Bud) Selig announced on January 19, 2000, that the 30 Major League club owners…2015-04-05T22:19:57.000Z

Maddon along with restaurateur Michael Stewart own a restaurant called Ava in South Tampa. Since opening in 2014, Ava has become known for their innovative, yet authentic Italian food, rustic ambiance and Neapolitan pizza done right. It could be the first of several locations to open across the region.

Maddon has always had an interest in the restaurant industry.

“Growing up, I worked at my uncle’s luncheonette in Hazleton Pennsylvania,” Maddon told The Tampa Tribune. “Mopping floors at lunchtime and after school, working the counter, making hoagies.”

Cayla Leutholt, general manager of Ava said Maddon was a hands-on owner in the first few months the restaurant was open before he left for spring training in Mesa, Arizona in February 2015.

“He would come in and if people were waiting for tables, he would bring glasses of wine to them or walk around and see how everyone’s food was and cheers with a glass of wine,” she told the Chicago Tribune. “He was always here, hands on, all the time, and he knows all the staff.”

The Italian-made Acunto oven takes center stage inside the 5,600-square-foot restaurant. Only 65 are produced each year in Naples and go for a price around $20,000.

Read More
Baseball, Chicago Cubs, MLB, Net Worth 5 Fast Facts, Sports
Chicago Cubs' Joe Maddon is among the highest-paid managers in baseball. Here's a look at this contract, past deals, and net worth.