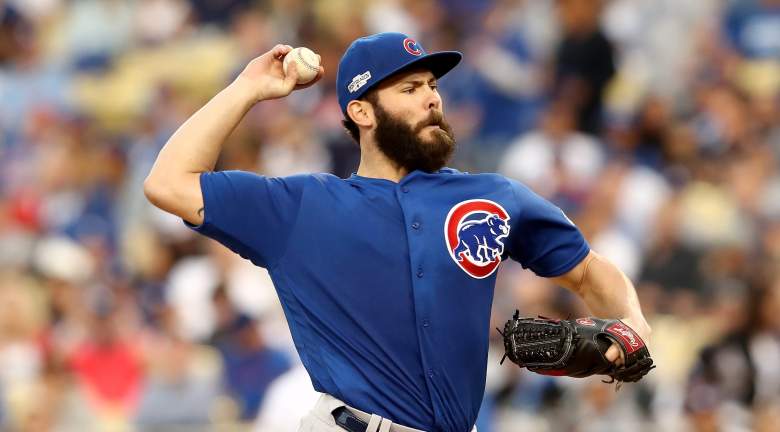 The starting pitchers for Game 7 of the National League Championship Series between the Los Angeles Dodgers and Chicago Cubs have been announced, should there be a need for a deciding games. The Cubs enter Game 6 with a three games to two lead, with the Dodgers starting Clayton Kershaw against Chicago’s Kyle Hendricks.

If a Game 7 is necessary, the Dodgers will call upon southpaw Rich Hill with Chicago countering with right-hander Jake Arrieta. First pitch at Wrigley Field is scheduled for 8:08 p.m. Eastern, and the game will be shown on FS1.

Hill has made three prior starts in the 2016 postseason, with his best outing coming in a 6-0 Dodger victory over the Cubs in Game 3 of the NLCS. Hill pitched six shutout innings (93 pitches, 60 strikes), giving up just two hits and striking out six batters while walking two. That was the second of two consecutive shutout victories for the Dodgers, with L.A. winning Game 2 by a 1-0 final score with Kershaw pitching seven innings for the win and closer Kenley Jansen the final two to earn the save.

Hill started Game 2 of the NLDS against the Nationals, pitching 4 1/3 innings and giving up six hits and four earned runs in a 5-2 loss. Hill also started Game 5 of that series, pitching 2 2/3 innings and allowing one run in a 4-3 Dodger victory. Hill did not factor into the decision, with Julio Urias being awarded the win after pitching two innings in relief.

As for Arrieta, he’s making his second start of this series as well. Arrieta was on the losing end of Hill’s Game 3 victory, giving up four earned runs in six innings with the Dodgers hitting two home runs. The Cubs have lost both of Arrieta’s starts this postseason, with the first defeat being a 6-5 loss in 13 innings to the Giants in Game 3 of the NLDS.

Arrieta pitched six innings in the defeat, allowing two earned runs and striking out five batters. He did not factor into the decision in that loss, with Mike Montgomery giving up the deciding run.