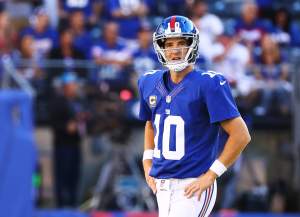 The Ravens and Giants will both be looking to shake off losing streaks Sunday, as they meet at MetLife for interconference action.

Here’s a complete look at all the betting info you need to know, as well as a prediction for the outcome:

Note: All odds and numbers courtesy of OddsShark.com and are updated as of October 16

Betting Percentages: 58 percent on Under 44.5

Are the Giants broken?

Newsday gives a pretty good rundown of what’s wrong with the Giants offense. Basically, the Giants don’t have a fullback or a blocking tight end. They run almost exclusively three-WR sets, putting the Giants offensive line at a big disadvantage. Defenses are parking two safeties deep to take away the big play, and the Giants, unable to throw short or withstand the pass rush to throw long, are losers of three straight games.

On defense, they currently sit last in the NFL with four sacks. The team that was built leading with the defensive line, with a coach specializing in blitzing and creating pressure, the team that signed a defensive lineman to a deal worth $85 million in the offseason can’t get to the quarterback.

All those things considered, the Giants could double their sack total for the season against Baltimore. The Ravens could be without their starting right guard and starting left tackle, as injuries begin to pile up for Baltimore early in the season.

Eli Manning has played three horrible games against the Ravens in his career, leading the team to a 1-2 record. He’s never passed for more than 154 yards against them, and the Giants enter Sunday 1-5 in their last six home games. It’s time to snap out of the funk.