"Good, now you can get off my back, assholes" – Steve Bartman pic.twitter.com/YirJfjwoi3

With the Chicago Cubs headed to the World Series, a lot of fans are wondering: Where is Steve Bartman now?

(And they were hoping he wasn’t at the game).

The Cubs broke the curse – and freed Bartman from the chains of public scorn – and are going to the World Series for the first time in 71 years. They won game 6 against the Los Angeles Dodgers 5-0. And no one tipped a ball.

How quickly a little victory can improve attitudes. Now some remorseful fans are even suggesting that the Cubs should let Bartman throw out the first pitch in the World Series. Or at least invite him. Or hug him. Or just stop picking on him. Or something. The hashtag #forgiveBartman was trending on Twitter as Chicago fans rejoiced.

On October 25, Cleveland Indians’ Jason Kipnis – who went to the same school as Bartman and grew up near him – told USA Today he thought Bartman should throw out the first ceremonial pitch, adding, “He didn’t deserve all of that. He’s a very loyal fan, who wanted a foul ball, and the way the events turned, made him into a scapegoat.”

I hope @Cubs invite Steve Bartman to every World Series game. This guy has carried weight of Chicago for years.

According to CNN, Bartman, who “tipped” away a foul ball from Cubs outfielder Moises Alou, was planning to watch the game but not attend.

Bartman remains in the Chicago area, he still gets threats, and he works for a financial firm, said CNN, which quoted Bartman’s spokesman, Frank Murtha, as saying Bartman just wants to return to a normal life, doesn’t want to throw out the first pitch, and declined offers to profit from his notoriety (other than for charity.) Murtha told CNN that Bartman is a “grounded, well centered person” who doesn’t need affirmation or seek forgiveness.

“Steve just wishes the Cubs well and has no interest in being any distraction from whatever happens to them,” said Bartman’s spokesman, to CNN.

The New York Times says Bartman has turned down more than 200 news media requests over the past years, for everything from Dr. Phil to The Today Show.

According to Sports Illustrated, Bartman, as of 2013, “was still living in Chicago and working for a financial services consulting firm.” He was still a Cubs fan, but was doing everything he could to be anonymous, even turning down “a six-figure deal to appear in a Super Bowl commercial” and a 2013 invite to Wrigley Field, said Sports Illustrated, adding that Bartman is 39 today.

Yahoo Sports said the guy who ended up sitting in Bartman’s seat for game 6 – Aisle 4, Row 8, Seat 113 – is named Bryan but wouldn’t provide his last name. Bryan found himself facing a phalanx of reporters, said Yahoo.

Of course, it was in the eighth inning of the 2003 NLCS – that Bartman found himself hurtling into infamy. The Cubs were only five outs away from “their first World Series appearance since 1945,” said Sports Illustrated, and they went on to lose that game.

Most remember it as "the Bartman Game." pic.twitter.com/bbr3rOFVt0

Over time, Bartman has seen something of a revival. “Did Steve Bartman lose Game 7 for the Cubs? No. The Chicago Cubs did that themselves,” said Cubbiesscrib.

It was known as the “Steve Bartman Incident.”

With victory in sight – at long last – Chicago Cubs fans decided now might be the time to forgive Bartman – once and for all.

Steve Bartman, wherever you are, enjoy the moment. It was never your fault. #Cubs

I'm not a Cubs fan, but I hope somewhere Steve Bartman is rejoicing. And comes out of hiding.

Congrats Cubs fans!
Best way to confuse the baseball gods and break the curse is to let Steve Bartman throw out the 1st pitch of game 1.

Steve Bartman is celebrating the Cubs World Series berth from a dungeon in Wrigleyville. 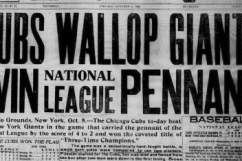 Last Time the Cubs Went to the World Series, These Things Didn’t Exist