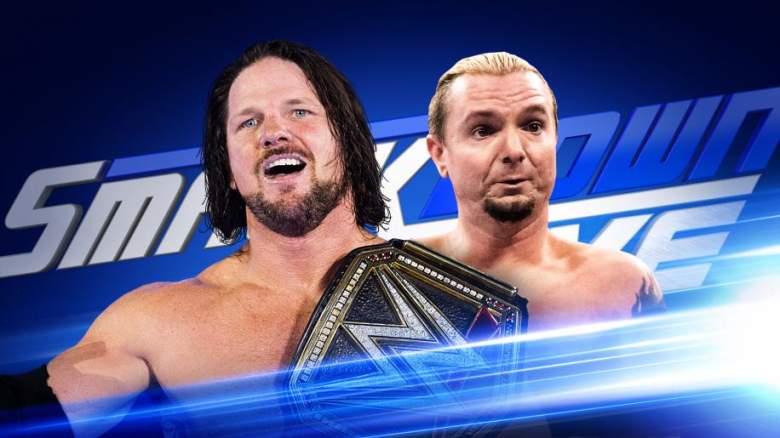 Tonight on SmackDown Live, everything’s coming up Ellsworth! In a strange turn of events, last week on SmackDown, James Ellsworth defeated AJ Styles, and tonight he has a title shot in the main event of the show. Plus, Alexa Bliss sets her sights on Naomi as she waits to take on Becky Lynch, and Randy Orton must overcome the Wyatt family. The show will be broadcast tonight at 8:00 p.m. Eastern Time on the USA Network. Read on for match results and spoilers, followed by a preview of the night’s events written earlier this afternoon.

8:00 – Backstage, Dean Ambrose presents James Ellsworth with his new t-shirt being sold on WWE.com. Ambrose says he has full confidence in Ellsworth.

8:04 – Randy Orton enters. He says he has to give credit where credit’s due: trying to escape Bray Wyatt’s world has been more difficult than he expected. He says he feels like he’s losing his mind. Now, he warns Wyatt that he’s coming for him.

The Wyatt family appears in a video in which Bray Wyatt is lying in a casket. He says that Orton doesn’t have to come after him, because Wyatt’s coming after Orton. He’s about to take Orton on a journey on which he will be gasping for his last breath of air.

8:08 – Luke Harper fights Randy Orton. In the middle of the match, Bray Wyatt enters, being carried out in a casket. He rolls the casket to the side of the ring, opening it up and mocking Orton. Not long after, Bray Wyatt runs into the ring and starts beating up Randy Orton, and so the match ends in disqualification. When Bray Wyatt opens up the casket again to put Orton inside, somehow Kane is in there now. Kane comes into the ring and helps Orton to take down Wyatt and Harper. The two are lying injured in the ring, but suddenly the lights go out and Wyatt and Harper disappear.

8:19 – In an interview back stage, AJ Styles says he can’t believe he really has to fight James Ellsworth tonight. He says that Dean Ambrose is almost certainly going to find a way to intervene and help Ellsworth win. If Ambrose causes AJ Styles to lose, he’ll find him and take him apart piece by piece.

8:27 – Alexa Bliss defeats Naomi. Naomi has the advantage for much of the match, but Bliss is able to score the victory after a jump off the top rope. Bliss is dressed in a Freddy Krueger inspired outfit this week.

8:48 – Apollo Crews is scheduled to fight Curt Hawkins. However, after Hawkins eggs Crews on and Crews hits him once, Hawkins gets mad and leaves before the match can even start.

8:56 – Carmella enters. She recalls SummerSlam, when Nikki Bella returned and everyone went nuts for her. She says she doesn’t get the Nikki Bella hype.

Right on cue, Nikki Bella enters. She asks Carmella to say what she has to say to her face. Carmella says that once again Nikki Bella is stealing her spotlight, just like she did at SummerSlam. But she can do whatever she wants since her boyfriend is John Cena. Bella says Carmella is just another jealous hater and a bull. Carmella calls Nikki a needy, whiny, clingy gold digger, as evidenced by Total Bellas.

Carmella goes on to play a montage of Total Bellas clips portraying Nikki as being extremely clingy in her relationship with John Cena. Nikki says that what Carmella doesn’t understand is that she has paved her own road and fights her own battles; she’s fearless, especially after she was told she may never get in the ring again due to her neck injury. Carmella tells Nicky she used her looks to get her foot in the door, and she used John Cena to become a celebrity.

9:24 – Backstage, Natalya makes the case to Daniel Bryan as to why she should be in the Survivor Series five-on-five women’s match.

9:30 – Jack Swagger fights Baron Corbin. Corbin is incredibly brutal on Swagger, at one point pinning his head against the top of the barricade and pounding on him over and over. Swagger stands practically no chance, and the match lasts only about a minute.

9:35 – Backstage, Dean Ambrose approaches Daniel Bryan, ready to serve as referee in tonight’s match. Bryan tells Dean that he can’t be referee tonight, but he can be timekeeper, ring announcer, or perhaps he can be on commentary. Ambrose decides he’ll do all three.

9:41 – James Ellsworth defeats AJ Styles by disqualification. Dean Ambrose serves as announcer and timekeeper. The instant Styles starts to go after Ellsworth, Ambrose stops the match, saying they have to take a commercial break. Ambrose also stops the match to randomly promote James Ellsworth’s t-shirt on the Titantron and to make an announcement about someone’s lights being on in the parking lot. When AJ Styles throws Ellsworth out of the ring, Ambrose throws him back in, and the two of them go back and forth like that throwing Ellsworth around several times. Ellsworth shocks the audience when he actually pulls Styles down off the top rope, gets a kick in, and very nearly pins Styles. A few minutes later, Styles is disqualified when he keeps striking Ellsworth in the corner after the five count. Ellsworth wins the match but does not take home the title.

On October 11th’s episode of SmackDown, viewers were shocked to see the fan-favorite jobber James Ellsworth make a return, actually getting to have a match with AJ Styles. Not only that, but Ellsworth actually won! Granted, that was just because Dean Ambrose was the referee and gave Ellsworth a whole lot of help. Later that night, Daniel Bryan announced that Ellsworth would be given a title opportunity on October 18th. Could Ellsworth, the goofy jobber who became an internet meme over the summer, actually become the next WWE World Champion?

In the women’s division, the WWE has placed Alexa Bliss in a feud with Naomi, seemingly just as a way to stall until Becky Lynch returns from injury at the beginning of November. Last week, Bliss claimed that she could defeat Naomi any place any time, and so Daniel Bryan decided to call her on that by scheduling a match for October 18th’s show. Bliss already lost to Naomi at No Mercy, but could she score a comeback tonight?

Plus, Luke Harper and Bray Wyatt have been dominating the Viper, last week somehow making Randy Orton’s partner, Kane, disappear at the conclusion of a match. What will Orton’s next step be in his plans to defeat two opponents who literally have magical powers? Finally, it seems that The Hype Bros and The Ascension both plan to go after the tag team titles, clearly not taking into consideration that Heath Slater’s got kids.

It all goes down tonight at 8:00 p.m. Eastern Time on the USA Network.