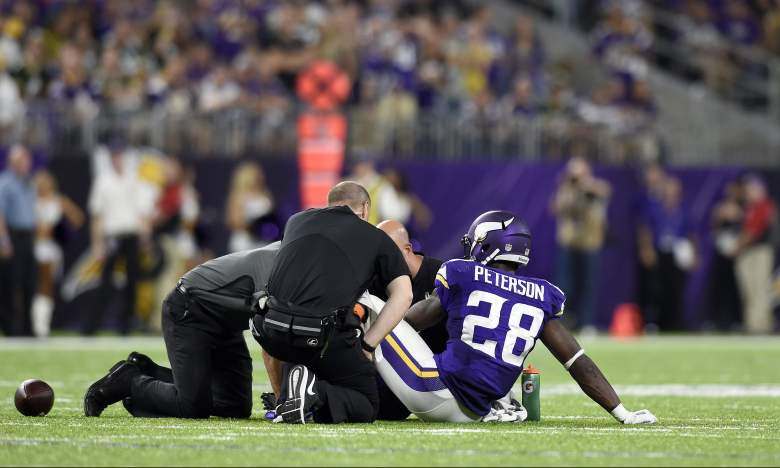 Adrian Peterson has been out with a knee injury since Week 2. (Getty)

The Minnesota Vikings might be getting a familiar face back in the lineup soon.

Adrian Peterson, who has been out since Week 2 with a torn meniscus, could return to the field later in December, according to NFL sources.

The 2012 NFL MVP has not practiced, but has picked up his running routine and is considered “ahead of schedule” from his September 18 injury. The 7-time Pro Bowler underwent surgery on September 22 to repair his right knee and was placed on injured reserve the next day.

Two games for No. 28’s potential return are being speculated — December 18 at home vs. the Colts or December 24 at Lambeau Field against the Packers, the team he was playing when injured in September.

Adrian Peterson could return from his knee injury on Dec. 18 vs Colts or Dec. 24 vs Packers. https://t.co/pIBR7N9O6j

To say the Vikings could use a boost in the running game would be an understatement. Minnesota is last in the league, averaging just 71.1 yards per game. The team’s 782 total yards is less than what the league’s top 8 rushers each have individually.

Jerick McKinnon leads Minnesota with 326 yards and Matt Asiata has 287, but they average just 3.0 and 3.2 per carry, respectively. Neither has had a 100-yard game.

Peterson, 31, is a 3-time league rushing leader, including last season, and a 5-time First Team All-Pro.