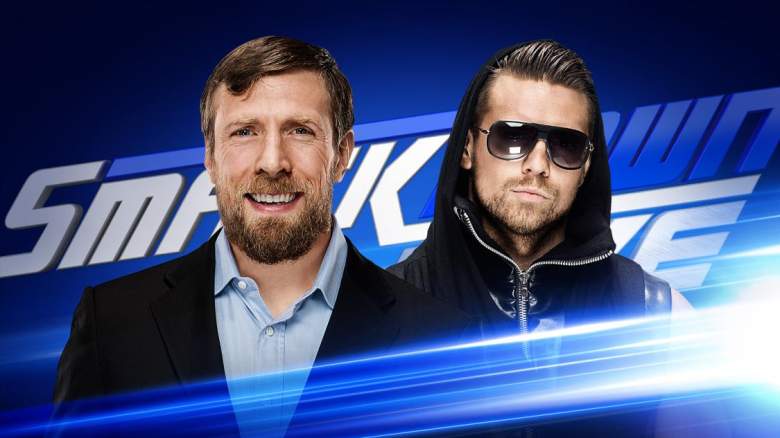 Tonight on SmackDown Live, General Manager Daniel Bryan will reveal which WWE superstars will represent Team Blue at Survivor Series. Plus, Dean Ambrose will react to James Ellsworth’s actions during last week’s episode, and Randy Orton may or may not have joined the Wyatt Family. SmackDown Live will air tonight at 8:00 p.m. Eastern Time on the USA Network. Read on for match results and spoilers, followed by a preview of the night’s events written earlier this afternoon.

8:00 – James Ellsworth enters. He thanks Shane McMahon and Daniel Bryan for letting him come out tonight and say goodbye. After his actions last week, he hasn’t been able to eat or sleep; he’s not going to be able to move on until he can tell Dean Ambrose that he’s truly sorry.

Dean Ambrose enters. He says he’s had a lot of time to think about this, and to think about ripping Ellsworth’s head off with his bare hands, but he can’t stay mad at James. Ellsworth doesn’t have to apologize, Ambrose says, but Ellsworth proceeds to offer a lengthy apology. Ambrose says it’s water under the bridge but he tells Ellsworth to never get in his way again.

AJ Styles enters, asking James Ellsworth why in the world he’s apologizing to Dean. He tells Ellsworth that Ambrose has been using him for weeks, and Ambrose doesn’t really respect him. Instead, Styles respects him much more than Ambrose does. If anything, Ellsworth owes Styles an apology, Styles says. Ambrose says that Ellsworth doesn’t take the easy way out like Styles does, and Ambrose and Styles immediately begin to fight, with Styles throwing Ellsworth out of the ring. With Ambrose lying injured in the ring, Styles leaves.

8:17 – Backstage, Daniel Bryan tries to calm down a fight between James Ellsworth and Dean Ambrose. Bryan says that Ambrose will get another shot at AJ Styles tonight; if he wins, he becomes the #1 contender. But this is his last chance no matter what.

8:20 – Randy Orton fights Kane. Not long into the match, Bray Wyatt and Luke Harper appear at ringside. They drag Kane out of the ring and begin fighting him. Thanks to their help, Orton is able to get an RKO in and defeat Kane.

8:43 – Daniel Bryan and Shane McMahon tell Naomi she will be the fifth member of SmackDown‘s women’s team at Survivor Series. Natayla wants to be involved, and so Bryan and McMahon decide to make her the women’s coach.

8:50 – American Alpha defeats The Spirit Squad, meaning they will be going to Survivor Series.

8:59 – Daniel Bryan joins The Miz for an episode of Miz TV. Bryan says that as far as the tag teams go, there will be two more qualifying matches to determine who else goes to Survivor Series. In terms of the men’s team, though, the superstars will be: Randy Orton, Baron Corbin, Bray Wyatt, Dean Ambrose and AJ Styles. The Miz is obviously very upset that he’s not on the team, and Bryan says he wasn’t selected because they need superstars who aren’t afraid to fight. Bryan points out that last week, The Miz turned down a rematch with Dolph Ziggler because it wasn’t on his terms. The Miz says that Daniel Bryan isn’t good at anything anymore except moping around John Cena’s house on Total Bellas. Bryan says that whatever The Miz is best at, it certainly isn’t wrestling. Bryan says that since The Miz turned down his rematch, Dolph Ziggler will have an open challenge title match…right now.

9:14 – Dolph Ziggler defeats Curt Hawkins in a title match. The match lasts literally five seconds, with Ziggler kicking Hawkins in the face and pinning him immediately.

9:18 – After the match, Dolph Ziggler challenges any superstar from Monday Night Raw to take his title from him.

9:19 – Backstage, James Ellsworth asks Dean Ambrose if there’s any way he can come out to ringside tonight. Ambrose says no.

9:26 – Backstage, Bray Wyatt says that some in the Wyatt Family have been skeptical about Randy Orton wanting to join. But Bray says that Orton is welcome. Orton says he was born with the devil whispering in his ear and he’s done trying to fight it; he also tells Bray that he is a god.

9:28 – The Usos defeat The Headbangers, meaning they will be going to Survivor Series.

9:31 – Backstage, AJ Styles says he’s going to beat Dean Ambrose again, but this time his little buddy James Ellsworth won’t be out there as an excuse.

9:32 – Backstage, Dean Ambrose escorts James Ellsworth out of the arena.

9:37 – Dean Ambrose defeats AJ Styles. Towards the end of the match, James Ellsworth appears at ringside, even though he was banned. He distracts Dean Ambrose and very nearly hands AJ Styles the victory because of that. Security runs out to grab Ellsworth and they pursue him through the crowd and into the back. Ellsworth runs back in a few minutes later, still being chased by security. AJ Styles pushes Ellsworth into the commentary table, and after Styles jumps back into the ring after that, Ambrose pins him and gets the victory.

The Survivor Series pay-per-view will air in just a few weeks, being broadcast on November 20th. For the first time since the 2016 brand split, superstars from Raw and SmackDown will go head-to-head, representing their show in an all out battle. We already know that Team Red’s male superstar team will consist of Kevin Owens, Chris Jericho, Roman Reigns and Braun Strowman, but no announcements have been made about who will represent Team Blue. Tonight, Daniel Bryan will appear on Miz TV to make that announcement. Could The Miz himself get a role in Survivor Series?

Plus, we also need to find out who will represent the women’s division on Team Blue. So far, we know that Raw‘s women’s team will be lead by Charlotte and it will include Bayley and Nia Jax, but for SmackDown, all we know is that Nikki Bella is the captain. Who else will join her? Presumably Becky Lynch and Alexa Bliss will join her, but what about Carmella? Naomi? Might Eva Marie make a return in time to help them out? Finally, Team Blue has to add more people to the tag team match, as there’s currently room for three more teams.

Also on SmackDown tonight, we’ll see the aftermath of James Ellsworth costing Dean Ambrose a title opportunity on last week’s episode. Ellsworth has expressed his most sincere apologies, but will that be enough for Ambrose? How will The Lunatic Fringe respond? We also need to check in on Randy Orton, who hinted that he’s joining The Wyatt Family last week when he said, “If you can’t beat ‘em, join ‘em.” What the heck is The Viper thinking? Does he plan to take down the group from the inside?

We’ll find out tonight when SmackDown Live airs at 8:00 p.m. on the USA Network.