Davis' opponent will be playing for the second consecutive night, and Boston had to expend more energy than many anticipated in holding off Philadelphia Friday night. And Davis was productive in the first meeting between the teams, accounting for 25 points, 16 rebounds, four blocks and two steals (and seven turnovers) in the Pelicans' one-point victory. It should be noted that neither Al Horford nor Jae Crowder played in that game, and both will be on the court Saturday night. But when you're averaging nearly 52 FanDuel points per game as Davis is, the opportunities to score won't be lacking. (Getty) 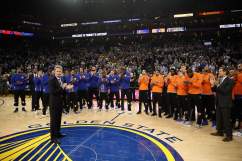