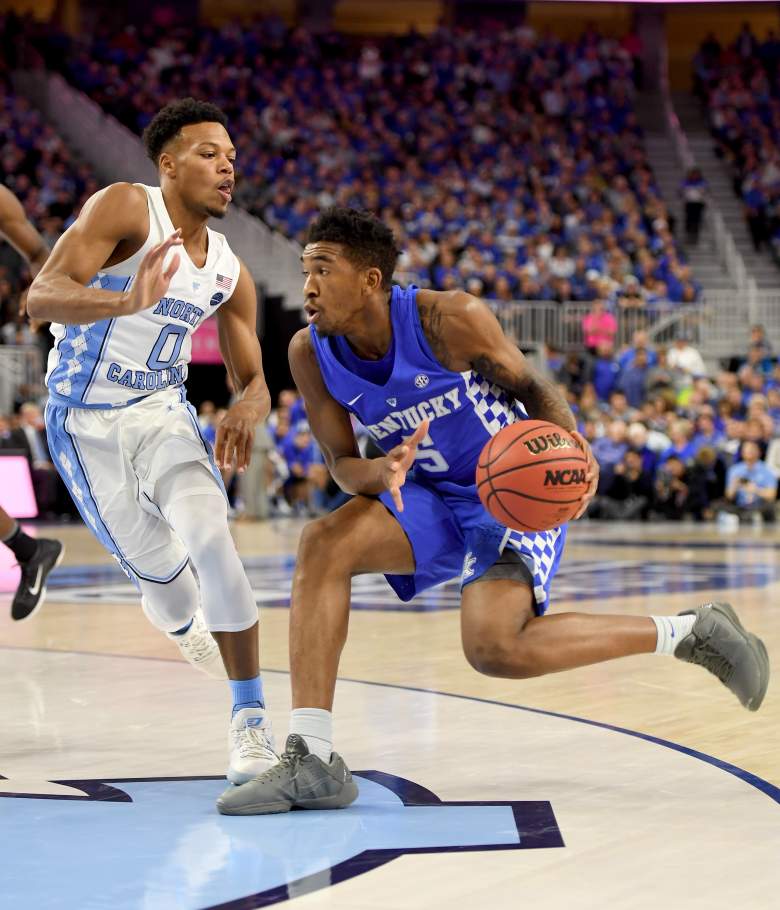 In the second game of the CBS Sports Classic in Las Vegas, No. 6 Kentucky and No. 7 North Carolina combined to produce…a classic. The Wildcats picked up the win by the final score of 103-100, with a Malik Monk three-pointer with 17 seconds remaining giving Kentucky the lead for good. Monk was sensational, scoring 47 points in what is a new school record for points in a game by a freshman. Monk shot 18-for-28 from the field and 8-for-12 from three, with he and fellow freshman De’Aaron Fox proving to be too much for the Tar Heels to handle. Fox added 24 points and ten assists with just two turnovers, and Isaiah Briscoe finished with ten points.

Malik Monk would like to place an order for ONIONS! https://t.co/ZIBubpcOkP

Justin Jackson led five Tar Heels in double figures with 34 points and Joel Berry II added 23 to go along with seven assists and five rebounds. Also finishing in double figures were Kennedy Meeks (12 points, seven rebounds), Luke Maye (11 points) and Isaiah Hicks (ten points). Below is a recap of the game at each four-minute segment, with some highlight clips as well. 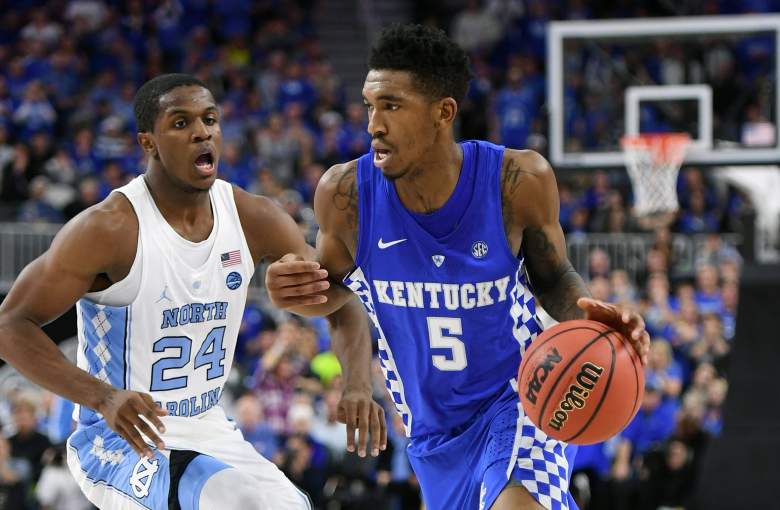 This one got off to the quick start that anticipated, and with both teams preferring to get up and down that’s no surprise at all. Malik Monk’s scored eight of Kentucky’s first ten points, shooting 3-for-5 from the field with two made three-pointers. Kennedy Meeks has six points to lead the way early on for the Tar Heels, and something to watch early is North Carolina’s rebounding numbers. A very good offensive rebounding team, the Tar Heels already have three offensive boards that have been converted into six second-chance points. Kentucky also has three offensive boards, but they don’t have any second chance points.

It’s been the “Malik Monk Show” in Las Vegas thus far, as the freshman’s now up to 15 points on 6-for-8 shooting from the field. Three other Wildcats have one field goal apiece in the half, with the rest of the starting lineup combining to shoot 2-for-8 from the field. North Carolina’s been more balanced offensively, with Joel Berry II having six points and Justin Jackson five to lead the way.

Kentucky further asserted itself during this stretch, with Monk and De’Aaron Fox getting out on the open floor and making plays around the basket. North Carolina is at its best when playing fast, but their inability to limit Kentucky’s open floor opportunities has resulted in the shift in momentum. Something else to watch: Isaiah Hicks has three fouls and Kennedy Meeks and Tony Bradley have two apiece for North Carolina, taking away what appeared to be an advantage (post experience/depth) for the Tar Heels entering the game.

SWEET JESUS!
Malik Monk with the lob to De'Aaron Fox for the jam. Yowza. #BBN pic.twitter.com/qcjIdayxNK

North Carolina, to this point, simply does not have an answer for Malik Monk. Monk’s now up to 24 points in the half, shooting 9-for-13 from the field. While a couple of his shots have been challenged, Monk’s been in rhythm and the attempts haven’t been forced. Fox is Kentucky’s other double-digit scorer, as he’s up to 11 points to go along with five assists. For North Carolina, Jackson’s got a team-best 14 points with Berry adding nine. The foul line has kept North Carolina in the game to this point, as they’re a plus-6 (11-5) in points from the charity stripe.

A highly entertaining first half, with Monk being the man of the hour. Monk, whose high in a game this season was 26, scored 27 points on 10-for-16 shooting from the field. He and Fox were the catalysts for Kentucky, with North Carolina even going zone (and to a smaller lineup) for a brief period to give the Wildcats a different look and attempt to keep the two freshman guards from getting to their preferred spots on the floor.

Kentucky’s 56 points are the most ever allowed in the first half by a Roy Williams-coached team. For North Carolina it was Jackson who stepped forward, scoring 20 points with Berry adding 13. North Carolina outscored Kentucky by seven from the foul line (14-7) and by five in second chance points (10-5), with those areas keeping them within striking distance. 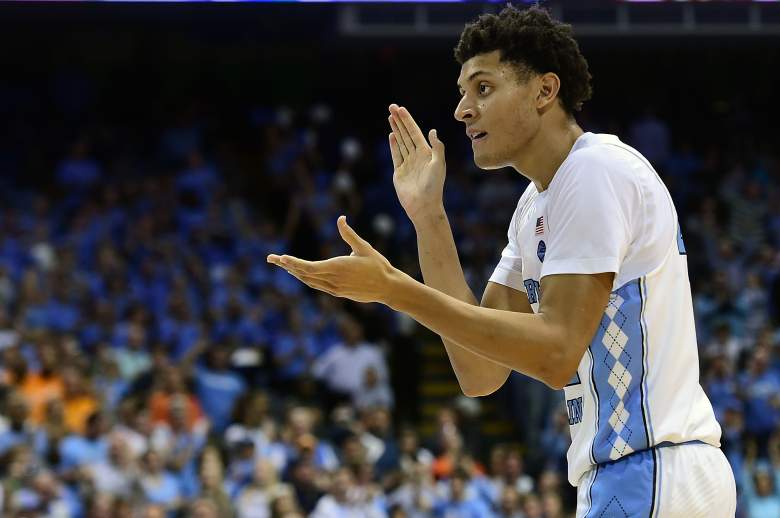 While Monk’s been comparatively quiet during the first segment of the second half, Jackson’s continued his scoring for North Carolina. Jackson’s now up to 25 points, shooting 7-for-13 from the field and 8-for-12 from the foul line. North Carolina’s still having some trouble with Kentucky’s dribble penetration, but the Wildcats have to be vigilant in their shot selection. Head coach John Calipari referred to some of the jumpers they made in the first half as “fool’s gold” during his halftime interview, with the hope for the second half being that they can get to the foul line more often in the second half.

North Carolina went back to the zone, and they’ve done a better job of keeping the Kentucky guards out of the paint as a result. Monk’s up to 32 points for Kentucky, but the change in defenses has been key as North Carolina has pulled to within two. Jackson’s scored 27 points and Berry 18 for the Tar Heels, who have played most of this game without Isaiah Hicks (four fouls).

North Carolina is to the point defensive where they’re going to the 2-3 zone on all made baskets. That’s how good Monk has been offensively. Monk’s up to 39 points, which is a Kentucky freshman record (Terrence Jones and Jamal Murray held the old mark of 35). Fox is one assist away from a double-double with 17 points and nine rebounds, and the Wildcats have done a better job of keeping North Carolina off the foul line. The Tar Heels have attempted just two free throws in the second half, making one. Jackson has been stuck on 27 points and Berry 18 for North Carolina, which has received some solid minutes from sophomore forward Luke Maye in the second stanza.

North Carolina lost one of its starters with just under five minutes remaining, as forward Kennedy Meeks fouled out on a double foul. Also in foul trouble for the Heels are Hicks and Berry, with both having four fouls. Also having fouled out of the game is Kentucky’s Bam Adebayo. Offensively, Monk’s up to 41 points on the night and Fox has 22 points, nine assists and just one turnover. Jackson continues to lead the way offensively for UNC with 29 points, and Berry is up to 21 points and six assists. 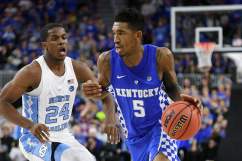