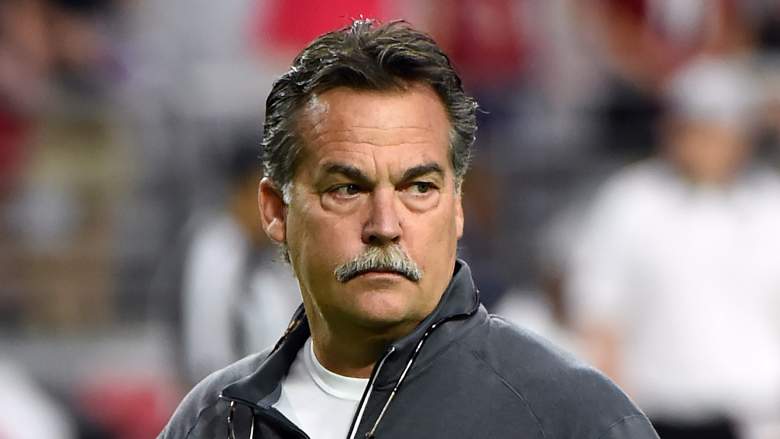 The Los Angeles Rams announced on Monday that Jeff Fisher has been fired after another anemic offensive performance. In their first season in Los Angeles since 1994, the team has managed just a 4-9 record and were trounced by the Atlanta Falcons on Sunday, 42-14.

Before the Rams made it official, ESPN’s Chris Mortensen tweeted that Fisher was fired.

The Rams also confirmed that special teams coach John Fassel will be the interim head coach for the rest of the season. Fassel has been with the team since 2012 and also worked as an assistant for the Ravens and Raiders.

“Making a decision such as this – especially during the season – is one of the most difficult in sports,” Rams Owner/Chairman E. Stanley Kroenke said in a statement. “I have great respect for Jeff as a coach, person, father and friend.”

He has worked tirelessly despite some challenging circumstances. He played an integral role in helping this team make history in returning the NFL to Los Angeles, and we always will be grateful for his commitment and dedication to our organization.

However, this is the right time to make a change as our performance has not lived up to my or our fans’ expectations. We all are focused on improving as an organization and building a team that makes Los Angeles proud. Our mission is to celebrate a Super Bowl title with our fans in Los Angeles. Today is the first step to bringing us closer to that goal.

Fisher was hired by the Rams organization in 2012 and had a 31-45-1 record during that time, never reaching the playoffs. In fact, since he was hired as a coach by the Houston Oilers/Tennessee Titans franchise in 1994, he has a 339-173 coaching record. He hasn’t had a winning season since 2008 and never had one with the Rams. The only time he coached a team to the Super Bowl was in 1999, when the Titans lost to the Rams.

The Rams’ biggest struggles this season have been on offense. Even in two of their four wins, they scored just nine points in each. The most points they scored in a game was back in week three, when they beat the Buccaneers 37-32.