Week 14 marks the beginning of the fantasy football playoffs in most leagues, and with all 32 teams in play for the first time in more than two months, owners are going to have a lot of difficult decisions on their hands. For the last couple of weeks, running back has been the position where you start your best players and don't think twice about it, while quarterback and wide receiver have offered a little more freedom to play the matchups. In Week 13, for example, Joe Flacco, Carson Palmer and Andy Dalton each out-scored (Yahoo standard scoring) Ben Roethlisberger, Tom Brady and Drew Brees. At WR, Tyler Lockett, Albert Wilson and Brandon LaFell all finished in the Top 5 at the position, while Mike Evans was outside the Top 50. Lineup choices at those two particular positions are going to be critical down the stretch, and with that in mind, you can click through the gallery for a closer look at my favorite sleeper starts and potential busts for Week 14. (Getty) 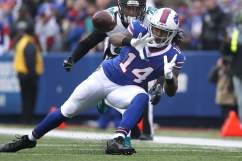