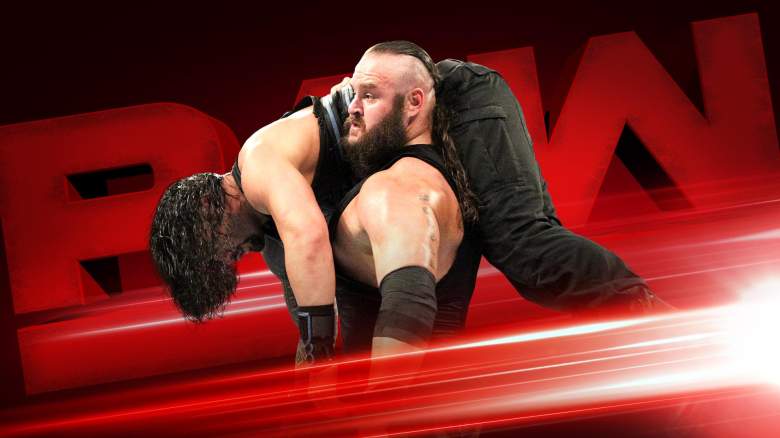 Tonight on Raw, Braun Strowman’s attack at the conclusion of last week’s show will be addressed by the show’s general manager, Mick Foley. Plus, with the Sasha Banks vs. Charlotte feud officially over, Bayley has her eyes on the Raw Women’s Championship. Can she be the one to take Charlotte down? The show will air tonight at 8:00 p.m. Eastern Time on the USA Network. Read on for results and spoilers, followed by a preview of the night’s events written earlier today.

8:00 – Stephanie McMahon enters. She says that Mick Foley has the night off. The crowd interrupts her with a “CM Punk!” chant and McMahon offers a brutal response, saying that their chant will probably last longer than Punk did during his UFC fight.

Seth Rollins enters. Rollins asks if Stephanie McMahon got Triple H everything he wanted for Christmas, saying that what Triple H really needs is his manhood back. McMahon reminds Rollins that Triple H is the COO of WWE. Rollins dares Triple H to come out into the ring instead of having his wife speak for him. McMahon says that Triple H is more of a champion than Rollins will ever be. Rollins says that he knows Triple H isn’t here, but he came to Chicago for a fight, and so he asks McMahon for a match against Braun Strowman.

Roman Reigns enters, and the crowd erupts in boos and a chant of “please don’t talk!” Reigns says that he wants to fight Braun Strowman as well, but Rollins tells Reigns to get in the back of the line. More “CM Punk!” chants drown out an argument between Rollins and Reigns about who gets to fight Strowman. Eventually, they seem to agree that they’ll team up to take down Strowman, their common enemy, just like in the Shield days.

McMahon points out that Dean Ambrose might be in the area, considering SmackDown Live films in Chicago tomorrow night. Maybe it’s time for the gang to get back together? The crowd chants “Yes! Yes! Yes!” That’s too bad, McMahon says, because that’s not going to happen. But McMahon does grant Rollins a match against Braun Strowman tonight. She also tells Roman Reigns that he’ll defend his US title tonight against a superstar of McMahon’s choosing. She does not reveal who it will be.

8:20 – Cesaro and Sheamus defeat The New Day in a rematch and retain their Raw Tag Team Championship.

8:39 – Braun Strowman walks around backstage, which causes people to run away in fear. He encounters Chris Jericho and Kevin Owens. They praise him for taking down Roman Reigns and Seth Rollins last week. Owens tells Strowman that he’ll be next in line for a Universal Championship match after Owens retains at Royal Rumble. Jericho tries to get Strowman going by making up things that Rollins said about Strowman behind his back (Jericho claims Rollins called Strowman a “stupid idiot” using those exact words.)

8:42 – Bayley interrupts a conversation between Goldust and R. Truth about who played the best Scrooge (Goldust insists that it was Bill Murray.) She presents Goldust with a Christmas gift: a teddy bear to honor Goldust’s father, Dusty Rhodes. Bayley leaves, and Luke Gallows and Karl Anderson enter. They immediately tear the head off of Goldust’s teddy bear.

8:50 – Nia Jax defeats a local jobber. Before the match, the jobber says in an interview that she wishes the woman who inspired her to become a wrestler, Sasha Banks, were here tonight. Jax easily defeats the jobber and, after the match, tells her to get a better role model.

8:58 – Backstage, Stephanie McMahon makes some sort of mysterious deal with Charlotte; we come back from commercial on a shot of them shaking hands. Kevin Owens and Chris Jericho enter, complaining that Roman Reigns is getting a title shot at Royal Rumble and that Jericho has to be in a shark cage during that match even though he’s afraid of heights. McMahon responds by giving Kevin Owens a match against Roman Reigns tonight, where the United States Championship will be on the line.

9:01 – Bayley enters. She talks about how she has defeated Charlotte three times now. Charlotte enters and says that no, Bayley did not beat her last week; the end of the match is played back, with it being pointed out that Charlotte’s shoulder was up before the three count. Charlotte says that she and her lawyers talked to Stephanie McMahon last night and agreed that Bayley’s victory will be expunged from the record books.

9:13 – Charlotte defeats Bayley, with Dana Brooke serving as special guest referee. Brooke obviously does not act as a neutral third party, and not long into the match, Bayley attacks Dana Brooke and throws her out of the ring. Brooke is quickly replaced with a real referee. At the end of the match, though, Brooke comes back in as the referee and makes the final count.

9:17 – Backstage, Stephanie McMahon interrupts Braun Strowman, who is in the middle of strangling some guy who wouldn’t tell him where Sami Zayn is. Strowman says he wants both Seth Rollins and Sami Zayn, but McMahon says that she can’t find Zayn. However, she can guarantee that Strowman will face Zayn on next week’s Raw. Strowman says that he wants Sami Zayn in a Last Man Standing match, and McMahon agrees.

9:25 – Neville defeats TJ Perkins. In a post-match interview, Neville insults the audience and assures them that he will win the Cruiserweight Championship tomorrow night on 205 Live.

9:41 – Enzo Amore and Big Cass enter. Big Cass is rolling out Enzo Amore in a wheelchair. Amore says that sensitivity class isn’t his speed because he’s already certified…a certified G. Rusev and Jinder Mahal have no backbone, he says. Big Cass calls out Rusev, saying that he is a coward for cornering Enzo Amore last week. Big Cass dares Rusev to corner him, adding that anyone who has a problem with Enzo has a problem with him.

Rusev and Jinder Mahal enter. The four men begin to fight, with Big Cass eventually picking Enzo Amore up out of the wheelchair and throwing him into Jinder Mahal. Big Cass also takes down Rusev, and Rusev flees backstage.

9:52 – A match pitting Bo Dallas and Darren Young against The Shining Stars is interrupted after less than 30 seconds by Braun Strowman, who enters and completely destroys all four superstars.

10:00 – Braun Strowman fights Seth Rollins. The match is derailed, however, when Sami Zayn’s theme song begins to play. Strowman waits for Zayn to walk down the ramp, but instead, Zayn attacks him from behind. Strowman chases Zayn through the audience and eventually backstage. Meanwhile, Chris Jericho also enters and attacks Seth Rollins, who has been in the ring all this time.

10:28 – Rich Swann easily defeats Ariya Daivari in a very brief match. In a post-match interview, Swann says that while Neville claims to be the king of the cruiserweights, it seems that he’s just a royal sourpuss. Still, Neville is one of the best athletes in the WWE, Swann says, and so he accepts Neville’s challenge to a fight. Suddenly, Neville attacks Rich Swann from behind. He then drags Swann into the ring so he can continue the assault, jumping off the top rope onto Swann.

10:37 – Backstage, Ariya Daivari blames his loss on Jack Gallagher, who he calls a scoundrel. Gallagher, having had his integrity questioned, challenges Daivari to a duel, comparing himself to Aaron Burr and proceeding to slap Daivari across the face.

After the match, Seth Rollins and Roman Reigns join forces and continue beating up Kevin Owens and Chris Jericho. They stand victorious in the ring as the show closes.

On December 19th’s episode of Raw, after Mick Foley would not let Sami Zayn perform, Braun Strowman was so hungry for a match that he went after several members of the roster, including Roman Reigns and Seth Rollins. Will Foley actually punish Strowman in any way? Also, will Foley continue to be so protective of Zayn and refuse to let him get in the ring with Strowman again?

In the women’s division, Charlotte’s feud with Sasha Banks finally ended this month, and so some major changes are occurring. Charlotte herself just began a new feud with Bayley; despite Bayley’s childlike persona, she’s quite skilled in the ring and has defeated Charlotte several times since making her debut in August. One of those victories occurred last week, giving Bayley the upper hand even though this was a non-title match. How will Charlotte retaliate? Also, Sasha Banks is moving on to a feud with Nia Jax, and the debut of Emmallina has still not happened after months of teasers.

Meanwhile, Enzo Amore is continuing to be assaulted at random by Rusev, who is angry about that time a month ago when Amore walked around naked backstage and allowed himself to be seen by Rusev’s wife, Lana. Amore went to sensitivity training and everything, but he was still brutalized by Rusev towards the end of December 19th’s show, and this time Rusev had a partner: Jinder Mahal, who Amore had angered during sensitivity training that night.

Finally, the 2017 Royal Rumble is now about a month away, and so that pay-per-view’s card will continue to be fleshed out over the next several weeks.