The top-ranked player in the world Andy Murray has been eliminated from the 2017 Australian Open in shocking fashion.

The No. 1-seeded Murray, of Great Britain, lost to Mischa Zverev of Germany 5-7, 7-5 2-6, 4-6 on January 22 to send him packing. Murray had previously been to four Australian Open Finals, with the most recent being in 2015, but has never won the tournament. It’s the earliest Murray has lost in the tournament since 2009.

In the shocking defeat, Murray dropped his serve eight times. Murray started the match well, leading the first set 4-1, but Zverev emerged from the deficit and didn’t let up, moving on to play the winner of the Round of 16 match between Rodger Federer of Switzerland and Kei Nishikori of Japan.

In his post-match interview, Murray remained humble and congratulated Zverev for coming out to play in the match. However, he was obviously upset from the early exit to the tournament.

#Murray: "I've had tough losses in my career in the past. I've come back from them…I'm sure I'll come back okay from it."#AusOpen pic.twitter.com/iKS768ex79

#Murray: "Right now I'm more disappointed for myself. It's the earliest I've lost here for, I don't know, a long time."#AusOpen pic.twitter.com/4jptK5jEF5 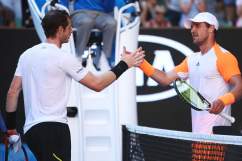