FIRST LOOK: GE logo on Celtics uniform, which will begin for all games next season. pic.twitter.com/N3RV53ceU0

The Boston Celtics have become the third National Basketball Association franchise to sell advertising space on its player jerseys.

The ad, which is part of the NBA’s three-year pilot program exploring how well teams can negotiate these deals and how fans react to the ads, will be seen on Boston jerseys beginning in the 2017-18 season according to Jimmy Golen of the Associated Press.

The Celtics join the Sacramento Kings, who have a deal with Blue Diamond almonds, and the Philadephia 76ers, who became the first NBA team when they brokered their deal with Stubhub, are the other two NBA franchises who are currently part of the pilot program.

The value of the deal has not been disclosed, but there has been some interest in that figure from other team executives. General Electric, who recently moved its headquarters to an abandoned candy factory in Boston, has gotten more than just the jersey ad for its money. GE will be featured in the team’s digital and social media content, and GE is now the official analytics and data partner of the Celtics.

Here's some more detail on the Celtics jerseys. Wyc Grousbeck said six other owners asked how much GE paid for it @sportslogosnet @uniwatch pic.twitter.com/RU75Rbrn8A

Nike Celtics jerseys sold nationally next year will not have GE patches on them. Team has option of having patch jerseys to sell in arena.

As the league studies the impact of the jersey ads, it can only hope that fans will have a similar reaction as Boston guard Terry Rozier, who said that, “I like free money. Actually I wouldn’t say it’s free money because we’re out there wearing jerseys and representing, but I guess that’s dope.” 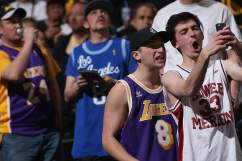