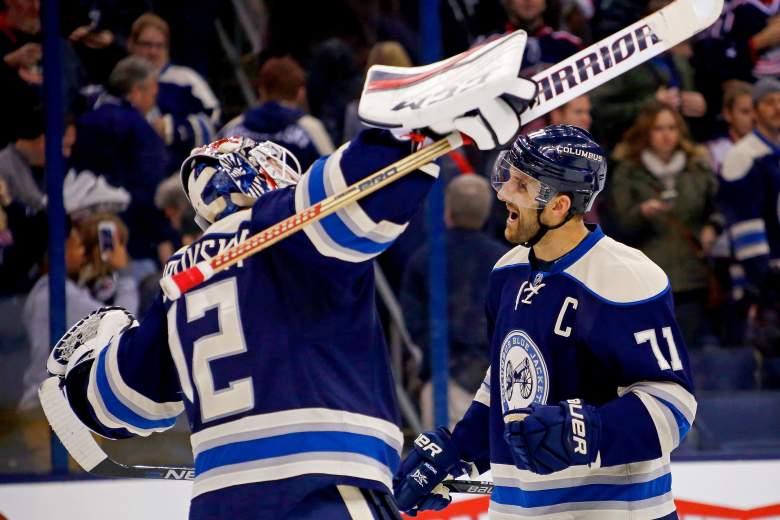 Sergei Bobrovsky and Nick Foligno congratulate each other. (Getty)

The 2015-16 NHL season, which resulted in the Columbus Blue Jackets amassing a mere 76 points and finishing in eighth place in the Metropolitan Division, feels like it belongs in a parallel universe right now.

The win was the 16th in a row for Columbus, which will look to tie the mark of 17 straight wins set by the Pittsburgh Penguins in 1993.

Going back through a string of 16 consecutive wins would be fun for any fan base, but should be even sweeter for fans of a franchise that has made the playoffs only twice in its 16 seasons and never advanced to the conference semifinals.

The last time the Blue Jackets ended up on the short end of a score was November 26 in Sunrise, Florida against the Florida Panthers. Florida was able to outlast a Blue Jackets team that had played five games in seven days, including back-to-back games twice in that span, by a score of 2-1 in shootouts.

The Blue Jackets had a couple of days off before returning home to face the Tampa Bay Lightning, and whatever they did during those two days should be repeated. That’s when everything changed.

The Blue Jackets hung another five spot on the Lightning, having done the same thing just four days prior in Tampa Bay. Sergie Bobrovsky occupied the net and made 26 saves to make the scoring frenzy stand up, and Columbus was off and running toward a streak that none of them likely had any inkling of at the time.

Late-game heroics, and a critical review, enabled Columbus to turn a win into a winning streak in Denver. Boone Jenner gave the Blue Jackets the lead at 8:57 of the third period, and while it originally looked like Colorado tied the game again with just 2:09 left to play in the third, the goal was nullified and Columbus held on for its second consecutive win.

Coyotes goalie Mike Smith set a single-game franchise record with 58 saves against Columbus, but it proved to not be enough. Alexander Wennberg tied the game with just 2:16 left in the third period, then Cam Atkinson and Sam Gagner scored in shootouts to give the Blue Jackets their third win in a row.

Columbus faced the Coyotes for the second time in three days, this time on home ice, and had a much easier time finding the back of the net. Gagner picked up where he had left off, scoring twice in the contest to help the Blue Jackets push the streak to four wins in a row.

Sedlak decided he liked scoring goals, and became part of a third-period offensive explosion for Columbus at home against the New York Islanders. The game was tied at two goals a piece entering the period, when Sedlak, Josh Anderson, Brandon Saad and Seth Jones all found the back of the net within a 12:04 span.

Bobrovsky out-did himself again, making 33 saves for Columbus as they headed north of the border for the first time during this streak. In the blue zone, Gagner again stood out with a goal and an assist to help the Blue Jackets push the streak to seven wins.

The offensive assault was balanced for Columbus again, as the four goals came from four different skaters, but it was the defensemen that shined brightest for the Blue Jackets as their Canadian road trip continued against the Flames. Bobrovsky only had to make 22 stops to hold Calgary to a mere goal, and Columbus came within one win of tying the franchise mark for consecutive wins.

Head coach John Tortorella was gifted with his 500th coaching victory as Columbus tied its franchise mark for consecutive wins. Jones scored just 43 seconds into overtime and gifted the puck to Tortorella, who became the first United States-born coach to reach 500 victories in NHL history.

The franchise record for consecutive wins fell largely thanks to goalie Curtis McElhinney, who tallied 44 saves on the night for Columbus. It was the fourth time in a row that games started by McElhinney had gone beyond regulation, but McElhinney proved up to the task as the winning streak reached double digits.

Scott Hartnell treated the home crowd to a show, netting a hat trick as Columbus registered its highest goal total of the streak to this point. This win, which put the Blue Jackets in a tie with the Chicago Blackhawks for the most points in the NHL, came as a result of seven unanswered Columbus goals.

It seemed as though Columbus had used up all of its goals the night before, but thanks to Bobrovsky’s 36 saves, it didn’t matter. The Blue Jackets broke the franchise record for longest point streak (13-0-1), and took over sole possession of first place in the NHL point standings as they entered the holiday break with a win streak of a dozen games.

Columbus’ formula for success has been well-rehearsed at this point. Once again, Bobrovsksy was stellar with 37 saves and the skaters, namely Nick Foligno in this game, provided the late theatrics with a power-play goal just over halfway through the third period to push the winning streak up to a baker’s dozen.

It became a full month since the winning streak began on this night, and Wenneberg scored twice to help Columbus tie the third-longest winning streak in NHL history. Prior to this, it had been six seasons since an NHL team (Washington Capitals) had won 14 games in a row, and the first time that had been done was 70 years prior to that (Boston Bruins).

Columbus faced a Wild team that came in on a 12-game winning streak of its own, and Elias said that this affair was the first time in the history of North American professional sports that two teams on winning streaks of at least 12 games faced each other. The result was the Blue Jackets pushing their winning streak to 15 games, tying the second-longest streak in NHL history.

Facing the Oilers for the second time during this streak proved to be a plus for Columbus, as the Blue Jackets got another win. Three different Blue Jackets scored goals and Bobrovsky made 21 saves to put Columbus on the brink of history.

Columbus will now go for the win that will tie the record on Thursday, January 5 at Washington. The puck is set to drop at 7 p.m. ET. If the Blue Jackets should get win No. 17 that night, they will go for the record-setting win on Saturday, January 7 at home against the New York Rangers. Puck-drop for that game is also 7 p.m. ET.