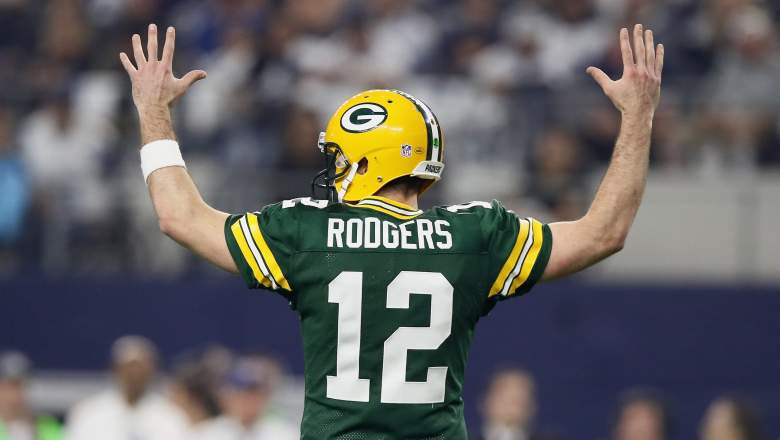 When you think of the best NFL quarterbacks, Aaron Rodgers almost certainly has to pop into your mind.

The Green Bay Packers signal caller has enjoyed great success since becoming the team’s starter in 2008.

He’s a two-time NFL MVP. He’s a two-time First-Team All-Pro and once a Second-Team selection. He’s been named to six Pro Bowls and was named the 2011 Associated Press Athlete of the Year.

And, yes, Aaron Rodgers is a Super Bowl winner and MVP.

Rodgers and his Packers teammates won Super Bowl XLV after the 2010-11 season by defeating the Pittsburgh Steelers 31-25. Rodgers was brilliant that Sunday evening, completing 24 of 39 passes for 304 yards and 3 touchdowns to earn Most Valuable Players honors.

That’s the only time the 2005 first-round pick has ever been to the Super Bowl.

But he’s getting another shot this year. Rodgers and Green Bay head to the Georgia Dome on Sunday to meet the Atlanta Falcons in the NFC Championship Game. The winner punches their ticket to Houston for Super Bowl LI on Sunday, February 5.

Rodgers is almost certainly headed to Canton when his playing days are over. The accolades listed above are Pro Football Hall of Fame worthy and his career stats pad the resume even more.

He’s the career leader in passer rating at 104.1 and holds the best touchdown-to-interception ratio in NFL history (4.13 TDs per INT). Rodgers’ interception rate of 1.5 percent is also the lowest in league history. He ranks 11th in career touchdown passes with 297 and 23rd in passing yards with 36,827.

And he’s rather young, showing absolutely no signs of slowing down. Rodgers just turned 33 in December, the same month he threw 9 touchdown passes to help him become the 2016 NFL leader with 40.

In other words, he’s going to continue to rise in rank in a number of career passing categories, barring something unforeseen.