After a Wild Card round that was littered with unsurprising--and mostly boring--blowouts, the Divisional round should offer NFL fans much more entertainment. OK, so the Patriots vs. Texans clash (New England favored by 15) is about as lopsided a matchup as you'll see this late in the postseason, but the other three games are full of intrigue. The Seahawks vs. Falcons and Steelers vs. Chiefs meetings are both rematches that were won by the lower seed during the regular season, while the Packers vs. Cowboys matchup features arguably the hottest team in the NFL against the NFC's top seed. In fact, you could make a legitimate case that Green Bay and Dallas are two of the three best teams in the NFL at this moment. It's going to be a thrilling weekend of football, and you can click through the gallery for my picks against the spread. You can also read here for more betting article and picks. (Getty) 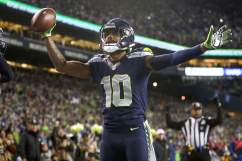