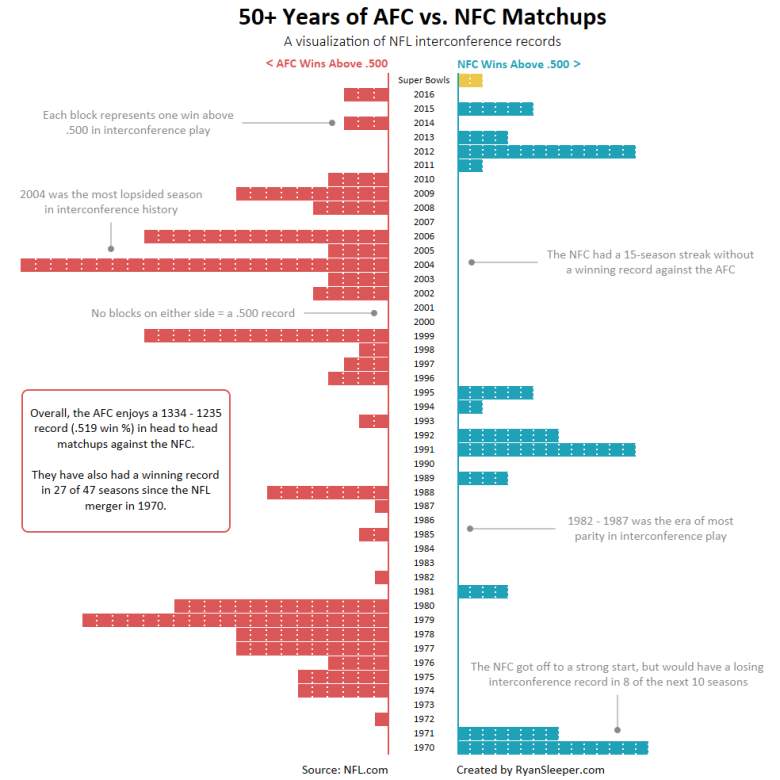 The data from RyanSleeper.com shows the AFC owns the regular season record over the NFC. Click here to view interactive version.

The NFL moves back to the traditional conference format in today’s Pro Bowl. According to Vegas Insider, Westgate has the NFC as a 4.5 point favorite in the 2017 Pro Bowl.

The over-under is set at 81 points. As the above data from RyanSleeper.com shows, the AFC has the 1334-1235 edge in overall head-to-head matchups since the merger.

In the last three matchups, former NFL players served as the coach/GM as teams were selected in a fantasy draft format where conference affiliation was not relevant to the game.

The last time the two conferences squared off in the Pro Bowl was 2013. The NFC has the slight 3-2 edge in the last five matchups.

The NFC appears to have the edge at quarterback in today’s game. Philip Rivers, Alex Smith and Andy Dalton lead the AFC squad. Drew Brees, Kirk Cousins and Dak Prescott will take turns under center for the NFC.

Where the NFC has the real edge is at wide receiver. Odell Beckham Jr., Dez Bryant, Mike Evans and Larry Fitzgerald are the top wide receivers for the NFC squad. Demaryius Thomas, Emmanuel Sanders, Jarvis Landry and T.Y. Hilton are the receiving core for the AFC.

Both teams have a nice stable of running backs. The AFC features Melvin Gordon, DeMarco Murray and Jay Ajayi. Ezekiel Elliott and Jordan Howard are the top backs for the NFC.

This game has a history of being high scoring with little defense being played. The over is a pretty safe bet as both teams are poised to light up the scoreboard with little resistance.

Heavy likes the the NFC receivers to propel the team to victory as the AFC struggles to find a way to slow the NFC offense down. 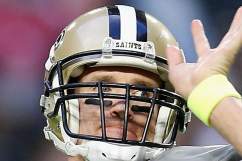