Toronto Raptors guard Kyle Lowry spoke to the media today, and when he was asked about his opinion on the immigration executive order signed by Donald Trump, he didn’t hold back.

The 10-year veteran from Villanova doesn’t have a history of being politically outspoken, but he hasn’t been alone in terms of NBA players make political statements on Trump. At least three NBA teams are boycotting Trump hotels this season in protest. 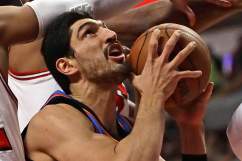