The end of the NFL regular season doesn't necessarily have to mean the end of fantasy football, as DFS contests will be held throughout the playoffs. That said, things are about to get pretty difficult. Not only are there small weekly slates from here on out, but in the postseason, games become more physical, defenses clamp down and scoring often drops. The projected totals for the four wild-card matchups are indicative of just that. The Dolphins at Steelers game has the highest over/under at just 47 points, the two NFC matchups are relatively low considering some of the high-powered offenses involved (Lions at Seahawks 42.5, Giants at Packers 44), and the barnburner between the Raiders and Texans (36.5) could get ugly. Nevertheless, there is still plenty of value to be found, and you can click through the gallery for my favorite DraftKings sleepers and contrarian plays for Saturday and Sunday's games. You can also read here for more DFS analysis, strategy and picks. (Getty) 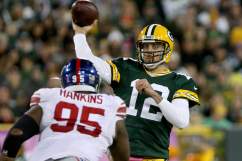