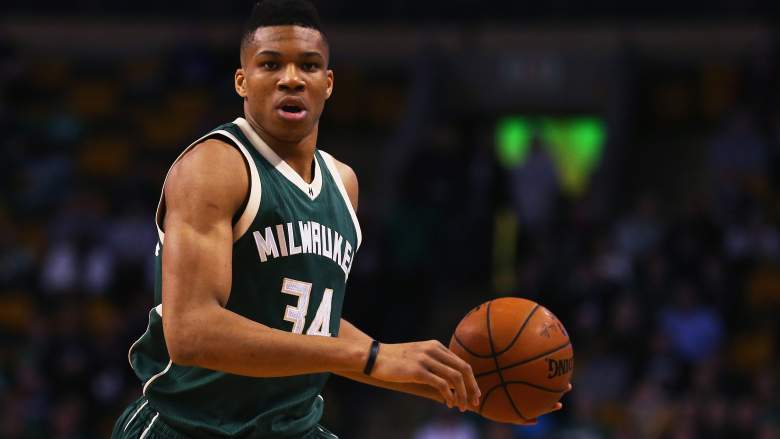 At 22, Giannis Antetokounmpo is already putting up rare stats. (Getty)

The 6-foot-11 Greek native does things daily that you’ve likely never seen from a player his size. Like, pin a shot against the backboard, lead the fast-break by himself, weave through the defense in a couple of steps and dish it off to a teammate for an open dunk:

Or, somehow get from half-court to the rim in a matter of two dribbles, finishing it off with a double-pump slam:

Antetokounmpo’s blend of length, athleticism, ball-handling and passing is truly rare, and those traits are a good explanation for how–in just his fourth NBA season–he’s putting up some historic numbers.

At the All-Star break, the Greek Freak is averaging 23.4 points, 8.6 rebounds, 5.4 assists, 2.0 blocks and 1.8 steals per game. While Russell Westbrook has a chance to become the first player since Oscar Robertson to average a triple-double, Antetokounmpo can become the first player since Kareem Abdul-Jabbar (1975-76) to average 20, 8, 5, 2 and 1.

Even if you lower those standards to 20 points, five rebounds, five assists, one steal and one block–numbers that Antetekounmpo is crushing–there are only 16 instances in NBA history when a player has achieved all of those marks in a single-season: LeBron James (three times), Kevin Garnett (three times), Michael Jordan (twice), Dwyane Wade (twice), Scottie Pippen (twice), Larry Bird, Kareem Abdul-Jabbar, Alex English and Chris Webber.

Antetokounmpo’s player efficiency rating (PER) of 26.6 would be the ninth-best among those seasons.

What’s most astounding is that Antetokounmpo is doing all of this without a real threat of a jump shot. Not only is he shooting just 27.5 percent from three, but he’s at just 33.1 percent on all shots from eight feet and further.

Teams can give him a cushion–he’s in just the 41st percentile in isolation situations as a result–but it ultimately doesn’t matter. He still gets 51.9 percent of his shots from the restricted area, and he’s shooting a career-high 52.5 percent from the field as a result.

When it comes down to it, the Greek Freak is already doing things statistically that only other NBA Hall-of-Famers or future Hall-of-Famers have accomplished, yet at just 22 years old, there are still significant holes in his game that can be improved.

That’s a scary thought–at least for the rest of the NBA.