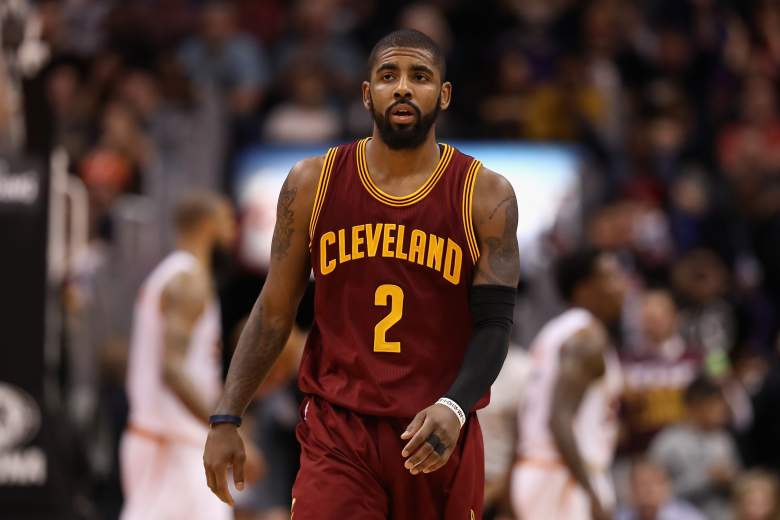 Kyrie Irving thinks we should be open to the idea of a flat earth. (Getty)

Cleveland Cavs point guard Kyrie Irving created quite a stir with his comments about the shape of the earth. In a podcast recorded with teammates Channing Frye and Richard Jefferson, Irving noted he believed the world is flat.

He clarified his statements in a later interview with ESPN’s Rachel Nichols, but he did not exactly back off his original thought of a flat earth.

I'd say Kyrie Irving makes it pretty clear here he's aware of the actual shape of the world, discusses the state of news today. pic.twitter.com/4lPH31Wshz

Irving expanded on his belief that the world is flat with NBC Sports.

After discussing the shape of the earth, Irving took on dinosaurs. Irving noted that what we think dinosaurs look like have been digitally enhanced.

Kyrie Irving not only believes the Earth is flat but that the jury is still out on what dinosaurs actually looked like. pic.twitter.com/0lkra9gPE3

Irving was surprised his comments on the podcast made news. It led to this interesting exchange with a reporter during media day of All-Star weekend.

It does sound like Irving truly believes the world is flat, but Irving should not expect any support from NBA commissioner Adam Silver. Silver does not consider himself a flat earth truther.

Irving may be able to gain support from Draymond Green. He noted he was open to being converted to Irving’s flat earth theory in this interview:

Here are some of the funniest memes and gifs from Irving’s flat earth controversy.

Everything is flat to Kyrie Irving, even the balls ? pic.twitter.com/tlp3rk3Zyr