Kyle Busch, Dale Earnhardt Jr. and Matt Kenseth are all out of the 2017 Daytona 500.

Busch lost a tire on his No. 18 car and wrecked into the wall on turn three during Lap 105 at the annual NASCAR race. He went to the garage and is officially out of the race for the day. Also involved in the crash were Kenseth, Earnhardt Jr., Elliott Sadler, Ty Dillon and Erik Jones.

Earnhardt Jr., who took the lead in Lap 97, was able to hop up and over the mess, but his crew was unable to fix the damage to his car in the allotted time and his day came to an end. Kenseth and Jones were also eliminated from the race because of the damage.

Dale Earnhardt Jr. has brought his car to the garage and he is done for the day with 92… https://t.co/F34uvZiGlo pic.twitter.com/bWYnUnl3xh

The crash went under a red flag following the crash and resumed about 25 minutes later.

Busch took a shot at Goodyear and their tires, saying they are to blame for the crash. He said that Goodyear tires “aren’t great at holding air” on the TV broadcast and then told a group of reporters that “Goodyear tires just suck” shortly after. Busch placed third at Daytona last year and was seeking his first-ever Daytona 500 championship.

Earnhardt Jr. and Kenseth were both seeking their third Daytona 500 championship in the 2017 race. 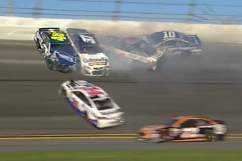