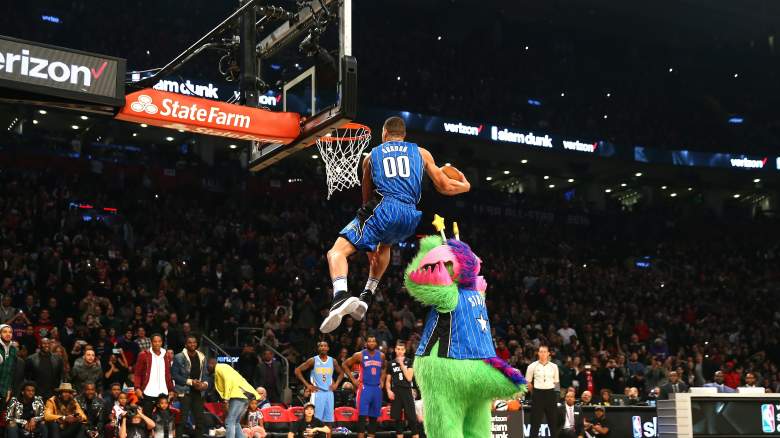 Aaron Gordon is back to put on another show at the 2017 NBA Dunk Contest. (Getty)

Though the 2017 NBA dunk contest will certainly miss Zach LaVine, who has led a resurgence of the annual event the last two years, it still makes for must-watch TV.

With Aaron Gordon and Derrick Jones Jr. headlining this year’s field, you can expect plenty of fireworks and a worthy encore to last year’s unforgettable performances.

Here’s a preview of the always anticipated event:

Start Time: Around 10 p.m. ET; The dunk contest is third in the trio of events at All-Star Saturday night (Skills Challenge, Three-Point Contest, Dunk Contest), which starts at 8 p.m. ET

Though he might be considered a sleeper because he has played a whopping 20 minutes in the NBA and spent the rest of the year in the D-League, 19-year-old Derrick Jones has turned into a trendy pick to win this thing.

And it’s not too difficult to see why:

Reminiscent of LaVine, “Airplane Mode” is an effortless leaper who doesn’t seem to abide by the same rules of gravity as everyone else (WARNING: NSFW language in the below video):

If he completes that through-the-legs-twice dunk, we might as well end the contest right there and then.

Nevertheless, it would disrespectful to consider anyone other than Aaron Gordon the favorite. The young Magic superstar, who blends a rare mix of athleticism, power, and creativity, put on an unforgettable show last year that many feel should have won him the title:

It would be surprising if this doesn’t come down to Jones vs. Gordon in the final, though Glenn Robinson III has the potential to crash the party:

Finally, there’s DeAndre Jordan. While he boasts big hops and thunderous power, he faces an uphill climb simply because big men don’t feature the same kind of aerial agility as the smaller guys.

Ultimately, if we only get a fraction of the excitement of last year’s event, it’ll be the perfect ending to All-Star Saturday night.