Michael Vick is officially retired from football. Vick confirmed the news to Sports Illustrated. According to TMZ, the former Atlanta Falcons quarterback held an “official retirement party” in Houston on the eve of Super Bowl 51. The party was co-hosted by rapper Gucci Mane.

The announcement came after Vick was not picked up by an NFL team during the 2016 season. Vick wanted to play one more season but was unsuccessful. Vick spoke at length about the decision to Sports Illustrated.

Yeah, I think it’s it. I’m kind of looking at life from a different perspective now. I’ve got kids growing that I’ve got to be there for. I was committed in 2016 to giving it one more shot. I’m very content with my career and what I’ve been able to accomplish. I accomplished more than I ever thought I would. Listen, at the end of the day, through all the downs I played, I can say I won a game for every team that I played for, even though I only made three starts in New York and three starts in Pittsburgh. I made a difference, I’m content with my career and I’m ready to move forward in life.

He last played in 2015 for the Pittsburgh Steelers where he appeared in five games. Vick also spent five seasons with the Philadelphia Eagles and a season with the Jets. He is best known for his six seasons (2001-2006) with the Falcons, and is credited for popularizing the idea of a dual-threat quarterback succeeding in the NFL.

Vick recently penned a heartfelt letter to Atlanta in The Players’ Tribune. He explained he still roots for the Falcons.

“The Falcons are back in the Super Bowl … and I’ll be there. Not on the field, like I’d once dreamed of. Not raising that trophy, like I’d once felt was my destiny. But I’ll be there, rooting for my team as hard as anyone. I’ll be sitting and watching, hoping and praying. I’ll be there, as if I was right there, still there, under center — as if I was an Atlanta Falcon myself. In my heart, I always will be,” Vick wrote in The Players’ Tribune.

Vick has not confirmed what his next career will look like but did allude to joining the sports media world. Vick self-destructed in Atlanta and spent almost two years in prison for his role in running a dogfighting ring.

The Falcons elected to move on from Vick and selected Matt Ryan in the 2008 NFL Draft. Since his release from prison, Vick has tried to make amends for his mistakes. He spoke with the Pittsburgh Post-Gazette about his efforts.

“The best thing to do was make amends for what I did. I can’t take it back. The only thing I can do is influence the masses of kids from going down the same road I went down. That’s why I work with the Humane Society and affecting a lot of kids’ lives and saving a lot of animals. We’ve had lot of a progress. We’ve been able to change some laws and do some great things that I’m very proud of. I never thought I’d be doing that,” Vick told the Pittsburgh Post-Gazette.

Since his playing career has ended, Vick has become a big Falcons fans and attends Falcons games when he is able. Vick was one of the most exciting players in the NFL with rare speed for a quarterback. In his last season in Atlanta, Vick threw for 2,474 yards, rushed for 1,039 yards and had a total of 22 touchdowns. It took time for him to heal after his time in Atlanta ended and admitted to Sports Illustrated that he was initially hurt.

“When they drafted Matt when I was prison, I was a little shocked. Stunned. A little bitter. A little salty. But I was able to get over it quick because I understood the circumstances,” Vick told with Sports Illustrated. 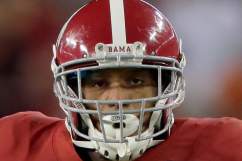