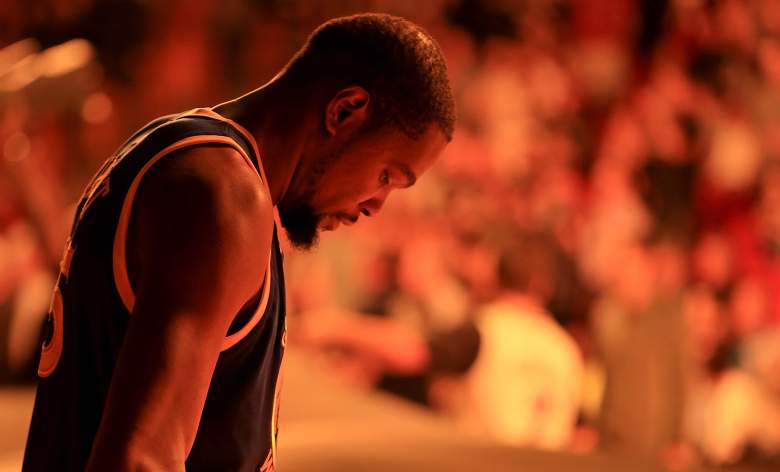 Kevin Durant signed with Golden State for a number of reasons. (Getty)

Kevin Durant’s return to Oklahoma City undoubtedly rubs salt on a wound that is still fresh for Thunder fans. Many have speculated a number of different theories as to why Durant headed west, but there is no one answer. Since he signed with Golden State, Durant has pointed to a number of different factors for his exit.

One of the most telling interviews came with Rolling Stone where Paul Solotaroff was able to get some insight on Durant’s thought process. Durant pointed to some of the missteps of the Thunder front office including trading away James Harden.

“Where other teams went out and got that veteran guy, we kept getting younger,” Durant explained to Rolling Stone.

His mother, Wanda Durant, explained what her son told her during the summer.

“For nine years, he refused to speak a word against that team – he loved those guys and that city, but this summer he said, ‘Mama, I can’t do it anymore. They’re not in this thing with me, we’re not together like we were – I feel like I need something different,'” Wanda told Rolling Stone.

Durant has admitted that if the Warriors did not blow their 3-1 lead and had won another NBA Championship he would not have signed with Golden State. When they missed out on the championship, it left the door open for Durant to be the missing piece. He also felt that when compared to teams like the Warriors and Cavaliers, the Thunder were not doing enough to construct a team that could consistently compete with teams with three superstars.

There have been some rumblings that Durant did not like playing with Russell Westbrook, but it is something Durant has consistently shot down. He explained to The Mercury News that his move away from Westbrook was more about his evolution as a person and had little to do with Westbrook.

“I’m trying to find out who I am. He knew who he was. He knew what he wanted to do. He got married young. He met his girlfriend in college. I didn’t have none of that. I didn’t have two parents in a home with me. I’m still trying to search and find out who I am. We end up going this way as far as off-the-court personality wise. And that’s not a bad thing,” Durant told The Mercury News.

All this confirms Durant’s first words on the subject when he wrote a letter in The Players’ Tribune telling the world he was headed to Golden State.

“The primary mandate I had for myself in making this decision was to have it based on the potential for my growth as a player — as that has always steered me in the right direction. But I am also at a point in my life where it is of equal importance to find an opportunity that encourages my evolution as a man: moving out of my comfort zone to a new city and community which offers the greatest potential for my contribution and personal growth,” Durant wrote in his Players’ Tribune letter.

All this complicates a really simple fact. The Warriors had Steph Curry, Draymond Green and Klay Thompson. Durant signing with the Warriors made them the instant favorites to win a championship and championship contenders for multiple seasons. It is a lineup Oklahoma City could not compete with. For all the personal reasons Durant has listed, he chose Golden State over his other options because they gave him the best chance to get an elusive ring.