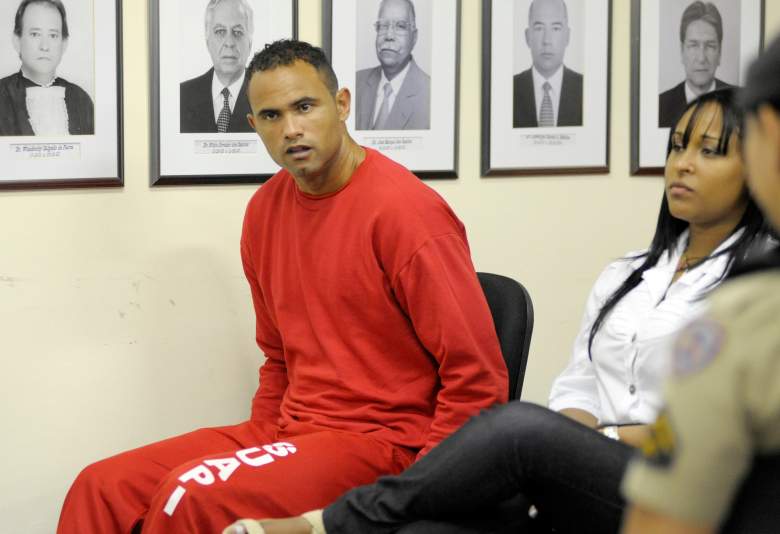 The 32-year-old goalkeeper signed a contract to play with Boa Esporte of the Brazilian soccer league Campeonato Brasileiro Série B on March 10, shortly after being released from prison. Bruno’s contract with the club is a two-year deal.

Fernandes de Souza, known simply as “Bruno” to many, was sentenced to 22 years in prison after he was convicted of murdering his former girlfriend, Eliza Samudio, in 2010. The woman had said that Bruno, who was married, was the father of her child and reportedly threatened legal action in an effort to obtain child support prior to her death.

Here’s what you need to know about Bruno:

1. Bruno Was Sentenced to 22 Years In Prison, But Is Out on Appeal 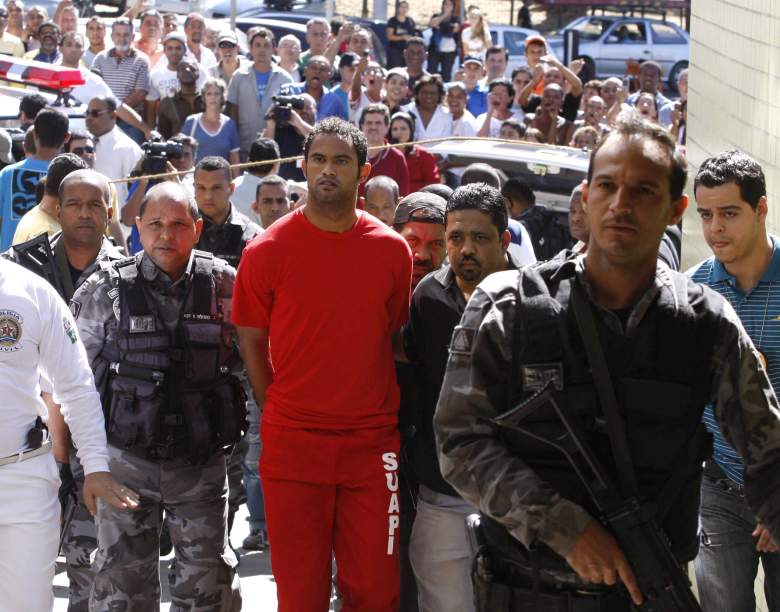 Samudio disappeared on June 9, 2010. She reportedly went missing after being taken to Bruno’s second home near Belo Horizonte, a city in Brazil.

One month later, a Brazilian judge ordered the arrest of Bruno in connection with her disappearance and the investigation that surrounded it.

In an interview with police, Bruno’s 17-year-old cousin, Jorge Rosa, admitted that he took part in the abduction of Samudio alongside his friend. He also told police that she wasn’t missing, instead she was dead. But he didn’t initially say how she died or where her remains were.

Rosa eventually told investigators that he and Bruno’s friend, Luiz Henrique Romao, picked up Samudio and her child from a hotel in Rio de Janeiro, telling her that she was being taken to speak with Bruno about the paternity claims. The four drove 220 miles to Bruno’s second home, and Samudio was held hostage for six days before being strangled to death.

A short while after Rosa’s confession, Bruno was charged with murder, kidnapping, forming a criminal gang, corrupting minors and hiding a body and he surrendered to police.

Brazilian Soccer Star Arrested in connection of murder of missing womanA Brazilian professional soccer player, suspected in the disappearance of a former mistress who claimed he fathered her child, surrendered to police here, authorities said. Bruno Fernandes, the goalkeeper for Brazil's most popular club Flamengo, turned himself in Wednesday along with his friend and fellow suspect Luiz Henrique Ferreira Romao at a police station in the neighbourhood of Andarai town, police said. The player's wife, Dayane Souza, also a suspect in the case, was arrested earlier. Police said that the Flamengo goalie was arrested in connection with the kidnap of 25-year-old Eliza Samudio, who has been missing since early June. The player's 17-year-old cousin said in a police interrogation that Samudio, a model, is dead, but he did not say who killed her or where her body might be found. The young man arrested Tuesday admitted to participating with Romao in kidnapping Samudio, who had been demanding that the player acknowledge his paternity of her 4-month-old son. He said that the model was placed by force into a Fernandes' car and added that he hit the woman on the head with a pistol after she had an argument with Romao. A DNA test released Wednesday confirmed that the traces of blood found in Fernandes' car belonged to Samudio. Meanwhile, Flamengo removed the player from its official roster until the case is resolved.2010-07-08T16:59:47Z

Samudio, who was 25 at the time, had a four-month-old baby and was believed to be demanding child support from Bruno. Her child was found with Bruno’s wife after her disappearance, according to Telegraph.

Seven others were also charged with carrying out Bruno’s orders to murder Samudio, including his wife, an ex-lover and an ex-police officer.

The trial in 2013 was a dramatic scene. Bruno cried as he told the court how Romao paid someone else to murder Samudio. He said to the jury that he didn’t order her killing, but he “accepted” it.

But the prosecutors in the case said that Bruno did indeed order her murder because she had threatened legal action against him if he didn’t pay child support. Bruno reportedly claimed that he was told about Samudio’s kidnapping after it had happened and that she had been taken to his second home where her hired killer was waiting.

Bruno was found guilty of the charges and sentenced to 22 years in prison. He served less than a third — seven years — of the sentence before his lawyers secured his release, The Guardian reported. The reason he was granted early release was due to a petition for habeas corpus, a document that reports an unlawful detention or imprisonment before a court. The petition was filed because Brazil’s slow courts failed to rule on his appeal for years.

Video of Bruno being released from prison and led to a car surfaced March 10.

In his 2013 trial, Bruno admitted that Samudio was murdered, dismembered and fed to dogs. Previously, he had said he was unaware what happened to her, claiming she was likely alive but out of the country.

Others charged in the case claimed hired Marcos Santos, a former military police officer, to torture Samudio before strangling her with a tie and chopping up her body. Parts of her corpse were allegedly fed to Santos’ rottweilers and the rest of them were buried in concrete.

Brazilian Goalkeeper Charged With MurderBrazilian goalkeeper Bruno has been charged with ordering the murder of a former lover who allegedly was trying to prove he was the father of her young son. Prosecutors filed charges on Wednesday against his wife, and eight others. (Aug. 5)2010-08-05T09:56:22Z

Bruno said during the trial that he wasn’t there for Samudio’s murder, but Rosa told him what happened.

There he held her hands and asked (Romao) to tie them in front of her, and put a tie around her neck. And (Romao) even kicked Eliza’s legs away. That’s what Jorge told me. And that they had chopped up her body, that they had thrown her body for the dogs to eat. 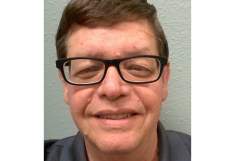 Brazilian footballer Bruno Fernandes de Souza (in red) is taken under custody to the presidium of Belo Horizonte, Brazil, in 2010. (Getty)

Bruno had refused to testify for much of the trial, denying the accusations and continuing to claim that he wasn’t sure where she was.

During a hearing, Romao informed the judge that he and the goalkeeper were no longer going to cooperate with the court. He told judge Pasta Marco Jose Couto Mattos that the “goalkeeper tried to kill himself several times” as a result of the trial and imprisonment.

But the Secretariat of Rio de Janeiro denied that Bruno had tried to commit suicide. Prior to a court hearing, Bruno fainted inside of a cell after he suffered from a drop in his blood-glucose level. 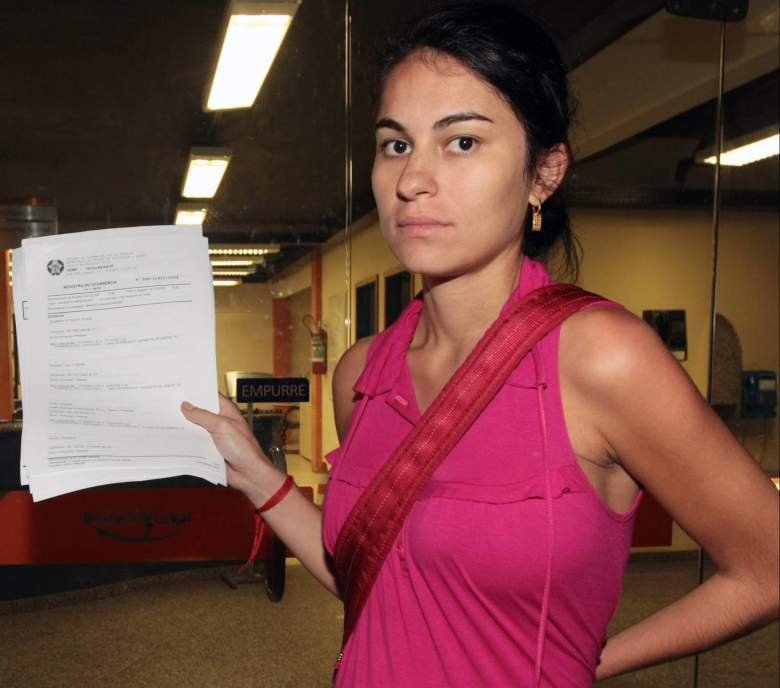 Samudio was a Brazilian model, a student and a big soccer fan.

Bruno then reportedly “demanded” that Samudio have an abortion, but she moved forward with the pregnancy despite his wishes. When she was about four months pregnant, Samudio allegedly had informed police that she was held captive by Bruno and others and was forced to take Cycotec, an illegal abortion drug. During the incident, Samudio claimed that Bruno placed a gun to her head and said, “You don’t know who I am or what I’m capable of. I’m from the favela.”

The Cyotec dose eventually failed, and Samudio ended up giving birth to the baby, named Bruninho, in February 2010. Bruno never acknowledged he was the father of the child and denied attempts to take a paternity test. Eventually, DNA tests proved that Bruninho was indeed the child of Bruno.

Samudio previously had claimed to have an affair with soccer star Cristiano Ronaldo. 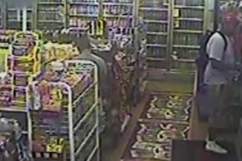 5. He’s Been Playing Professional Soccer Since 2002

FootBrazil's interview with Bruno Fernandes de SouzaLess than two months ago, Bruno Fernandes de Souza was the first choice keeper at Brazil's biggest club, Flamengo. Fernandes was team captain when the Rubro Negro's won the league at the end of 2009. We interviewed the player in May this year. The keeper always had a high profile but mixed in with the glamour associated with the life of a professional footballer was a reputation for the 'dark side'. In our interview, Fernandes claimed that he wanted to put his bad boy image behind him. Weeks later, he's one of the prime suspects in the disappearance and probable murder of Eliza da Silva Samudio. Samudio was the keeper's former lover and was claiming that her five-month old baby boy is Bruno's. The player is accused of organizing and being present at Samudio's murder. His friend and 'right hand man' Luiz Henrique Romão (aka Macarrão) is suspected of kidnapping Samudio. The murder, though, was allegedly carried out by former policeman Marcos Aparecido dos Santos who apparently strangled the victim before chopping her up and feeding the remains to his dogs. It's also believed that the group were planning to murder the five month year old baby. Fernandes, along with five other suspects, is currently being held in the Nelson Hungria prison in Belo Horizonte. Not surprisingly, Flamengo have suspended his contract. For more on Brazilian domestic and international football, especially rumours linking players with English clubs check out Pitacodogringo at http://bit.ly/HqHMo FootBrazil is produced in São Paulo, Brazil, by Bira Brasil, Jon Cotterill, Flavio Filho, Wilson Gomes, Juliano Mignacca, Daniel Minozzi, Fabio Sanches and Marcelo Zazzera at Globo TV Sports. For more information on where to see FootBrazil or the Campeonato Brasileiro and the Campeonato Paulista in your area, contact us athttp://bit.ly/m5Ttr2010-07-10T02:08:08Z

After playing youth soccer in Brazil, Bruno signed a deal with Atletico Mineiro in 2002 and played there until 2006. He played in 59 games with the club before signing to play for Corinthians. But Bruno spent all of his time with Corinthians as a backup to goalie Marcelo and never played in a single match.

His contract from Corinthians was loaned out to Flamengo, and Bruno was playing in Brazil’s highest soccer league, Campeonato Brasileiro Série A.

Due to injury of Flamengo’s starting goalkeeper, Bruno found himself as a starter right away and made the most of the opportunity. He helped the team win a national championship in 2007.

Bruno’s stock continued to rise in the soccer world and he was linked to a potential deal with Barcelona. Sensing his talent in the goal, Flamengo signed a permanent deal with Bruno in 2008.

One year later, Bruno was named the captain of Flamengo. He continued to find success and figured to play a part on Brazil’s national team eventually. But the murder charges and eventual conviction resulted in the Flamengo suspending Bruno’s contract. The club said it wouldn’t support Bruno or welcome him back even if he was found not guilty of the charges.

Read More
5 Fast Facts, Soccer
Brazil soccer player Bruno Fernandes de Souza, convicted in the murder his girlfriend in 2010, was released from prison and signed a contract with a new team.