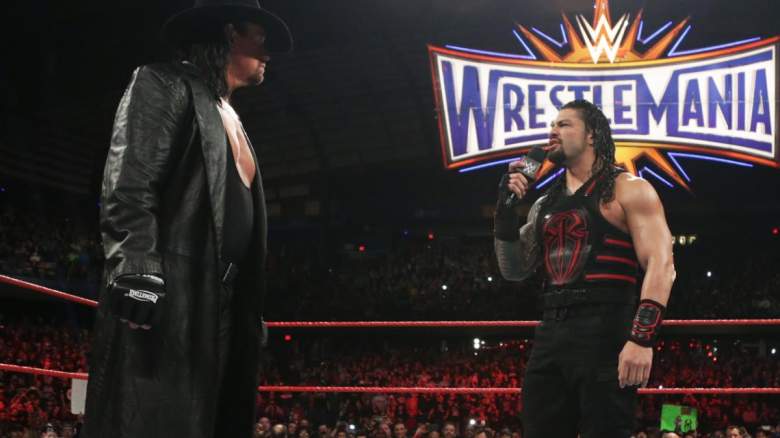 The Undertaker’s match against Roman Reigns was likely the last one of his career.

That was the rumor going into WrestleMania 33, with many believing that the yearly pay-per-view would be the end of Mark William Calaway’s career as a professional wrestler. Officially, the WWE did not announce this at The Undertaker’s last hurrah, but the end of the show certainly suggested that.

So let’s take a look at the evidence going into the show for and against the idea that this would be The Undertaker’s final WrestleMania.

One indication was the various health issues that Taker has recently been encountering. The 52-year-old reportedly underwent hip surgery this past September, according to Wrestling Inc, and around that time, a number of photos were posted online showing Calaway using crutches.

Another photo of The Undertaker. You can see the crutches in his trunk which tells you it's his. I hope he heals up soon. pic.twitter.com/teU8Lz0Axu

In January, after The Undertaker performed at the Royal Rumble pay-per-view, Dave Meltzer of the Wrestling Observer Newsletter reported that Taker was in a lot of pain after the show.

“So Undertaker, he was hurting real bad last night,” Meltzer said, according to Comicbook.com. “I mean you could look at him and you could see that he wasn’t in shape, and you know… it’s the hip…I mean there’s nothing else to really say about it…But even that when he was backstage he was hurting a lot.”

Meltzer also said that The Undertaker came back too quickly after his hip surgery.

The Wrestling Observer Newsletter also reported in January that The Undertaker needs full hip replacement surgery, but he’s hoping to put it off until after he retires, according to WrestleZone.

Last year, after The Undertaker’s match against Shane McMahon at WrestleMania 32, Taker reportedly said backstage that he didn’t think he could wrestle again, and Sportskeeda recently reported that Taker was originally meant to retire at WrestleMania 32 and that this decision was made around the time of WrestleMania 30. Obviously he changed his mind, but it looks like he only put off retirement for one more year.

Finally, PWInsider recently reported that WWE executives were planning this as The Undertaker’s final show.

“One of the biggest discussions backstage during Raw was the status of The Undertaker post-WrestleMania, as he was walking around in a great deal of pain. It was reported that he was not very happy at the event due to the level of pain he was in,” PWInsider reported, via Reddit. “As a result, the discussions increased that this year may indeed be the final WrestleMania for the Dead Man.”

That was some of the most compelling evidence from off-screen, but even on-screen, the WWE had been repeatedly teasing that this could be The Undertaker’s retirement. In a recent episode of Monday Night Raw, Roman Reigns told Shawn Michaels, “Undertaker retired you, and I’m going to retire The Undertaker.”

The WWE also recently put up a poll on their website asking, “Do you think Roman Reigns will retire The Undertaker at WrestleMania 33?” The options were “Yes. The Big Dog will end The Phenom’s in-ring career,” “No. Reigns may win the match, but it won’t be the end of The Deadman’s career,” and “No. Not only will Reigns not end The Undertaker’s career, he won’t win the match.” Going into the show, the final option, that The Undertaker will win and that it won’t be the end of his career, had 52 percent of the vote.

On the other hand, nobody knew for sure what to believe, as there had been rumors that The Undertaker was going to retire heading into pretty much every single WrestleMania this decade. That was especially true in 2014, when everyone was pretty confident that WrestleMania 30 would be The Undertaker’s retirement match. However, even after he was defeated by Brock Lesnar and the streak was ended, Taker kept on going.

But when WrestleMania 33 ended with The Undertaker taking off his outfit and slowly walking away from the ring, it became pretty clear that all of the rumors surrounding The Undertaker’s retirement were true.