Looking back, it's crazy how everything has changed except our bond. No matter where life takes us, what missions we are after or where our trail is leading… We ALWAYS have each other. To my heroes, best friends, fellow dream chasers, achievers and blood. Thank you for teaching me to fly. I love you. #GooniesNeverSayDie #ohana

WWE World Champion Bray Wyatt is constantly talking about Sister Abigail, a mysterious mentor of his who he appears to get all of his powers from. Michael Cole once said on commentary that Wyatt named the Sister Abigail move after his late sister.

That’s not true of Windham Lawrence Rotunda, the man who plays Bray Wyatt, but he really does have a sister: Mika Rotunda, who is very much alive. In fact, she is reportedly interested in getting into wrestling, and if the WWE ever decides to portray Sister Abigail on screen in some way, Mika would be a choice worth considering.

Here’s what you need to know about Bray Wyatt’s sister Mika Rotunda.

1. She Hosts a Radio Show

So stoked to officially be the newest member of #DGL on @1025TheBone !
I'll be on-air every Monday & Tuesday with the boys! ??? pic.twitter.com/50AQxUphzR

In March 2017, she became a co-host on Drew Garabo Live, a show on 102.5 The Bone, a station broadcast to Sarasota, Tampa Bay, and St. Petersburg, Florida. She is heard on the air every Monday and Tuesday.

Rotunda has prior experience as a broadcaster, previously appearing on CW44-TV, a news station in Tampa Bay, Florida. On her social media profiles, Rotunda is constantly seen traveling the world and filming something, whether it’s for a TV station or her personal YouTube channel.

Rotunda on her website describes herself by saying, “I host, write, move, shake and produce things. In my spare time, I like to seize all opportunities that life has to offer. Truth be told, I am a self-proclaimed enthusiast of life, with a unquenchable thirst for living, outside the box. My propensity it to help others and my mission is to change the way we all look at everyday. There is no challenge too grand and no task too insignificant for me to find a way to fall in love with my time here on Earth.”

On her YouTube channel, “Where2 NextMika,” much of her work is available for viewing.

2. She Is Into Health & Fitness

One of Mika Rotunda’s interests is health and fitness.

On her YouTube channel, she hosts a series called What2EatNext, which is all about nutrition. She has produced a number of videos about cooking and healthy eating, as well as some interview segments with a focus on living a healthy lifestyle.

In a 2015 interview, Mika said that she was definitely inspired by her family to get into fitness.

“As a teen, I was overweight and everything like that,” she said. “But just watching my family be so inspirational day in and day out, training and things like that, it made me want to improve my health and get better and stronger and faster, and it evolved into a passion.”

Rotunda recently started producing more nutrition content, and she just shot a new salad-related video, which she teased on her Instagram account but which has not yet been posted online.

? When you're really, super serious about your salad game! ?? #What2EatNext is about to bring you a NEW video that will make you, "Pretty Frggin' Happy!"? #Subscribe to my @youtube channel today and stay tuned for upcoming videos! Can't wait to share! Xo ?#stpetehealthylifestyles #where2nextmika #Nova535 Photo by @fusionphotography.stpete

On June 1st, 2017, Rotunda will be hosting an event called St. Pete Healthy Lifestyles at the Nova 535 event space in Florida. She held a similar event last year, which was focused on nutrition and self-care, with a number of local vendors attending and with Rotunda filming for her YouTube channel.

In a 2016 episode of Mika Rotunda’s food show, Bray Wyatt appeared as himself, Windham Rotunda.

Like her brothers, Rotunda works out frequently and can often be seen at the gym in her Instagram posts.

3. She is Friends With a Number of WWE Superstars & Will be Working WrestleMania

Happy day of birth to the man who's revolutionized what it means to be ALIVE! ? @TheRock #Inspiration?? pic.twitter.com/3wd9kQ7krn

Although Mika Rotunda is not signed with the WWE, she is close friends with a number of the company’s superstars, and she will be working behind the scenes at WrestleMania this year.

In a recent Instagram post, Rotunda said that at WrestleMania 33, she will be “doing what I do best, working behind the scenes,” explaining that she’ll be a part of the show’s production crew.

Rotunda is good friends with Natalya, frequently saying on social media that she is like a sister and a huge inspiration for her.

Happy Birthday to my sister from another mister and a huge inspiration to my life, @NatbyNature ! Xoxo ? #3G pic.twitter.com/YKpWwj3BGR

They say that happiest girls are always the prettiest! Love to you @NatbyNature ! My 3G sister always inspiring me!☺️ pic.twitter.com/MrtQ8tDmTl

#RoyalRumble is over! Only 62 Days to #wrestleMania at the #LevisStadium…Let the count down begin @NatbyNature #wwe pic.twitter.com/qFKzZm4tDA

Happy Birthday, to one of the women I respect most! My sister from another mister, @NatbyNature ! Xoxo pic.twitter.com/1zHDGED8nl

Backstage with this beauty!!! We are both third generation princesses? LOL! @mikarotunda #Raw

My legit soul sister's Birthday! Happiest of all happy days to you, @sashabankswwe ! Thank you for being a blessing in my life! Don't know what I would do without you!❤️? everybody go wish the boss a Beautiful birthday! You're my sister, my friend and my constant source of love and support! I love you and wish you the best, today and everyday sister!!!!

In 2015, she offered to be Becky Lynch’s tag team partner.

@SashaBanksWWE @BeckyLynchWWE I got you babe! ??✔️?

Rotunda has been going to WWE shows to see her brother perform for years, and she frequently posts photos from behind the scenes at live events.

4:53am! Up before the alarm? 100% charged and stoked for an amazing three days of shooting ahead! Blessings, on blessings on blessings! Wake up and go seize! Xo #Where2NextMika #ProductionLife ?☑️

Bray Wyatt is not the only wrestler in Mika Rotunda’s family.

Mika and Bray are both the children of Mike Rotunda, retired WWE wrestler who was active from 1984 to 2003. After his retirement, he still sporadically appeared on WWE television as Irwin R. Schyster, a tax collector character.

In an Instagram post, Mika Rotunda said that she remembers knowing from a young age how strong her dad was.

She explained, “Growing up, I always remember holding my dad’s hand and asking why they felt so, ‘tough?’ It never grossed me out though, I thought it was just part of what made my dad the man that he was. Vividly, I can also remember the relentless, diligent and heart he would pour into the gym.”

She goes on to say that her father set an example for her to persevere and pursue her dreams.

“So, I suppose you could say I’m born and raised daddy’s little princess,” she said. “But instead of him buying me cars, gifts or materialistic bullsh?… He gave me irreplaceable and infinite love and work ethic.”

On Twitter, Mika Rotunda said that Mike is ” Best dude I’ve ever known and I GET to call him, dad!!!!”

Mika’s two brothers are both professional wrestlers with the WWE. In addition to Bray Wyatt, her other brother is Bo Dallas. She has described Bray Wyatt and Bo Dallas as “my heroes, best friends, fellow dream chasers, achievers and blood.”

Looking back, it's crazy how everything has changed except our bond. No matter where life takes us, what missions we are after or where our trail is leading… We ALWAYS have each other. To my heroes, best friends, fellow dream chasers, achievers and blood. Thank you for teaching me to fly. I love you. #GooniesNeverSayDie #ohana

When I am homesick, miss my best friend, mama's cooking, dad's freezing cold man cave, a glass of wine with my sister in law, being put into a headlock in the living room, hearing the sound of my nieces laughing and puppies running circles at my feet … I look at this. And instantly, I'm reminded of how truly blessed I am to have them at all. ❤️

#ThrowbackThursday ? My dude for life!❤️

How I feel when the #SocialOutcasts come on #RAW !?? @WWE pic.twitter.com/Kim9HT7mZr

Mika Rotunda is reportedly interested in getting into professional wrestling herself.

In 2015, Sportskeeda reported that Rotunda was given a WWE tryout, with it being said at the time that she has been interested in wrestling for some time now. We never heard anything after that, but when Mika is asked about joining the WWE on social media, she usually gives a vague, non-denial answer.

For example, in May 2016, when asked when she is going to shake up the WWE women’s division, she simply said, “The possession of knowledge does not kill the sense of wonder and mystery. There is always more mystery.”

The possession of knowledge does not kill the sense of wonder and mystery. There is always more mystery.@WWE ⌛️ https://t.co/dI0cY6CmWf

In January 2016, Dave Meltzer of the Wrestling Observer Newsletter reported that the WWE is interested in introducing Sister Abigail on screen. This is the mysterious mentor that Bray Wyatt always talks about as being the person who raised him and gave him his powers.

“There is more talk as of late about the introduction of a Sister Abigail character,” Meltzer said. “It’s been talked about forever but apparently the talk has gotten more serious about doing it.

Introducing Sister Abigail on screen has become increasingly difficult to do as Bray Wyatt has added more and more to her backstory. It has been established that Sister Abigail is definitely dead, with Bray Wyatt himself even baptizing himself in her ashes on SmackDown Live recently. However, Abigail could possibly come back in the form of Mika Rotunda via a possession storyline. 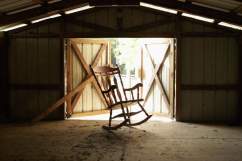