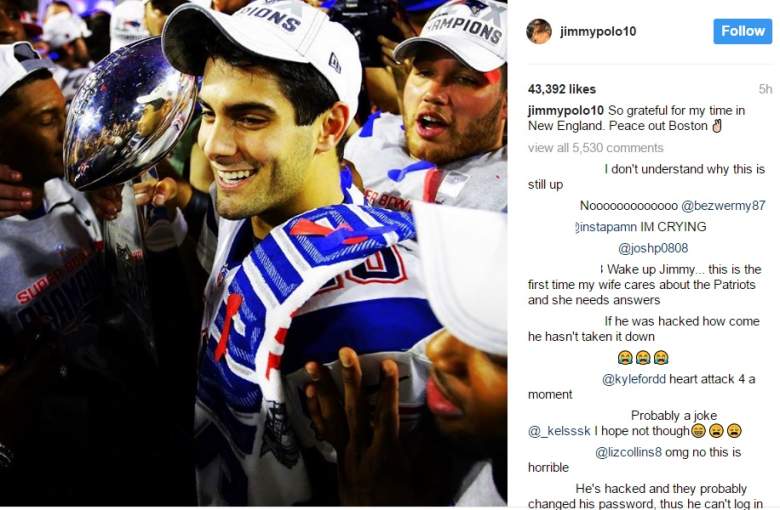 New England Patriots backup quarterback Jimmy Garoppolo sent fans in a frenzy early Friday morning with a “farewell” message on Instagram. But it turned out to be a possible hoax or hack and the Patriots are planning on keeping him.

The post, seen above, was first published around 4 a.m., but was later taken down. The person who had control of his Instagram account posted an image from the Super Bowl LI post-game victory celebrations, with the caption “So grateful for my time in New England. Peace out Boston.” He also included a “peace sign” emoji. It was up long enough for fans to wonder what was going on and some theorized that he was hacked.

A source close to Garoppolo told ESPN that he thinks his Instagram page was either hacked or it was a “hoax.” The source was asked about potential trades, but he added that there are “not to my knowledge” any in the works.

Garoppolo also took to Facebook to call the post a “hoax,” reports Sports Illustrated. However, Garoppolo’s page was later taken down completely from public view.

The post came after there were rumors that he was being traded to the Cleveland Browns, but ESPN’s Adam Shefter has insisted that the Patriots will not trade him.

“You could ask (Patriots coach Bill Belichick), and I am sure he will speak for himself, but I have spoken to enough people who have given me enough answers like (Thursday), someone else texted me and said, ‘Does Cleveland know we’re not trading Jimmy Garoppolo?’” Schefter explained to WEEI in Boston. “We’re going back to what we said before. I am basing my answers in what I believe is factual information. I know people want to take it in a different way. I am telling you that’s not right.”

Garoppolo has spent his entire three-year NFL career as Tom Brady’s backup and started the first two games of the 2016 season because of Brady’s Deflategate suspension. He completed 68.3 percent of his pass attempts, threw for four touchdowns and 502 yards and notably didn’t throw an interception. Since Brady turns 40 on August 3, the Patriots could be looking to keep Garoppolo as their quarterback of the future.

Although he’s been at the center of trade rumors since the 2016 season ended, Garoppolo told ESPN last month that he hasn’t been thinking about it too much.

“For the most part I’m just trying to stay level-headed, try not to overthink it too much,” Garoppolo told ESPN in February. “Because at the end of the day I’m still under contract. It’s not my decision if I get traded or if I don’t. So you try to take it all in stride.” 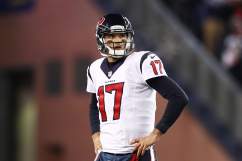