Thanks for everything cowboy nation. @candiceromo

Tony Romo appears to be headed out of Dallas. While we do not know the particulars, all signs point to Romo heading to a new destination. He posted this heartfelt message to Cowboys fans. The Houston Texans have cleared cap space by trading away Brock Osweiler. The move could have been done by Houston to try to take on Romo’s contract.

In the short video Romo posted at the start of free agency, Romo told Cowboys fans he felt the outpouring of love and support. He finished by saying he would “see what happens”. He jokingly finished by noting he would keep listening to Bob Dylan in the meantime as the video had a brief cameo of his wife.

The caption of the post reads: “Thanks for everything cowboy nation. @candiceromo.”

It is an odd video from Romo if it is not a foreshadowing of his exit given Romo has been a private person. Romo just joined Instagram over the off-season but uses it to mostly post photos of his children.

On the eve of NFL Free Agency, ESPN’s Adam Schefter reported the Cowboys were planning to release Romo to allow him to pick his destination. With just hours remaining before free agency started, ESPN’s Chris Mortensen reported the Cowboys appeared poised to trade Romo rather than release him. It has been a roller coaster of a story line.

The Texans and Broncos are two of the teams thought to be the likely landing spots for Romo. 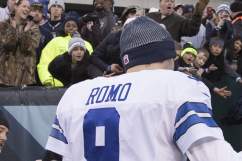 Read More
Dallas Cowboys, NFL
Tony Romo appears to be headed out of Dallas. Watch what could be his heartfelt goodbye to Cowboys fans.