To @tripleh who helps with projects, gives great big hugs, and cracks #DadJokes… We couldn't love you more. ❤️ #HappyFathersDay

Triple H & Stephanie McMahon’s children are beginning to approach the age where they may get involved in the WWE. After all, it was at the age of 13 that Stephanie McMahon began modeling merchandise for the the WWF’s catalog, and Stephanie’s youngest daughter is just about to turn 11.

Years after they “married” on screen in a Las Vegas wedding, Triple H and Stephanie McMahon were married in real life in 2003. They now have three daughters together.

So what information has been made public about Triple H and Stephanie McMahon’s family, and do their children have any interest in professional wrestling? Here’s what you need to know.

#HappyMothersDay to my incredible mother and all of the moms and moms to be in the world. I don't think I ever fully appreciated what it means to be a mother until I became one. It is the most unconditional love in the world, and I am so truly blessed to have my three daughters. Aurora, Murphy, and Vaughn you make all my dreams come true. I Love You more than you will ever know.

Aurora Rose Levesque was born on July 24th, 2006. Stephanie McMahon did not take a leave of absence during this time, continuing to work with the WWE while she was pregnant with her daughter.

In a 2016 interview with ESPN, Stephanie McMahon revealed that Aurora is very much into professional wrestling, and Stephanie seemed open to the possibility of her daughter joining the WWE one day.

“Aurora absolutely wants to be the women’s champion,” McMahon said. “She has been trained by Natalya. She has got her heart set on it, but we’ll see what happens there. I just want them to see unlimited opportunity and potential in themselves.”

This has evidently been true going back to 2014, when Stephanie McMahon made the same point in an interview with CBS Sports.

“[Aurora] has really been bit by the bug,” McMahon said. “She wants to be a Diva more than you can imagine”

In early 2016, Stephanie McMahon told The Miami Herald that Aurora was absolutely overjoyed when her father won at the Royal Rumble.

“I actually have video of my daughter Aurora because we didn’t tell her it was gonna happen,” she said. “Like everybody else, she had no idea Triple H, my husband, was going to be in the Royal Rumble, let alone win it. So I have this awesome video of her, and she was just beyond thrilled and wrote him one of the most beautiful notes that I have ever seen. It’s just amazing…What a wonderful life.”

Nothing like an Easter egg hunt :))) #HappyEaster to those who celebrate! This Sunday it's Easter, next Sunday it will be #WrestleMania! I can't believe we're only 1 week away!!!

In an interview with The Miami Herald, Stephanie McMahon said that she has had to raise her three daughters knowing that they will likely be bullied because their parents are television personalities.

“Our kids, life is going to be a little different for them given that their parents are on TV, and it’s something that I lived through and grew up with as well, but bullying happens, no matter who you are,” McMahon said. “They are a little more targeted because they are children of celebrities.”

Nothing says #Summer like Ice Cream in your PJ's! Hope everyone is enjoying their #LaborDayWeekend!

It seems that even at her young age, Vaughn may already aspire to be in the wrestling ring one day; Stephanie McMahon said in September 2016 that she has had pretend matches with her daughter Vaughn at home.

“I just had a ‘match’ with my six-year-old (Vaughn),” McMahon told The Straits Times. “She made me announce her entrance, entering to Katy Perry’s new song, Rise. She completely understands it all.”

In 2014, Stephanie McMahon took her daughter to see Katy Perry, and it seems that McMahon’s daughter was able to meet Perry backstage.

Thank you to the @nyknicks for the hospitality to my boys and I. Can't wait for #SDLive to rock @TheGarden next week. #TeamBlue pic.twitter.com/E9e4QTToA3

While Stephanie McMahon’s children have not made their debut on WWE television outside of being seen sitting at ringside, Shane’s children have, as his three sons accompanied him to the ring at WrestleMania 32. They all dressed like their father and did their best impression of Shane’s entrance dance.

Shane and his sons at Wrestlemania from SquaredCircle

5. They Recently Visited the White House 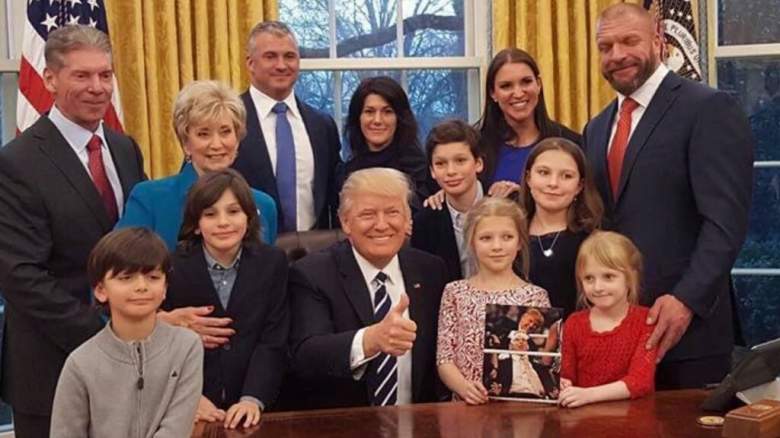 The McMahon family in the White House with Donald Trump. (Twitter)

Stephanie McMahon and Triple H’s children recently had the unique opportunity of visiting the White House and meeting the president of the United States.

This was because their grandmother, Linda McMahon, was being sworn in as the new head of the Small Business Administration. The entire McMahon family, including Stephanie’s three daughters, took a photo with President Donald Trump in the Oval Office.

In the photo, Stephanie McMahon’s daughters are seen holding up a photo of Donald Trump shaving Vince McMahon’s head at WrestleMania 23.