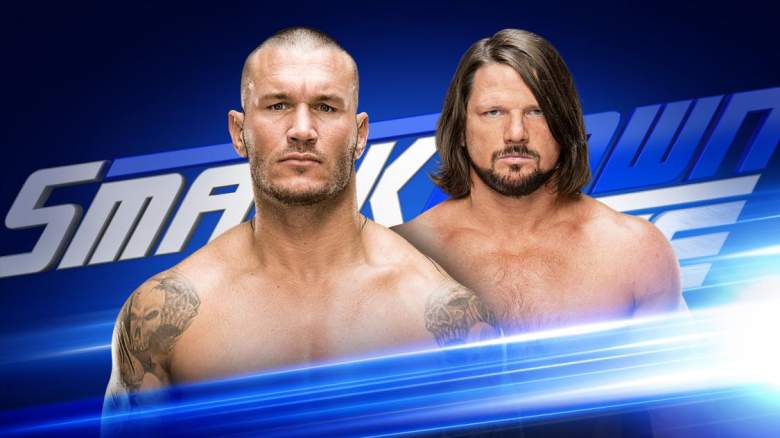 AJ Styles and Randy Orton will fight on SmackDown Live this evening. (WWE.com)

A new episode of SmackDown Live just finished airing on the USA Network. Here’s what happened in reverse chronological order:

9:30 – AJ Styles enters. He says that he single-handedly transformed SmackDown Live from the B show into the A show, yet he gets nothing but disrespect, but Randy Orton burns down a man’s house and he gets rewarded for it.

9:22 – After the match ends, Mickie James attacks Alexa Bliss and holds up the Women’s Championship.

8:52 – Alexa Bliss enters. She says that her WrestleMania opponent is definitely not going to Naomi, Nikki Bella, or Becky Lynch. She also calls Becky Lynch “Chucky,” as in the killer doll; like Chucky, Lynch keeps coming back after Bliss gets rid of her, she says.

Becky Lynch enters. She says that she is going to take back her Women’s Championship at WrestleMania.

Natalya enters. She says that she and Alexa Bliss came to an understanding last week: the two of them are championship-level material, but Becky Lynch isn’t in their league. Bliss brushes Natalya off, saying there’s no way she’s getting a title shot.

Mickie James grabs the mic and tells everyone to shut up. She says that they’re all stepping on Alexa Bliss’ announcement that she will be facing Mickie James at WrestleMania. Bliss is confused and says that she never agreed to this. All four them start arguing.

Daniel Bryan enters. He finds it interesting that Alexa Bliss has declared herself the greatest women’s superstar on the entire roster, and there’s only one way to really find out: Bliss will defend her title at WrestleMania against every single woman on the SmackDown roster. Bliss flips out and says this is unfair, but Daniel says his decision is final. He also books a tag team match for right now, with Becky Lynch and Natalya facing Mickie James and Alexa Bliss.

8:48 – In an interview, Mojo Rawley announces that he is the first entrant into the Andre the Giant Memorial Royal Rumble. Dolph Ziggler enters and mocks Mojo, telling him that WrestleMania moments don’t just get handed out. Mojo asks if that’s why Ziggler doesn’t have one.

8:40 – Curt Hawkins calls out Dean Ambrose in the ring. Ambrose enters and immediately destroys Hawkins. Ambrose then takes the mic and calls out Baron Corbin.

Baron Corbin appears on the titantron. He says that he doesn’t come out to the ring just because someone calls his name, but whne he’s ready, he’s going to take everything from Ambrose, including his title.

8:33 – In an interview, Randy Orton says that nobody is going to stop him from facing Bray Wyatt at WrestleMania.

8:30 – After the match ends, The Miz and Maryse attack John Cena and Nikki Bella. The Miz then enters the ring. He says that John Cena is a liar, and his relationship with Nikki Bella is the biggest lie of them all. He also suggests that Cena got together with Nikki just as a way of copying The Miz and because he knew it would be good for his brand.

8:18 – James Ellsworth tells the crowd that he’s about to humiliate John Cena in a match that will never be seen again. As proof that he is superior to Cena, Ellsworth points out that he defeated AJ Styles three times.

8:16 – AJ Styles confronts Daniel Bryan and Shane McMahon backstage. He says that he’s tired of this anti-AJ conspiracy, but he’s going to make the best of a bad situation by finally taking out Randy Orton. He insists that he’s not afraid of Orton.

8:00 – Shane McMahon and Daniel Bryan enter. Shane says that he and Daniel have yet to find out who is going to face Bray Wyatt at WrestleMania. Daniel thinks the opportunity should go to Randy Orton, but Shane thinks it should go to AJ Styles. Daniel argues that the tradition of the Royal Rumble winner going on to main event WrestleMania should be maintained, while Shane argues that Randy Orton lost his chance when he said three weeks ago that he refuses to face Bray Wyatt.

Because Daniel and Shane can’t agree, they decide that tonight there will be a match between Randy Orton and AJ Styles, with the winner facing Bray Wyatt at WrestleMania.