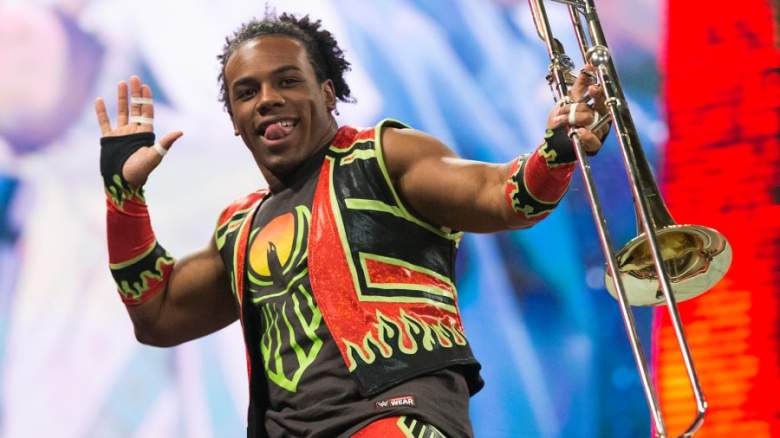 WWE superstar Xavier Woods is at the center of a scandal involving a leaked video of himself and fellow WWE wrestler Paige.

In the aftermath of this unfortunate leak, fans have been speculating about how the WWE might respond and whether Paige or Xavier Woods will be in any hot water with the company. It is generally thought that Woods will not face any repercussions, as he simply engaged in consensual sex in private and was the victim of an invasion of privacy. When Seth Rollins had private explicit photos leaked online, the WWE did not respond or reprimand him. Paige’s future with the company, however, is more unclear, as one of the leaked photos depicts Paige using the NXT Women’s Championship in a sex act.

Xavier Woods is a member of The New Day, the most popular tag team in the WWE, and he will be hosting WrestleMania 33 along with his teammates Kofi Kingston and Big E.

So who is Xavier Woods, and how did he get into wrestling in the first place? Here’s what you need to know about him.

Before coming to the WWE, Xavier Woods wrestled for NWA Anarchy and then Total Nonstop Action.

Early on in his career, Xavier Woods performed as a character named Austin Creed, which was clearly inspired by Apollo Creed from the Rocky movies. Though he later moved on from this character, he still goes by the name Austin Creed on social media and on his YouTube channel.

While with Total Nonstop Action Wrestling, Woods teamed up with R. Truth, and when Woods started wrestling as Consequences Creed, he and R. Truth formed a tag team called Truth and Consequences.

After leaving Total Nonstop Action, Woods wrestled with New Japan Pro Wrestling for a year before joining the WWE.

You can pre-order these pops! ??? @originalfunko @toysrus @wwe

In July 2010, Xavier Woods signed with the WWE. He at first wrestled under his real name, Austin Watson, but he soon adopted the name Xavier Woods.

He made his main roster debut in November 2013, when he again teamed up with R. Truth. They remained together for about seven months but were repeatedly unsuccessful in matches and eventually went their separate ways.

Meanwhile, Kofi Kingston and Big E were in a tag team at the time as well, and they were also suffering a number of defeats. So in July 2014, Kofi Kingston, Big E, and Xavier Woods teamed up, and their tag team was eventually named The New Day.

3. He’s Working Towards a PhD

Over the past few years, he has been working towards earning his PhD in educational psychology. Woods said during a 2015 interview on the PodNasty Wrestling Podcast that he hopes this inspires kids out there to stay in school.

“[I]f there’s a kid who’s out there in the world watching wrestling, and they see me and they know I have my PhD while I was wrestling, that could possibly inspire them to not drop out of school, to not drop out of college, to go and obtain that type of educational status, and that to me means a lot more [than winning a WWE championship],” Woods said, according to Bleacher Report.

Woods revealed in a 2016 interview that he recently ran into some difficulty on his road to a PhD. He says that he was attending Walden University but that the school refused to accept his dissertation topic, repeatedly not approving it for two years. Eventually he got fed up with them and left the school, transferring to Capella University, but about 100 of his credits did not carry over.

“It’s a soul crushing thing because that’s all I’ve wanted, and so as of right now, I’m not in school, but I will go back once things ease up a little bit,” he said. “…Since I was a little kid, this is all I’ve wanted.”

Sasha Banks vs. Bayley IV – INJUSTICE 2: PEPPER & HOT SAUCE CHALLENGE — Gamer GauntletSUBSCRIBE: http://bit.ly/upupdwndwn Bayley. Sasha. PART FOUR. What happens when two of Raw's top Superstars square off again for dominance in the video game world? DESTRUCTION! More is on the line as the two play Injustice 2 as the loser must consume a pepper completely doused in hot sriracha sauce! Like us on Facebook: http://www.facebook.com/UpUpDwnDwn Follow…2017-03-17T18:40:47.000Z

Outside of wrestling, one of Xavier Woods’ obsessions in life is video games.

After all, he hosts a video game series on YouTube called UpUpDownDown, which he films while on the road. He addresses viewers in the show as Austin Creed, not Xavier Woods. However, he frequently has fellow WWE stars on as special guests. Recently, he had Sasha Banks and Bayley on the show playing Injustice 2, and Stephanie McMahon also made an appearance last week.

This past week, UpUpDownDown’s YouTube channel reached one million subscribers. This prompted a number of WWE employees to offer their congratulations to Xavier Woods, including Vince McMahon himself.

In 2015, Xavier Woods got his first tattoo: the Hylian Crest from The Legend of Zelda.

Xavier Woods says that he hopes to break stereotypes by both being a professional athlete and a hardcore gamer.

“I think a lot of people think that since we are professional athletes that we can’t have certain tendencies that other people might have, like they try to put people in a box and say, ‘You’re an athlete, which means you’re a jock,’ or ‘You like reading books, so you’re a nerd,’ so you can’t be more than one thing in a lot of people’s eyes,” Woods told the Phoenix New Times. “Whereas I wrestled, I played football, I ran track but I also made straight As, and I also played through Final Fantasy VII like 900 times and I also love Street Fighter and I also love comic books.”

5. He Is Married With a Child on the Way

Happy new year! Everyone stay safe and have a good one! #happynewyear #2016

In December 2016, Jess Watson revealed that she is pregnant and that her child with Xavier Woods is due in May 2017.

Very little is known about Jess Watson’s relationship with Xavier Woods, but they were reportedly wed in October 2015, according to Sportskeeda.

Read More
Pro Wrestling, WWE, WWE Raw
Xavier Woods is a WWE superstar who is married with a child on the way and who is currently pursuing a PhD.