Former New England Patriots player and convicted murderer Aaron Hernandez was found dead inside his jail cell on April 19, 2017. According to authorities, Hernandez used a bed sheet to hang himself, less than a week after he was acquitted of a double homicide.

“Chief Medical Examiner Dr. Henry N. Nields performed an autopsy on Mr. Hernandez on Wednesday and concluded today that the manner of death was suicide and the cause asphyxia by hanging,” Early said. “An investigation into the death by the State Police Detectives assigned to the District Attorney’s Office and Department of Correction investigators found cardboard jammed into the door tracks of his single-inmate cell to impede entry into the cell. There were no signs of a struggle, and investigators determined that Mr. Hernandez was alone at the time of the hanging.”

Hernandez’s body was released on Wednesday and Hernandez’s brain were taken to Boston University’s CTE Center, at the family’s request.

Hernandez’s attorney, Jose Baez, is not buying the authorities’ version of events, telling TMZ that he will launch an investigation to find out if his client was murdered behind bars. On Friday, The Boston Globe reported that Hernandez’s fiancee, Shayanna Jenkins Hernandez, filed a lawsuit against the Department of Correction, to get the state to release all of Hernandez’s suicide notes. Early’s statement didn’t say who the notes were addressed to or what Hernandez wrote.

The attorneys have asked the state to give them access to other pieces of evidence, including the contents of Hernandez’s cell; video recordings and logs of the cellblock and Hernandez’s own cell; medical equipment used on Hernandez; photos of the scene; hospital and prison medical records; and the clothes Hernandez was wearing at the time he received emergency treatment.

Hernandez is survived by his mother, brother, Jenkins-Hernandez and his 4-year-old daughter, Avielle Janelle Hernandez.

“We are aware of the reports but I don’t anticipate that we will be commenting today,” Patriots spokesman Stacey James told the Associated Press.

1. Police Say He Hanged Himself Using a Single Bed Sheet, but His Attorney Thinks He Was Murdered

Hernandez was found at the Souza Baranowksi Correctional Facility in Shirley, Massachusetts, at 3:05 a.m. by correctional officers, according to a statement from the Massachusetts Department of Corrections. He was rushed to UMASS Leominster, where he was pronounced dead at 4:07 a.m. by a doctor.

According to the statement, Hernandez used a single bed sheet to hang himself, attaching it to his cell window. He tried to block officers from coming into his cell using “various items.” He was in a single cell in a general population housing unit. His family was already notified when the DOC issued its statement.

Despite the statement from the DOC, attorney Jose Baez told TMZ that he doesn’t think his client would kill himself because he thought his previous murder conviction would be overturned. His family is “devastated,” Baez told TMZ, and he will launch an investigation to see if Hernandez was murdered.

Baez also sent a statement to WBZ, confirming that his law firm will conduct its own investigation.

Brian Murphy, Hernandez’s agent, also thinks that Hernandez could not have taken his own life.

Absolutely no chance he took his own life. Chico was not a saint, but my family and I loved him and he would never take his own life.

WBZ in Boston reported that Hernandez was found with the Bible verse John 3:16 written on his forehead.

“For God so loved the world that he gave his one and only Son, that whoever believes in him shall not perish but have eternal life,” the verse reads.

Fox 25 reported that the verse was written in his own blood. According to a source for the station, Hernandez cut his finger and used the blood to write the verse.

Meanwhile, Massachusetts Bar Association chief legal counsel Martin W. Healy explained to the Boston Globe that Hernandez might have died an innocent man because he had not completely exhausted all of his legal appeals in the Lloyd conviction. He said it’s a legal principle called “abatement ab initio,” which means “from the beginning.” While many states have abandoned the principle, Massachusetts has not, Healy told the Globe.

“This is a shocking and sad end to a very tragic series of events that has negatively impacted a number of families,” the Bristol County District Attorney’s Office said in a statement to WHDH.

On April 20, Baez told reporters that Hernandez’s family wants to donate Hernandez’s brain to Boston University for concussion research, according to the Associated Press. However, the body was taken to a funeral home on April 19 and the brain hasn’t been returned. Baez said he’d go to court if he has to and wants an independent autopsy completed.

However, this was all for naught as the M.E. has agreed to release Hernandez’s brain to Boston University. Early, the Worcester D.A., also confirmed that investigators found three handwritten suicide notes and a Bible in his cell.

2. His Death Came Just Days After He Was Acquitted of the 2012 Double Homicide of Daniel de Abreu and Safiro Furtado 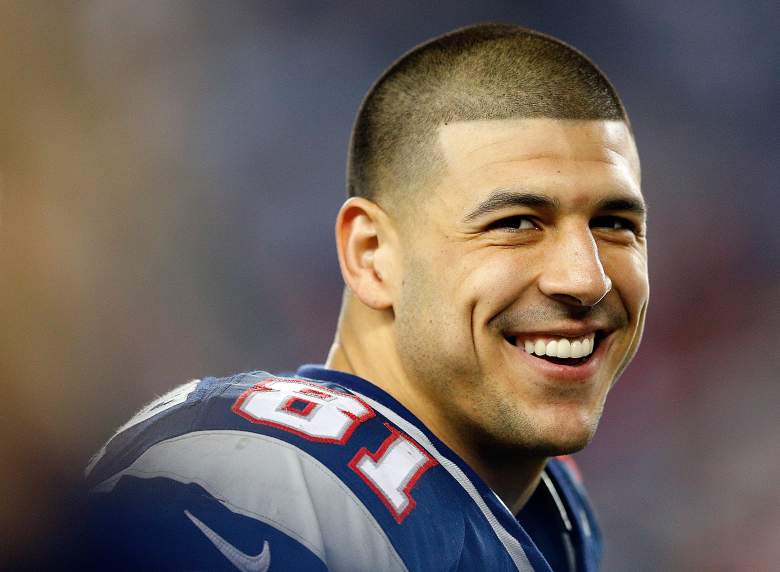 On April 14, 2017, Hernandez was acquitted of the double homicide of Daniel de Abreau and Safiro Furtado, both of whom died in 2012. The Boston Globe reported that Hernandez was found not guilty on all charges related to their deaths, except for one gun-related crime.

While members of the victims’ families did not speak to the media, one relative yelled in the courtroom, “He got away with murder!”

According to the Globe, Ronald Sullivan, one of Hernandez’s lawyers, told the jury during closing arguments that state prosecutors had given immunity to the “actual perpetrator of this crime,” referring to Alexander Bradley.

Bradley testified that he was driving a Toyota 4Runner owned by Hernandez when the former football player fired at the two victims on July 16, 2012. The defense said that Bradley fired at the two victims over a drug sale. Bradley is in jail for shooting at a Hartford club in 2014 and an admitted drug dealer. Bradley testified that Hernandez shot him in February 2013 at a South Florida nightclub and left him for dead. Ultimately, the jury didn’t believe this story.

District Attorney Daniel F. Conley told the Globe that it was comforting to the victims’ families that Hernandez was still spending the rest of his life in jail. “In fact, that was said by one of the family members — ‘at least he’s not walking out the door today.’”

During the trial, Jenkins-Hernandez brought their daughter Avielle to court for the first time, reports Yahoo Sports. Hernandez’s face lit up when he saw her and Avielle cried because she couldn’t be with her father.

3. He Was Serving a Life Sentence for the Murder of Odin Lloyd 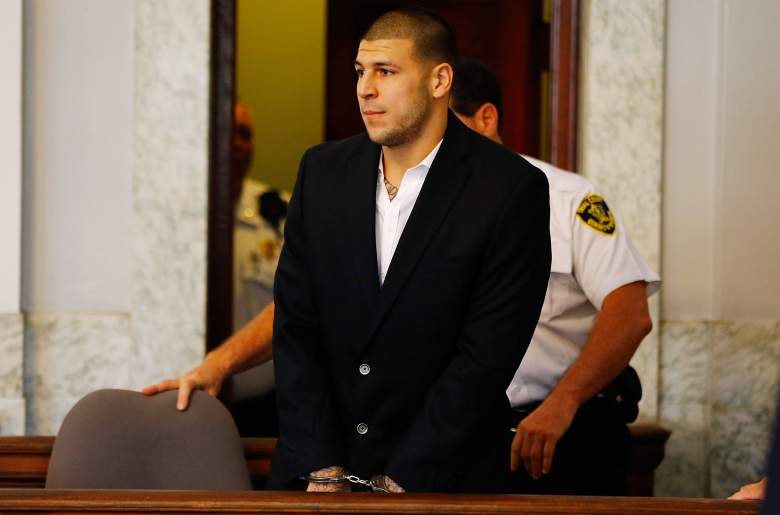 Hernandez insisted that he didn’t do it, saying, “They got it wrong” after the verdict was read.

During the trial, the defense said that Lloyd was Hernandez’s marijuana dealer and was going to be his brother-in-law. Shayana Jenkins-Hernandez’s sister, Shaneah, was dating Lloyd at the time of his death.

Jenkins-Hernandez did testify during the trial, telling prosecutors that Hernandez told her to “go downstairs in our storage and remove a box from our home” the day after Lloyd was killed. She threw the box away in a “random dumpster.” She also testified that she saw phone messages that led her to believe that he was cheating on her, but the couple tried to stay together to work out their problems.

“Aaron Hernandez may have been a well-known New England Patriots football player. However, in the end, the jury found that he was just a man who committed a brutal murder,” Bristol County District Attorney Thomas Quinn told the media after Hernadez was convicted. “The fact that he was a professional athlete meant nothing in the end. He is a citizen who was held accountable by the jury for his depraved conduct.”

Hernandez was still appealing that conviction. According to the Boston Globe, Hernandez’s case was set to go before the Supreme Judicial Court, which could have decided to hold a new trial or uphold the conviction.

4. There Were No Reports That He Tried to Commit Suicide Before

Although there were reports during his time in prison that he would get into fights, WHDH notes that there were no reports of previous suicide attempts.

While Hernandez got into a number of fights in prison, no reports that he had attempted to commit suicide before. #AaronHernandez

There were several reports in the Boston media during Hernandez’s time in prison that he got into several fights with other inmates. In August 2015, WCVB reported that Hernandez got into his third fighti n two years in prison.

In June 2015, TMZ obtained a hand-written letter from Hernandez, in which he claimed he was “doing well” in prison and received “numerous fan letters daily!”

Additionally, there were rumors that Hernandez had a gay lover. After Hernandez was found dead in his prison cell, reports surfaced claiming that his close relationship with another inmate named Kyle Kennedy was more than just a platonic friendship. This is something that Hernandez’s fiancee has denied.

“I had no indication or any feeling that he was gay. He was very much a man to me. I don’t know where this came from. It’s embarrassing in a sense, it’s hurtful. Regardless if it was true or not, it’s just not something that I saw. It’s not something I believe and it’s not him,” Jenkins Hernandez told Dr. Phil in May of last year.

5. The Patriots Signed Hernandez to a $40 Million Contract Months Before He Was Charged With Murder

Hernandez was drafted by the Patriots in 2010 after his sophomore year at Florida. After two years, it looked like the Patriots would have the best tight end group in the NFL with Rob Gronkowski and Hernandez.

In August 2012, The Boston Globe reported that Hernandez was signed to a five-year contract extension with a maximum value of $40 million.

The Patriots released Hernandez in 2013, after he was charged with the murder of Odin Lloyd. In July 2013, Patriots owner Robert Kraft told ESPN that he believed he was “duped” if it was true that Hernandez killed Lloyd. Kraft said he thought Hernandez was a “most likable young man.” He said the Patriots “made a mistake and are facing it head on” and “You can be sure we’ll be looking at our procedures and auditing how we do things.”

“Following Aaron’s arrest, I read a number of different accounts of how things transpired in our organization. Let me be clear: We decided the week prior to Aaron’s arrest that if Aaron was arrested in connection with the Lloyd murder case that we would cut him immediately after,” Kraft said in a statement at the time. “The rationale behind that decision was that if any member of the New England Patriots organization is close enough to a murder investigation to actually get arrested — whether it be for obstruction of justice or the crime itself, it is too close to an unthinkable act for that person to be part of this organization going forward.”

On July 24, 2013, Patriots coach Bill Bellichick told the media, “Our thoughts and prayers are with the family of the victim, and I extend my sympathy, really, to everyone that’s been impacted. A young man lost his life. And his family’s suffered a tragic loss, and there’s no way to understate that.”

While in prison, Hernandez grew to hate Kraft. In a letter TMZ obtained, Hernandez wrote that Kraft is a “fake ass non loyal Kraft who told me he loved me every time he seen me but obviously shows his word ain’t sh*t” and called him a “phony.” 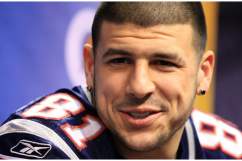