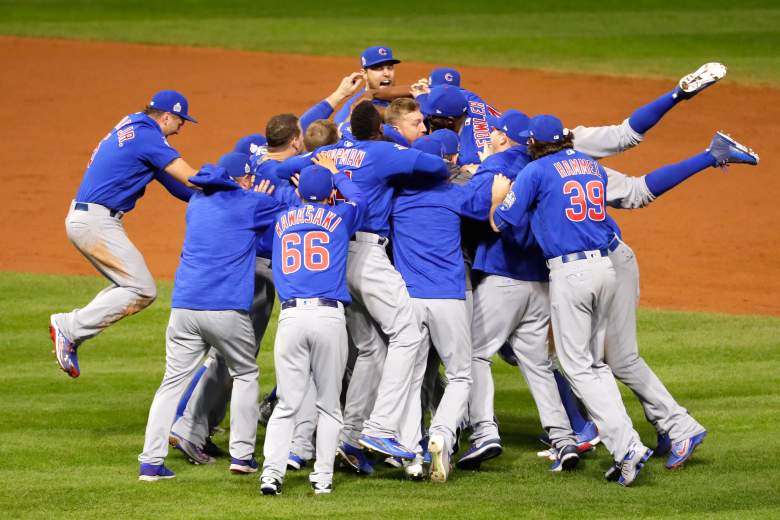 The Chicago Cubs celebrate after defeating the Cleveland Indians to win the 2016 World Series. (Getty)

For the first time in six months, the Chicago Cubs are back playing at Wrigley Field.

Officially one week into the 2017 season, the defending World Series champions will have their first home game. Chicago takes on the Los Angeles Dodgers at 8:05 EDT on Monday. The game will be televised on ESPN and begin with a the championship banner being unveiled at Wrigley.

Here are a bunch of options on how to watch the game live online:

There are a couple different options, depending on whether or not you have a cable subscription or log-in information.

Users without a cable subscription can watch ESPN via Sling TV, an online streaming service that provides access to select channels for a monthly fee. Here’s how to sign up for a free 7-day trial:

4) Select the channel package or packages you want. Make sure to include Sling Orange, which includes ESPN and ESPN 2

5) Enter your payment information. Sling Orange costs $20 per month, but if you cancel your subscription within seven days of signing up, you will not be charged

If you have a Sling TV subscription (read above to learn how to start a free trial), you can watch ESPN’s coverage on mobile and other compatible devices via the Sling TV app, which is free to download in the following locations:

ESPN can be watched live online via WatchESPN.com. You will need to log in using your pay TV provider username and password to watch the stream.

If you’re a cable subscriber and are looking to watch ESPN on your mobile or streaming devices, you can do so via the ESPN app, which is free to download at the following places:

As is the case with desktop, you’ll need the log-in for a cable subscription to watch.

Overview of Cubs Live Streaming Options For the 2017 Season

The Cubs live streaming landscape is more complex than it is for most teams, because the team’s local broadcasts are split between three networks: CSN Chicago, WGN and ABC-7. (Some of the CSN Chicago games are on CSN Chicago Plus, which is available as part of the same streaming services that include CSN Chicago.) A handful of games are also televised nationally on ESPN, Fox and Fox Sports 1.

Unfortunately, there’s no way to legally stream WGN broadcasts, even if you have a cable or satellite log-in. But if you’re in the Chicago TV market, it’s possible to watch games on any other network through one or more online streaming services. We’ll provide a brief overview of the options first, then break things down in greater detail.

— Fubo TV: Fubo started out as a soccer-only service before drastically expanding its offering late last year. It now offers an array of national and regional networks that includes the CSN regional networks, along with Fox and Fox Sports 1. Like Sling, Fubo offers a free seven-day trial. You’ll need to enter your credit card information to launch the trial, but if you cancel your subscription before the trial ends, you won’t be charged. One advantage to Fubo is the ability to DVR content and watch it later. One disadvantage relative to Sling: Fubo does not carry ESPN or ABC. If you sign up for Fubo and not Sling, you’ll have access to fewer games. You can click here to launch the free trial and test it out.

DirecTV Now, a new streaming service powered by DirecTV, is also an option for games on ESPN, ABC, Fox and Fox Sports 1. But unlike Sling and Fubo, the service does not include CSN Chicago, meaning the majority of Cubs games are not accessible through the service.

If you’re outside the Chicago TV market, things are pretty simple: You can watch every local broadcast on just about any device through MLB.TV, a subscription service that offers access to every out-of-market game in the Major Leagues.

Looking for more information on which options are best for you? Let’s get into a bit more detail about what each service offers.

Fubo TV, for Fans in the Chicago TV Market

If you’re looking to test out a new product and you’re not concerned about the lack of ESPN or ABC, Fubo is an interesting option. The service includes CSN Chicago, Fox and Fox Sports 1, so you’ll have access to a majority of Cubs games. Also worth noting: Fubo is a fledgling product that’s still growing its arsenal of channels. It’s possible the service will add ESPN before the end of the season.

So what advantages does it provide over Sling? The biggest is the option to DVR content and watch it later. If you’re a big enough fan to tape games and watch them later on nights when you’re not able to watch live, the DVR feature is an awfully nice perk. If you’re at a computer, you’ll also have the opportunity to watch TV right in your Internet browser without having to download a desktop app. Lastly: The service allows you to sign in using your Facebook or Google account — a nice perk that not all services offer.

Fubo offers a base package, called Fubo Premier, that includes 51 channels and costs $34.99 per month after the end of the free trial. The service offers various add-ons ranging from an additional $4.99 to an additional $14.99 per month, but none of the packages involve channels that air Cubs games.

The process of signing up is simple:

MLB.TV, for Fans Outside the Chicago TV Market

In addition to being able to watch on your computer, you can watch through the MLB At-Bat app.

The app is also available on Apple TV, Chromecast, Roku, Amazon Fire TV, XBox One, XBox 360, PlayStation3, PlayStation 4, and a handful of other connected devices. Click here for a full rundown of devices that carry the app.