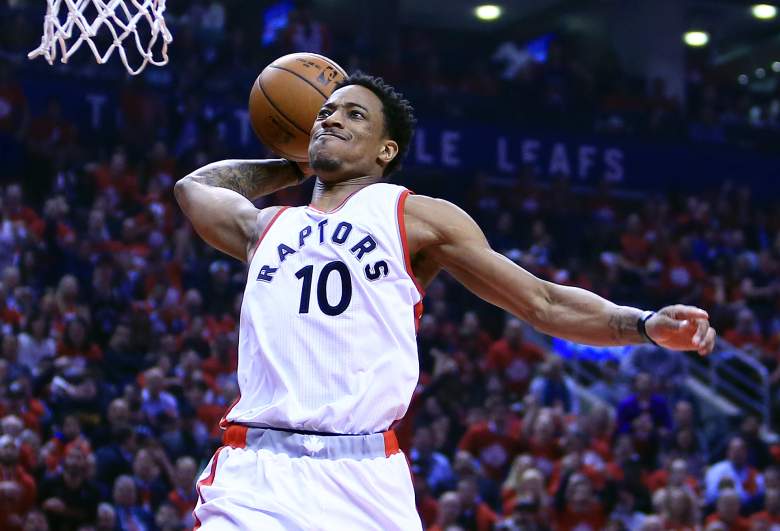 DeMar DeRozan of the Toronto Raptors dunks the ball in the first half of Game Five of the Eastern Conference Quarterfinals against the Milwaukee Bucks on April 24, 2017 in Toronto, Canada. (Getty)

27-year-old DeMar DeRozan is currently a shooting guard for the Toronto Raptors. But how much longer does DeRozan have left in his contract before he becomes a free agent? And exactly how much money is he making per year?

DeRozan is currently on a five-year deal that began in 2016 and will end in the summer of 2021, according to Yahoo Sports.

While precise figures are never officially released by the NBA, Yahoo Sports reported last year that DeRozan’s contract is worth $139 million. That would make it the second-largest contract in the history of professional basketball. The largest of all time is Damian Lillard’s five-year contract with the Portland Trail Blazers worth $150 million, according to Forbes.

$139 million over five years would translate to about $28 million per year. However, DeRozan’s salary actually breaks down a bit differently.

DeRozan is by far the highest-paid player on the Toronto Raptors. Behind him is Jonas Valanciunas, who makes $15 million, and DeMarre Carroll, who makes about $14.5 million.

DeMar DeRozan has been playing for the Toronto Raptors since 2009, when he was drafted to the team in the 2009 NBA Draft. He previously played for the USC Trojans.

Read More
NBA, NBA Playoffs, Toronto Raptors
27-year-old DeMar DeRozan is currently a shooting guard for the Toronto Raptors. When does his contract end, and how much money does he make per year?