Two famous point guards in the NBA with almost the same name. They have to be related, right?

“The way I got my name. My dad is from Los Angeles, California, he’s a big Laker fan, and he made a wager that if the Detroit Pistons beat the Los Angeles Lakers, he would name his son Isiah Thomas,” the younger Isaiah said.

You can also watch the interview on NBALife in which both Isaiah and Isiah talk about the name question.

“We were betting, and I made a bet that I would name my son Isaiah Thomas if the Lakers lost. And the Lakers ended up losing,” Thomas’ father, named James Thomas, confirmed in the video, which reveals that Isaiah Thomas looked up Isiah’s highlights and wore his numbers growing up; opposing fans would sometimes troll him at games, thinking he was related. Now Isaiah considers Isiah a mentor, and they even text each other.

“Somebody always says, ‘Your dad was a horrible coach,’ or, ‘You’ll never be as good as your dad’ — things like that. I just laugh it off,” Isaiah Thomas says of opposing team’s fans who mistakenly think he’s related to the NBA hall of famer.

Isiah Thomas said he felt proud to have someone “identify with my play, my life” by naming their son after him. Ironically, as Isaiah has noted, Isiah was a rival of the Boston Celtics. The two have spoken of their respect for each other.

Thomas has praised his real father, James, on Instagram, writing on one picture of himself with his dad and sons, “Happy Father’s Day! Thanks pops for showing me how to be a man and take care of my responsibilities.” He also wrote, “Happy Father’s Day to my Pops, thanks for raising me into the man I am today!”

His mother’s name is Tina Baldtrip, and Thomas often posts loving comments on social media about her as well. NESN.com reports that the bet occurred in 1998. “After the Lakers topped the Pistons in the 1988 NBA Finals, the elder Thomas made the ill-advised decision to bet a friend that his Lakers again would be victorious in ’89 — with no less than his unborn son’s name on the line,” reports the news site. 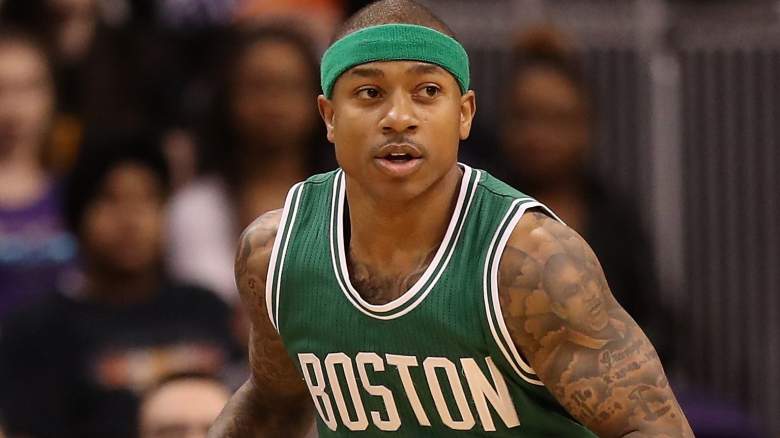 So why are the names spelled differently? The father later decided he just liked the name, but Thomas’ mother insisted that his name bear the extra “a” like the name appears in the Bible, NESN reports.

The Thomas family is in the news for more reasons than the playoffs. Tragically, Chyna Thomas, Thomas’ half-sister, was killed in a car accident April 14. She was the daughter of James Thomas and Isaiah’s stepmother, LaNita, according to The Boston Globe.

James and Tina “separated early in their son’s life,” according to Boston Magazine.

Thomas was born in Tacoma, Washington.

According to SBNation, “As a child he would rush home from church and sneak into his grandparents’ house to watch the Sunday afternoon games on NBC.”

He grew up in Washington State; “Thomas started working on his moves as far back as the fourth grade when he played on his first organized team back in Tacoma,” SBNation reported. In high school, the sports site reports, “he made the difficult decision to move cross-country and attend a prep school in Connecticut.”

The move meant he wouldn’t be with his parents for his final time in high school, but Seattle native and Knicks star Jamal Crawford “told Thomas’ parents he’d look out for their son on the East Coast,” according to SBNation.