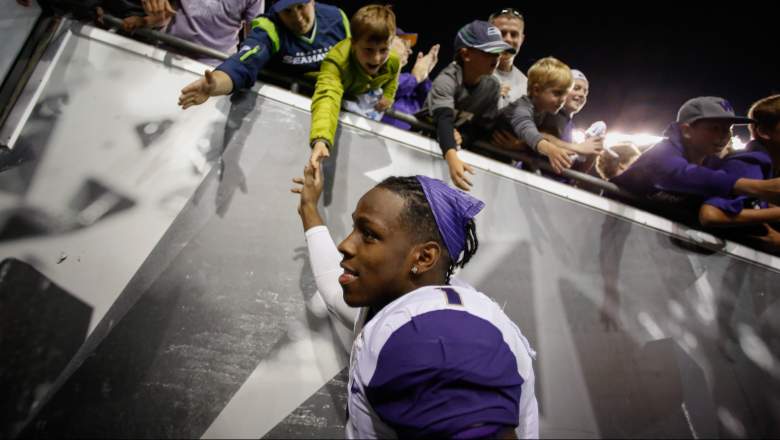 Washington wide receiver John Ross III was drafted, as predicted, in the first round of the NFL Draft, although questions about his durability might lower his stock. Still, Ross was one of 22 prospects who will be at the draft in Philadelphia and was picked by the Cincinnati Bengals.

The Bengals chose Ross with the ninth overall pick. It’s the first time the Bengals have taken a wide receiver in the first round since they drafted A.J. Green in 2011.

Ross is the oldest of six children, and he has four bothers and one sister. His father is John Ross Jr. and his mother is Dayna Mitchell. The 22-year-old, who broke the record with a 4.22 40-yard dash at the NFL Scouting Combine, grew up in Long Beach, California.

Here’s what you need to know about Ross’ family.

1. When His Mother Saw How Fast He Was, She Let Him Join Snoop Dogg’s Snoop Youth Football League

In an April 2017 interview with Stack.com, Ross explained that his mother saw at an early age that he was going to be fast. During a game in his grandmother’s front yard, he was faster than everyone else. His mom saw his speed and knew she had to get him into football. When he was 7 years old, he started playing.

“My mom saw and was like, ‘I need to put you in football,'” Ross told Stack.com.

This is when Snoop Dogg surprisingly walks into Ross’ journey to football. After his mother decided it was OK for him to participate in organized football, Ross caught the attention of the rapper when he was just 9 years old. Snoop saw him running in a parking lot and asked Ross if he wanted to join the Snoop Youth Football League.

Ross gave Snoop his mother’s phone number and his mother let him join. Ross’ mother, Dayna Mitchell, told Sports Illustrated that she actually spoke with Snoop on the phone.

Ross was a member of the league for three years, becoming a “Snoop Youth Football League legend.”

“People always ask me what it was like playing for Snoop,” Ross told SI. “I’m telling you, he actually coached. He was at every practice. He called the plays in the huddle.”

Ross’ speed continued to help him stand out in high school and college. He attended David Starr Jordan High School in Long Beach before heading to the University of Washington in 2013. In 2016, he was named to the First Team All-Pac-12 and the AP Pac-12 Player of the Year.

Ross is the oldest of six children, with four brothers and one sister. His father, John Ross Jr., told the Seattle Times in September 2014 that Ross is a great role model for his younger siblings.

“He’s a special kind of kid,” Ross Jr. told the Seattle Times. “I tell him, ‘Believe in yourself, because you can do anything.'”

In that same Times profile, Ross, who was only a sophomore at the time, said he looked forward to using his football skills to support his family. He said he plays the game for his family.

3. Ross’ Grandmother Convinced Him not to Quit Football During High School

In high school, Ross almost quit football for good because he felt he was being pushed into it by others who wanted to take advantage of his skills. But after his coach called his grandmother, she made sure he got back on track.

“I kept you out of trouble all these years. Football is for you,” she told Ross, notes SBNation.

“Every game you gonna be at, I’ll be there with you,” his grandmother explains, notes the site. “Don’t forget I’m your No. 1 fan. I told him that from day one.”

In the 2014 Seattle Times profile, Ross said he was close to both of his grandmothers, Millicent Ford and Carol Mitchell.

“My family is all about family, and we had a lot of kids,” Ross told the Times. “It was always my aunties, my uncles, my cousins — we’d always be together; we were always close.”

According to a story in a February 2017 profile in Sports Illustrated, Ross became friends with Washington Redskins wide receiver DeSean Jackson because Jackson’s brother Khaled, went to the same as Ross’ father. Khaleed overheard Ross Jr. brag about how fast his son was and told Jackson about Ross.

One day, in July 2016, Ross got a phone call from Jackson, asking him if he’d like to work out with him. Even though he was in Seattle before the Huskies’ training camp started, Jackson got him on a flight to Los Angeles. Jackson and Ross worked out for two hours.

According to SI, Jackson told Ross, “You’re fast, but you don’t have to use all of your speed every single time. Use your speed as a weapon, slow down sometimes. Focus on technique and that’s how you’ll beat your guy.”

Ross said Jackson’s advice helped him to hake his “game to the next level.”

“I looked up to those guys since I was a kid, I watched DeSean in high school and college, all those years in the NFL and I wanted to be that good one day,” Ross told Gazettes.com. “Now I’m working out with him. It’s a blessing.”

5. Ross Says His Mom Calls Him After Every Game

Ross told the Seattle Times in 2014 that his mother calls him after every game.

“My mom calls me after every game: ‘I can’t believe you did that, baby! I’m so proud of you,’” he told the Times. He also gets inspirational messages from his father before games.

Ross has hoped that his speed won’t be the only skill he becomes known for in the NFL. He told USA Today that he hopes he doesn’t get drafted just because he ran a 4.22 at the combine.

“I feel like I’m not exactly one-dimensional like people see,” Ross told USA today. “The media kind of shows that because I did break the record. So I think some people say: ‘Well, he’s only getting drafted because he ran a 4.22.’ That’s not what got me to where I am. Running fast does not put you in a great spot. There’s a lot of guys who ran fast over the years, not to discredit those guys for what they did and the work they put it.”

Ross told USA Today that his ability to catch passes in the red zone is part of what got him to where he is today.