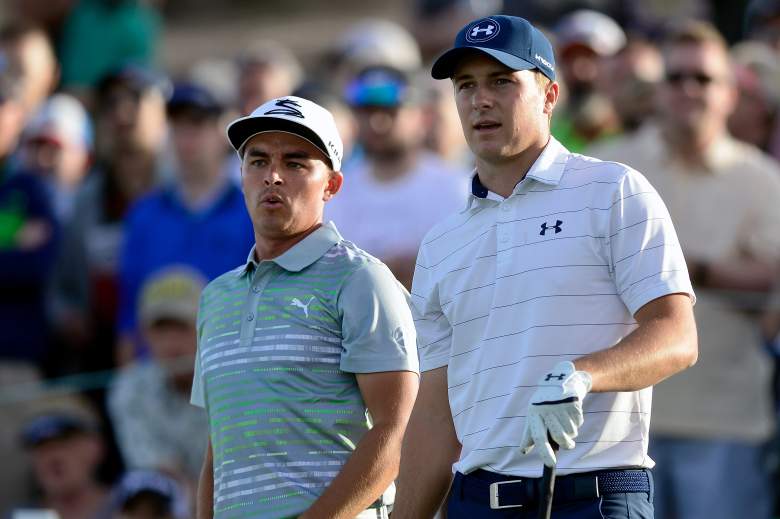 Rickie Fowler and Jordan Spieth are good friends off the golf course. (Getty)

Jordan Spieth and Rickie Fowler are paired up for the final day of the 2017 Masters as both players are in contention to win the tournament. Fowler entered the day in third just one stroke back at -5 while Spieth is two strokes back at -4.

The duo are great friends but will be fighting for the same green jacket in Augusta. Spieth and Fowler are often joined by Justin Thomas and Smylie Kaufman to complete their foursome of friends.

There’s this video Fowler posted on Snapchat of the friends vacationing together in the Bahamas:

The trip took place last summer and was dubbed #SB2K16 by the fellas on social media. Fowler spoke with Golf Digest about the ability to have fun together.

Fowler joked on Instagram about Thomas and Kaufman not watching them play at a recent tournament.

@jordanspieth can you believe that @justinthomas34 and @smyliekaufman10 aren't coming to watch us tomorrow?? #meow

“It’s probably going to be one of the busiest summers that any of us have had coming early in our careers. It was nice to be able to get away, kind of recharge, reset and especially get ready for the stretch that we have coming up,” Fowler told Golf Digest.

Fowler and Kaufman are apparently such good friends with Spieth they were able to joke about his Masters meltdown as this video shows:

On the golf course, Spieth has had a better run than Fowler thanks in large part to his incredible 2015 where Spieth won two majors (Masters and U.S. Open). Fowler is not only searching for his first win at Augusta but his his first major, period.

Spieth has nine PGA Tour victories compared to Fowler’s four tournament wins. While Fowler would love to get the better of Spieth on more occasions, he spoke with the Denver Post in February about how it helps him to see his friends do well on the golf course.

“It’s fun seeing it. It’s motivating to see my friends go win. And to have them texting me last night and wishing me the best, telling me to go get it done, it’s a fun group to be part of because we’re all trying to push each other to be the best players we can be. We love seeing each other play well. And we love beating each other when they’re at their best,” Fowler told the Denver Post.

On Sunday, Fowler will look to get a green jacket of his own to match his friend.