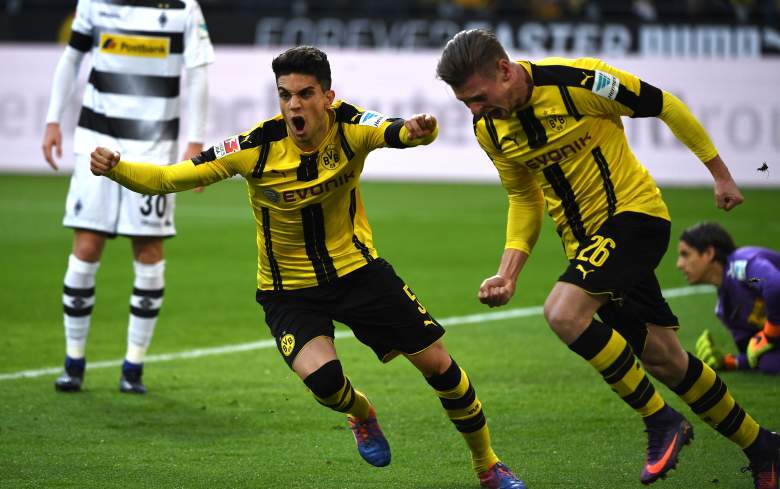 Tragedy struck as a bus explosion caused the Dortmund-Monaco Champions League match to be postponed. Dortmund’s Marc Bartra was the only player reported to be injured.

According to BBC, three explosions hit the team bus carrying the Borussia Dortmund team. Bartra sustained injuries and had to be taken to the hospital.

The team released this statement after the incident. “There was an incident shortly after the BVB Team Bus left the hotel en route to the stadium. The bus was damaged in two places, while a person sustained injuries and was taken to hospital. We will provide you with more information as soon as we know more,” the statement reads (via Express).

Bartra was the player injured that the statement references. The Guardian reports Bartra sustained injuries to his arms. FOX Sports reported Bartra had to undergo wrist surgery. Here’s hoping for a speedy recovery.

1. He Grew Up Playing for FC Barecelona But Left For Borussia Dortmund

While Bartra had a history with Barcelona, he made the decision to sign with Dortmund. He has also played for the Spanish national team. Bartra has a history of winning wherever he goes. According to Bundesliga.com, he has played on teams that have won the Champions League, two Spanish Cups, two UEFA Super Cups, two Spanish Super Cups and the World Cup.

Bartra started playing for the Barcelona youth teams in 2007. He stayed with the club until the summer of 2016. It was a difficult decision but one that he felt he needed to make for his career. He wrote a heartfelt message to his fans on Facebook (via Bundesliga.com).

I want to give special thanks to every single Barca fan. The fondness and love that you have made me feel every day I have been in this home have served me to keep moving forward, fighting and making sense of all the work I put in to keep defending this team and our colours. I move on with a warm heart.

2. Bartra’s Wife Is Melissa Jimenez Who Is a Sports Journalist

Bartra and his wife, Melissa Jimenez, share a love of sports. Jimenez is a Moto GP journalist. According to Hola.com, the couple got married in Barcelona in 2016. Bartra was meeting Jimenez for a movie and proposed to her at the theater.

After the proposal, Jimenez posted a photo with Bartra on Instagram showing off her new engagement ring. The caption read: “Yeeessssss!!!! ? #wedding ?????✌?️ T’estimo vida!!!! ❤️”

3. The Couple Has a Daughter & Bartra Had a Celebration That Went Viral After Her Birth

The couple has a daughter named Gala. Both Bartra and Jimenez are proud parents who often take to social media to show off their young girl. Bartra tweeted out this photo when Gala was a baby.

After she was born, Bartra scored a goal and created a celebration that ended up going viral. After the goal, Bartra grabbed the soccer ball and put it under his shirt like he was pregnant and sucked his thumb like he was a baby.

4. Bartra Has a Twin Brother Who Is a Youth Soccer Coach

Bartra’s twin brother, Eric Bartra, is also involved with soccer. While Eric spent time in the lower ranks, he has transitioned to life as a youth soccer coach. Bundesliga.com explains their unique relationship.

“Bartra joined Barca’s acclaimed la Masia academy from neighbours RCD Espanyol at the age of 12. His twin brother also came through the ranks at the Catalan giants, but nowadays is a youth football coach.”

5. Bartra Was Injured in a Bus Explosion Prior to a Champions League Match

According to The Guardian, Roman Bürki was sitting next to Bartra on the bus and recounted the story of the explosion.

“The bus turned on the main road when there was suddenly a huge bang, a proper explosion. The police were quickly on the spot and handled the situation. We were all in shock … After the bang we all ducked and those who could lie on the floor did so. We didn’t know what was going to happen next,” Burki told The Guardian.

Read More
Soccer
Dortmund's Marc Bartra has been injured in an explosion prior to the Champions League match. Learn more about Bartra and the people close to him.