While the NBA MVP award will not be announced until after the season, fans want to know if there is a way to find out whether Russell Westbrook or James Harden have the advantage in voting. As Heavy has detailed, the process is different this year, and the MVP will not be awarded until a post-season ceremony.

There are 100 voters and SB Nation has been able to track down first place votes for 59 people. You can check out the spreadsheet with their full findings here, but we’ll provide a summary.

This does not mean Westbrook has won the award as SB Nation has still been unable to track down votes from nearly half of the participants. It does show just how close this race is.

Given how Westbrook closed out the season, it indicates Westbrook is the favorite to win the award. Bill Simmons recently wrote a column on The Ringer about why he voted for Harden:

I loved watching Westbrook this season. Repeat: I loved it. I never imagined we’d see a Big O/triple-double sequel, just like I never imagined that Kobe could average 35 a game, or that Ron Artest could fight an entire section of Pistons fans without getting shanked. But if it’s down to Harden and Westbrook, and both sides are relatively equal, and we’re voting on offensive impact and team success over everything else and that breakdown comes down to this …

… I mean, what are we arguing about? And why the hell did it take me so long? I’m picking James Harden.

While we won’t single out an individual who voted for Westbrook, there seems to be a consensus among #TeamWestbrook. He has had one of the best statistical seasons in NBA history and became the first player to average a triple-double since Oscar Robertson did it in 1961-62. Fans will have to wait until June to find out if it is good enough for him to win the award. 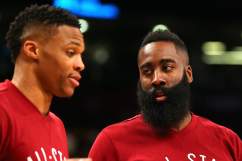 NBA MVP Voting 2017: When Is the NBA MVP Announced?