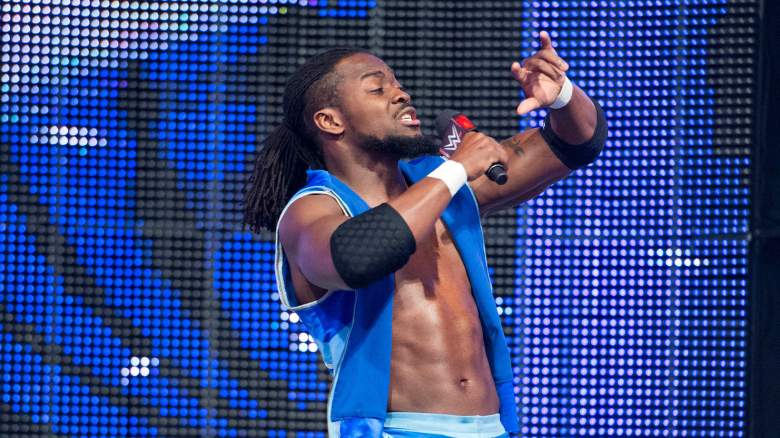 Kofi Kingston has sustained an ankle injury and will be undergoing surgery, the WWE announced on Monday. So how long is Kingston expected to be taken out of action?

In its announcement of his injury, the WWE said that Kingston will be gone for “several weeks.” Major elements of this injury are clearly scripted, though, and so it’s unclear how accurate that timeline is.

If it is accurate, this would mean that Kingston may not be back in time for Payback, the first Raw-branded pay-per-view following WrestleMania. That pay-per-view airs on Sunday, April 30th. There may not have been plans for The New Day to have a match on that show anyway, though, as the current Raw Tag Team Champions are The Hardy Boyz and the number one contenders are Cesaro and Sheamus.

However, the rumor for the past week has been that The New Day will be drafted to SmackDown Live from Raw in the superstar shake up. If that’s the case, Kingston could possibly be ready for the next SmackDown pay-per-view: Backlash, which airs on May 21st, 2017.

The official story from the WWE is that Kofi Kingston broke his ankle when he was attacked by The Revival last week. That attack came after a match between The New Day and The Revival. Clearly, this is not when Kingston was really injured, as the segment ended with a Dash Wilder jumping off the top rope and “landing” on Kofi Kingston’s ankle, even though he and Kingston don’t seem to ever make contact.

A few days ago, Big E posted a photo on Twitter of Kofi Kingston in a hospital, presumably about to undergo surgery. The theory among fans, then, is that Kofi Kingston really does need surgery, but it’s not as a result of anything that happened during Raw last week, and this segment with The Revival was simply the WWE’s way of conveniently writing Kingston off television.

Don't go into the light! pic.twitter.com/3Gs4d7t6JD

We’ll learn more about the extent of Kofi Kingston’s injury throughout the week, so check back in soon for further updates.