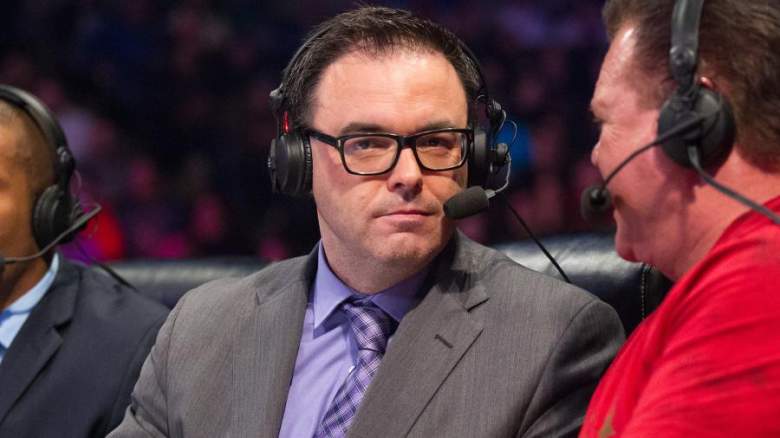 Mauro Ranallo has been missing from ‘SmackDown Live’ for several weeks. (WWE.com)

SmackDown Live commentator Mauro Ranallo may be leaving the WWE.

Fans noticed on Friday that Ranallo has removed any references to the WWE from his Twitter bio; it used to say he is a WWE commentator, but now the bio simply reads, “SHOWTIME Boxing/@rutten_ranallo/ COMBAT SPORTS CAROUSEL/ Mental Health Advocate.”

In addition, Ranallo has deleted several tweets about his absence from the WWE. On March 24th, Ranallo had tweeted, “I’m deeply touched by your tweets of support. My doctor wants me to stay off social media for now but I wanted to thank you.” This tweet has been deleted.

On March 29th, Ranallo also tweeted about WrestleMania, saying that he won’t be there and that he wishes everyone luck. He wrote, “Feeling love from everyone. I am stronger. I want to wish my @WWE family another AMAZING #WrestleMania #KeepUpTheGoodFight #MentalHealth.” This tweet has also been deleted.

One tweet Ranallo has kept up, however, is a quote from Khalil Gibran: “Out of suffering have emerged the strongest souls; the most massive characters are seared with scars.”

Ranallo suffers from bipolar disorder and depression, and this is the reason he has been absent from SmackDown Live for several weeks. Bas Rutten, Mauro Ranallo’s co-host on the Rutten and Ranallo podcast, recently said on Sirius XM that Ranallo is doing okay.

“As everybody knows – he’s very vocal about it – Mauro is bipolar,” Rutten said. “Sometimes, a couple of times a year, things are going too fast and he needs to just simply slow down. But he’s doing good. I talked to him, he’s sending me funny video clips, he just sent me something – I didn’t take a look at it… but a happy thing – it’s all in good spirits. I think he will be back to normal very soon.”

Backstage, there have been some rumors about John Layfield, a.k.a. JBL, bullying Mauro Ranallo. In a new book written by Justin Roberts, former WWE ring announcer, Roberts accuses JBL of being a bully backstage. JBL recently responded on Twitter by saying that Justin Roberts is an idiot who everyone hated.

I won't answer Net rumors-but I didn't take Justin Roberts passport. Could have been anyone/he was hated by the whole crew. He's an idiot.

Read More
Pro Wrestling, WWE, WWE Raw, WWE Smackdown
﻿SmackDown Live ﻿commentator Mauro Ranallo may be permanently leaving the WWE, as he has deleted all references to the company from his Twitter page.