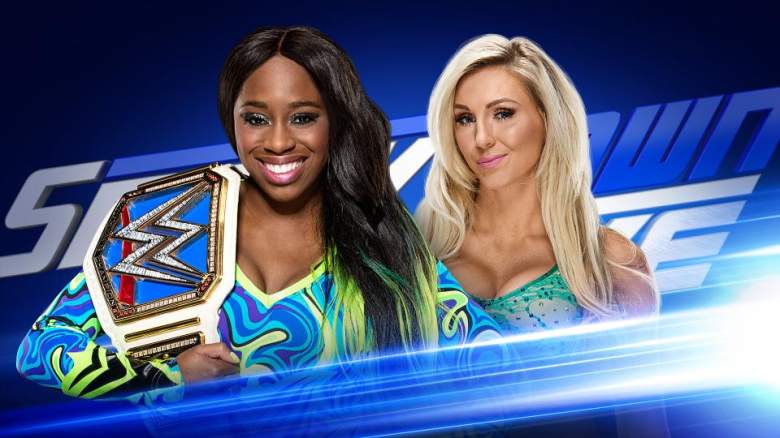 A new episode of SmackDown Live is currently airing live on the USA Network. Here’s what has happened so far:

9:23 – Breezango defeat The Ascension in a Beat the Clock challenge. They do so in less than five minutes and 17 seconds, making them the new number one contenders for the SmackDown Tag Team Championship.

9:22 – As the show returns from commercial, Jinder Mahal is shown leaving the arena in his limo holding up Randy Orton’s World Championship.

9:12 – After the match ends, Randy Orton assures Bray Wyatt that the House of Horrors match will be his eternal hell. Jinder Mahal then enters and says that he is the true horror and Orton should be scared of him. He then attacks Randy Orton and holds up the title.

8:51 – Backstage, Becky Lynch says that he doesn’t approve of Charlotte’s methods, but she can appreciate her results. Becky is interrupted by Carmella, Natalya, and Tamina, who tell her that she’s either with them or against them.

8:50 – In a prerecorded video, Rusev says that he doesn’t like Daniel Bryan and Shane McMahon, and he has told them that he’ll only come wrestle for SmackDown if he gets a match at Money in the Bank.

8:29 – Backstage, Charlotte says that every superstar has blood running through their veins, but gold runs through hers. After dominating the Raw roster, the queen needs a new kingdom, Charlotte says.

8:16 – AJ Styles defeats Baron Corbin. Towards the end, Kevin Owens, who is sitting in on commentary, starts yelling at AJ Styles from ringside, and Styles kicks him in the face. After the match, Owens attacks AJ Styles, and Corbin joins in. But then Sami Zayn runs out to attack Kevin Owens, and Zayn then goes after Baron Corbin. Owens comes back and takes down AJ Styles, and the segment end with Owens standing victorious holding the United States Championship.

8:00 – Shinsuke Nakamura enters, and he’s going to be interviewed by Renee Young. But before she gets a chance to get any answers out of him, Dolph Ziggler enters. Ziggler mockingly asks Nakamura a bunch of questions, but Nakamura won’t play along. Ziggler says that Nakamura is not who everyone thinks he is: Ziggler poses a theory that Shinsuke Nakamura is literally Michael Jackson in disguise. Nakamura asks Ziggler what his problem is and calls him a jackass. Ziggler then attacks Nakamura, but Nakamura is able to turn it around and retaliate. Ziggler retreats.